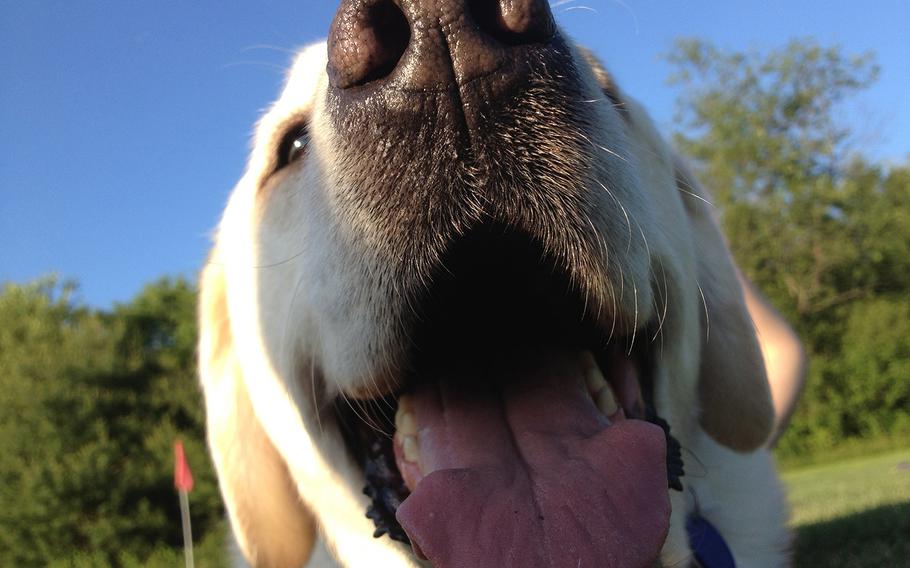 Sooner, a 6-year-old yellow lab, has been working as a service dog for injured veteran Alexis Courneen since 2009. The dog recently needed surgeries on two legs, but paying for that work has been caught up in bureaucratic confusion. (Courtesy of Alexis Courneen)

Sooner, a 6-year-old yellow lab, has been working as a service dog for injured veteran Alexis Courneen since 2009. The dog recently needed surgeries on two legs, but paying for that work has been caught up in bureaucratic confusion. (Courtesy of Alexis Courneen) 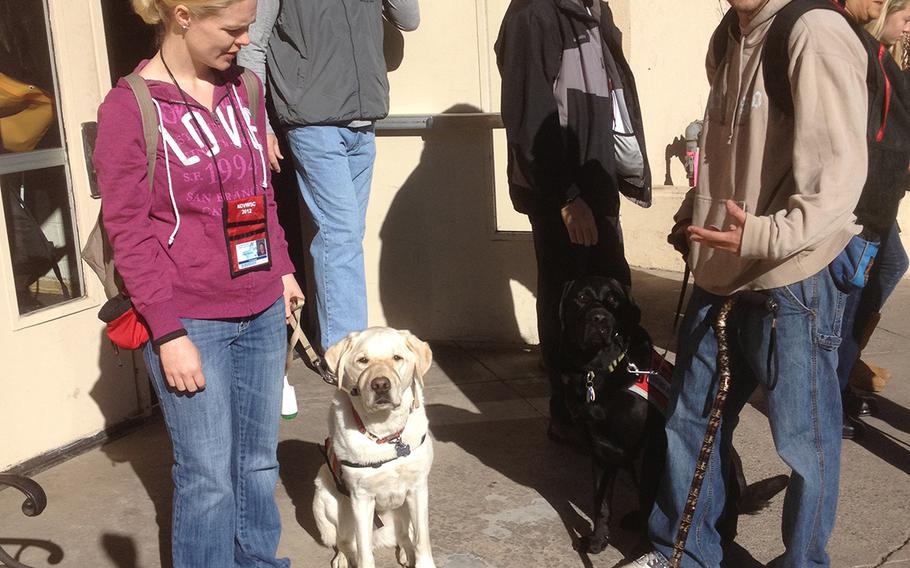 Alexis Courneen and her service dog, Sooner, pause outside a veterans event. Courneen said she was fearful of going out in public before receiving Sooner as an assistance animal. (Courtesy of Alexis Courneen) 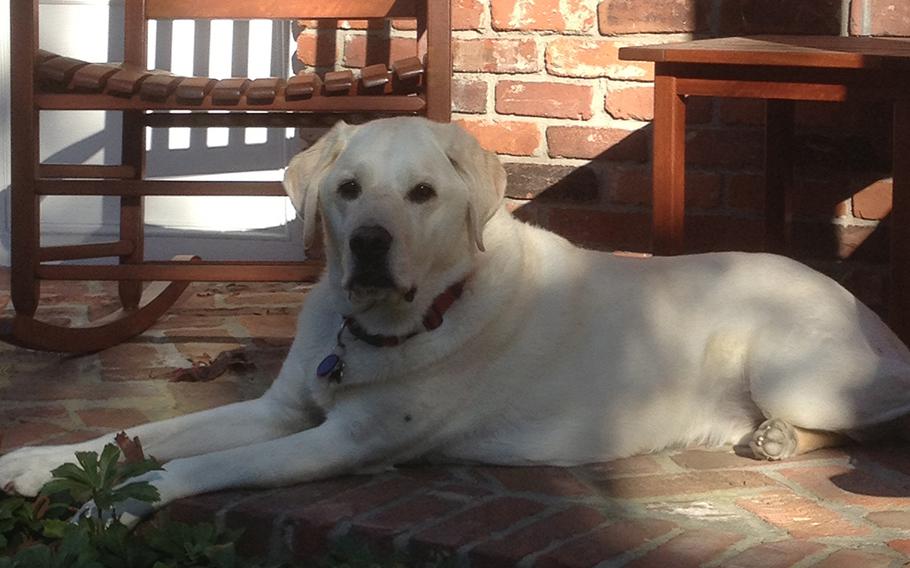 Sooner relaxes outside the Courneen's home in Massachusetts. The service dog needed ACL surgery on two legs, but veterinarians believe he can still perform his assistance duties for another five or six years. (Courtesy of Alexis Courneen) Alexis Courneen and her service dog, Sooner, relax at the family's home in Massachusetts. Courneen said dealing with the VA to get Sooner's surgeries paid for has been stressful and exhausting. (Courtesy of Alexis Courneen)

WASHINGTON — Alexis Courneen’s 6-year-old yellow lab Sooner is a beloved family member and the one who convinces her its safe to leave the house each day. But to the Department of Veterans Affairs, the dog is just another piece of equipment.

And a broken one at that.

The service dog just underwent his second ACL surgery this year and is rehabbing in an effort to return to his full duties. Without him, Alexis — an injured Coast Guard veteran — struggles with everyday tasks.

“He’s been a part of my healing in ways I never thought,” the 34-year-old said. “He helps with my balance and can alert bark if I’m in trouble. But he’s also given me the confidence to go out in public and try things like public speaking.

“But under VA rules, he might as well be scrap metal.”

VA officials paid for the dog's first surgery but balked at the second, even though veterinarians insist Sooner still has years of productive work ahead of him.

Earlier this year, they told Alexis that the dog should be “retired.”

After she went ahead with the surgery, officials said her family could lose all financial support for the animal from the VA, since they still question whether he’s fit for duty. That might mean a few hundred dollars in medical visits and new harnesses. Or it could mean thousands if he needs more surgery.

Department reviewers have relented on some of those threats and are reviewing the case. But the incident — and the stress it has put on the family — underscores the new and complex challenges facing VA leaders with a new generation of wounded warriors and innovative treatments.

Service dogs fall under the VA’s prosthetics department, where officials are more accustomed to replacing artificial limbs than canine tendons. The department has held some oversight on the animals since the 1960s, but published revamped rules a year ago to better handle the growing number of guide, hearing and mobility dogs.

About 500 of the service animals fall under official VA guidelines today. Many, like Sooner, will reach their end of their expected service duties in the next few years. How they’ll be cared for — or replaced — remains a complicated, potentially heartrending challenge.

Alexis’ husband, Jason, said it’s difficult to quantify just how much Sooner has meant to the whole family.

“There was a time before where (Alexis’) spark was gone,” he said. “She was very self-conscious. She would rather stay in than show strangers any weakness. I planned my whole day around not being more than 15 minutes away from home, in case she needed me.”

Alexis suffered traumatic brain injuries and serious spine damage in an on-duty construction accident in 1999. The back injuries forced her out of the Coast Guard. The brain damage — which went undiagnosed for three years — left her scattered and unable to hold a job.

She’s rated 100 percent disabled now. But not having to work didn’t solve the family’s problems.

Until Sooner arrived in 2009, Jason and the couple’s two young daughters were afraid of leaving Alexis unsupervised for any length of time because of her penchant for falling. Any trip outside the home was an exhausting chore.

Today, their lives are completely changed.

The family actually owns four dogs, but only three are pets. Alexis’ daughters have known from day one that Sooner isn’t there just for back rubs and playing outside.

If Alexis stumbles, Sooner helps keep her upright. If she drops her phone, Sooner retrieves it from the floor without command. If she gets hurt, Sooner can alert the neighbors or even call 911.

“He’s given Alexis — he’s given all of us — our independence back,” Jason said.

The cost of surgery and rehab for his first ACL operation in January totaled about $5,000. Jason said VA was slow to approve and reimburse those expenses, but by late spring the bills were covered.

But after months of rehab, the veterinarians suspected he’d need a second ACL procedure on his other side. His gait wasn’t corrected, and his movements were labored. The animal's every action appeared slowed and painful.

Service dogs like Sooner typically have a working life of about a decade. Alexis and Jason said they talked about getting a new service dog, but their veterinarians were confident that wasn’t needed. With the second surgery, Sooner could work as a service dog for five more years.

“If the vet had said, ‘The dog can’t do this anymore,’ we were ready to accept that,” Jason said. “This wasn’t us being too emotionally attached.”

In addition, a new service dog could take up to two years to obtain. Surgery could be done within days — if VA didn’t drag their feet this time. The Courneens scheduled the procedure.

Just before the time the surgery was scheduled to take place, VA officials said they wouldn’t pay for it.

VA officials had ordered an MRI on Sooner’s back, to make sure there wasn’t another underlying injury that could complicate recovery. But a consultation briefing from VA officials shows that prosthetics department policy makers decided Sooner was no longer useful even before the MRI results came back.

The report, authored by VA Boston Healthcare System associate director Dr. Rodney Dismukes, also questioned whether it was fair to deny paying for the surgery, because rules regarding such requests are unclear.

“There does not appear to have been developed a national VA policy … regarding the veterinary benefits available to VA supported service dogs,” the report stated.

Replacing a service dog like Sooner costs about $25,000, but VA doesn’t absorb any of those expenses.

Outside charities pair disabled veterans and the dogs, and after a review VA officials will then take over some costs associated with care and upkeep: prescriptions, harnesses or equipment to perform specialized tasks, and handler training.

The department was scheduled to purchase health insurance for all VA-approved service dogs earlier this year, but that move has been held up in legal questions for months. Arbitrators are scheduled to rule on a contractor’s technical complaint in December, allowing the department to move ahead with the service dog policies.

When Sooner’s back MRI showed no complicating injuries, Alexis gave her veterinarians the go-ahead for the second ACL surgery, assuming VA would OK the plan. When they didn’t, she lost it.

“When they told me a week later that Sooner needed to be ‘retired,’ I lost it,” she said. “I was a puddle on the floor. The stress was too much.”

The family decided to move ahead anyway and worry about the expense later.

A few days later — after some behind-the-scenes calls from veterans advocates — VA officials recanted that decision and said they were still reviewing the case. They indicated the VA might cover the expense of a second surgery, as long as the family hadn’t already gone ahead with the operation.

By then, Sooner was back home, recuperating. Alexis didn’t know if she’d be allowed to keep him even after he fully recovered.

The episode has been infuriating for service dog advocates, several of whom have been working with the Courneens and VA for years on developing guidelines.

“This is not the last veteran who’s going to have an issue like this,” said Christina Roof, a national assistance dog policy expert. “The way this was handled is completely unacceptable.

“After 3 years of assisting VA in the development and implementation of their service dog program, there are still no formal procedures in place to address common issues like what the Courneens have experienced. They’ve failed to implement proper policies.

“All of this could have been avoided if better planning was in place. Instead, a problem came up, and everyone dropped the ball. And that caused undue and avoidable stress on Alexis and her family.”

VA officials said service dogs didn’t end up under the prosthetics department by chance. “Although the term ‘prosthetic device’ may suggest images of artificial limbs, it actually refers to any device that supports or replaces a body part or function,” said VA spokeswoman Gina Jackson.

But at regional offices, the individuals in charge of service dog decisions are more typically tasked with concerns about high-tech leg replacements and wheelchair purchases. With only a few hundred dogs nationwide in VA’s care, the issue doesn’t yet demand a single set of specialized staffers.

That leave many veterans to sort through their questions by themselves.

Alexis and Jason still have a $5,000 surgery bill. Recent correspondence with their regional VA contacts had been positive, hinting the bill could be paid soon.

But earlier this month, officials said the surgery should have been covered by fiscal 2013 funds, and since it’s already fiscal 2014, they might not be able to backdate the money.

For now, the Courneens are focused on getting Sooner back to full health and back to work.

“When Sooner came to after the surgery, the first thing he did was to pick up the corner of his blanket and hand it to me, because he thought he should be working,” Alexis said.

“When it’s time for him to retire, we’re open to that. But he doesn’t want to retire yet.”