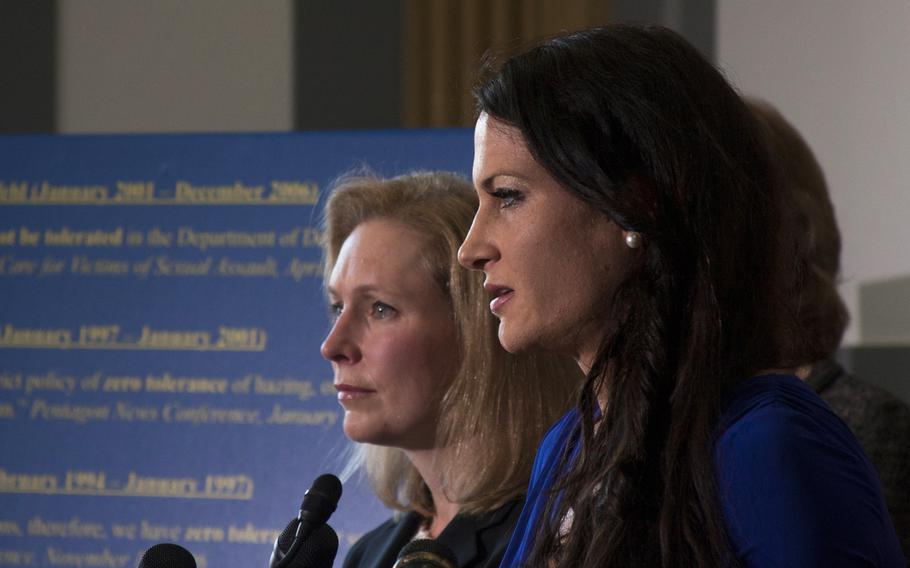 WASHINGTON — Reports of sexual assault in the military jumped 46 percent from the same point in 2012, new Pentagon figures show.

There were 3,553 sexual assault complaints Defense Department-wide in the first three quarters of the fiscal year, from October 2012 through June, compared to 2,434 over the same period a year earlier.

The numbers include sexual assaults by civilians on servicemembers and by servicemembers on civilians. According to The New York Times, which first reported the numbers in Thursday editions, sexual assault was defined in the report as rape, sodomy and other unwanted sexual contact, including touching of private body parts. It did not include sexual harassment, which is handled by another office in the military.

Military officials cast the increase of reported complaints as an increased willingness among victims of assault to come forward. But the numbers are also the latest in a series of developments underscoring the problem, which has vexed Pentagon officials and drawn fire from Congress and the White House.

In a twist, the Pentagon found that a substantial number of the reported cases of sexual assault — something less than 10 percent — occurred before the victim entered the military.

“Folks have heard about the services and programs that we have for victims, and they are walking in the door to get those services,” Patton said. “This is a strong indicator that people have heard our message and believe we are going to take care of them.”

In its latest annual report on sexual assault in the military, the DOD estimated there were roughly 26,000 acts of unwanted sexual contact throughout the services in fiscal 2012, though the number of reports of such incidents would be much lower. The DOD estimates only about 11 percent of sexual assaults are being reported.

The release of the new data comes at a time when Congress is considering changes to the military justice system that would give sexual assault victims more resources and possibly reduce the power of military commanders to reverse the convictions of offenders.

The defense bill set to come to the Senate floor this month includes various changes to the military justice system:

Sen. Kirsten Gillibrand, D-N.Y., will offer an amendment that would take sexual assault cases outside the chain of command and give military prosecutors, rather than the accusers’ commanders, the power to decide which cases to try. Pentagon leaders strongly oppose Gillibrand’s amendment. Sen. Claire McCaskill, D-Mo., is pushing legislation that would strip commanders of their ability to overturn jury verdicts and mandate dishonorable discharge or dismissal for anyone convicted of sexual assault, but would keep control of court-martial proceedings within the chain of command. This measure is supported by the Pentagon and Sen. Carl Levin, D-Mich., chairman of the Armed Services Committee. Sen. Barbara Boxer, D-Calif., would exempt victims of sexual assault from having to testify at what the military calls Article 32 pretrial hearings, which can include cross-examinations of victim that are so intense they prevent many victims from coming forward. Boxer’s bill has 12 co-sponsors so far, including the support of influential Republican Armed Services committee members, and may be better positioned to reach a 60-vote threshold in the Senate because it would not directly affect the military chain of command. It also has a companion version being introduced in the House, by Jackie Speier, D-Calif., and Patrick Meehan, R-Pa.

Boxer’s bill also has the support of Protect Our Defenders, whose president, Nancy Parrish, said in a statement that the changes “will inject legitimacy and order back into the system.”

“Article 32 hearings were originally designed to function as a probable cause hearing. However, they have been transformed into a ‘mini-trial’ before the actual trial — where the victim’s credibility and character are attacked,” Parrish said. “The most personal and intimate details of victims’ life are exposed in open court, and the victim is forced to publicly relive the attack in front of her assailant.”