As school starts in Pacific, new standards in place 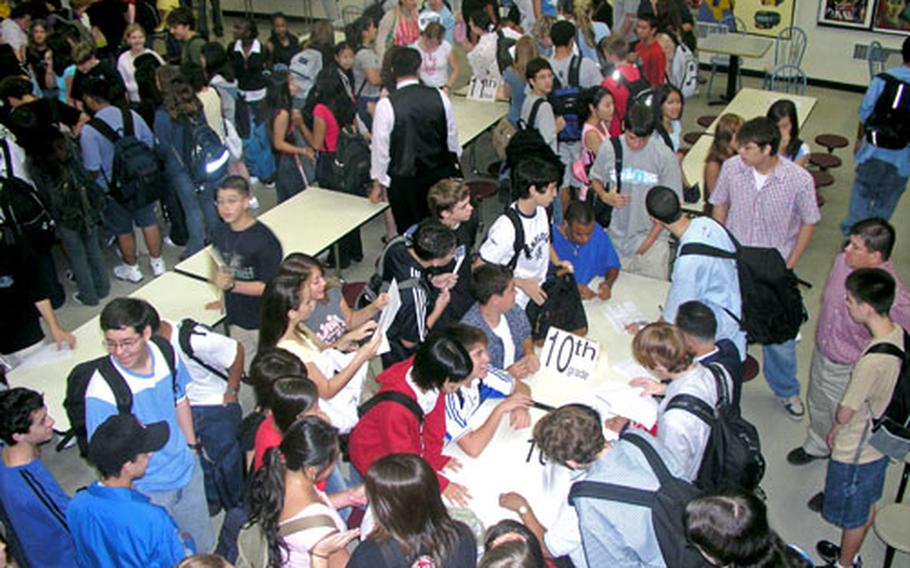 Students flock to Osan American High School on Osan Air Base, South Korea, in August 2004, just as more than 20,000 DODDS students throughout the Pacific will do Tuesday, the first day of the school year. (Franklin Fisher / S&S)

School starts Tuesday for more than 20,000 students in 45 schools in Department of Defense Dependents Schools-Pacific, including Guam.

Academic requirements haven&#8217;t shifted much, but the bar already is raised, with this year&#8217;s junior class required to earn a 2.0 grade-point average to graduate &#8212; a requirement implemented several years ago. And incoming sophomores need 26 credits &#8212; instead of the current 24 &#8212; for a diploma.

The 2005-06 school year will usher in a few other changes, including new science standards that emphasize inquiry and hands-on learning, as well as more frequent informal classroom testing so teachers can better gauge student comprehension.

Reporting to work Tuesday will be 282 new teachers in mainland Japan, South Korea, Guam and Okinawa, including 99 local hires. As of Thursday, 23,285 students had registered for school, said DODDS Pacific spokesman Charles Steitz, about 1,500 less than projected. The Japan District currently is down by about 900 students, but Steitz said enrollment is increasing daily and typically fills out by Sept. 30.

Though schools have adopted new science standards and updated their textbooks, the curriculum won&#8217;t change much, Bresell said, but the learning process will. The new standards emphasize inquiry-based learning and instruction.

&#8220;There&#8217;s a belief that the best way of learning some of these scientific concepts is by doing experiments that lead the students to discover on their own what these concepts are,&#8221; she said. &#8220;Teachers pose questions to the students and let them research and experiment to come up with the answers.&#8221;

The debate heating up biology class in some U.S. school districts squaring evolution against &#8220;intelligent design&#8221; is not playing out in DODDS Pacific schools, Bresell said.

Critics of Charles Darwin&#8217;s theory of evolution contend that life is too complex and diverse to be explained solely by natural selection and argue that a higher being also must have had a hand in creation.

DODDS Pacific schools&#8217; students can, however, expect to see more informal classroom testing this year as a part of the new &#8220;Assessment for Learning&#8221; initiative.

Typical assessments are usually done at the end of a school year to show school or individual student progress. Through &#8220;Assessment for Learning,&#8221; teachers are being asked to test students more often to gauge whether they understand new material &#8212; and change instruction based on the results, either for individual students or for whole classes, Bresell said.

Teachers this year also will be trained on new Department of Defense Education Activity math standards and materials, which are to be implemented next year, Bresell noted.

DODDS Pacific schools this year also will continue to focus on improving student achievement in reading through the Pacific Literacy Project, which uses three levels of intervention to support students who need help in reading.

A new Web-based data system up and running in all the districts should improve access to school and student information at all levels, Bresell said. Teachers will be able to input data such as student grades and attendance in their classrooms, for example, that can be accessed by the school office and higher headquarters.

A hot education topic in the United States is the federal &#8220;No Child Left Behind&#8221; law, which requires schools to achieve set levels of progress on standardized tests each year or face penalties, including possible withholding of federal education dollars. Some argue that President Bush&#8217;s initiative forces schools to &#8220;teach to the test.&#8221;

While some states such as Texas, Virginia and Massachusetts have adopted high-stakes testing, requiring students to show content mastery on standardized assessments to graduate, Bresell said there&#8217;s no movement to implement the same in DODDS Pacific.