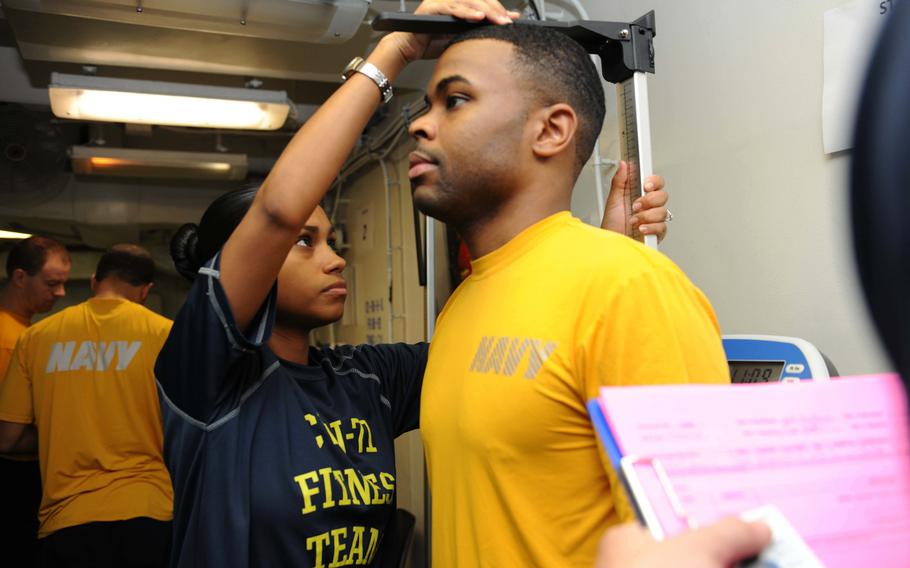 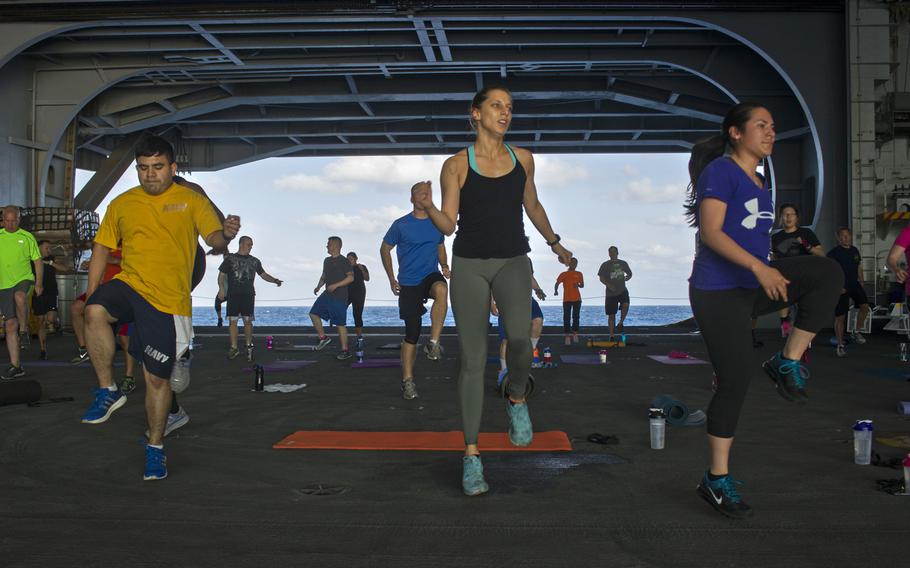 Sailors aboard the USS George Washington participate in a total body fitness class in the hangar bay of the aircraft carrier on May 21, 2015. After some 5,000 sailors failed their PT test last year, the Navy is retooling of its fitness program to includes making gyms available for longer hours and performing fitness ?spot checks? between testing cycles. (Bryan Mai/U.S. Navy) 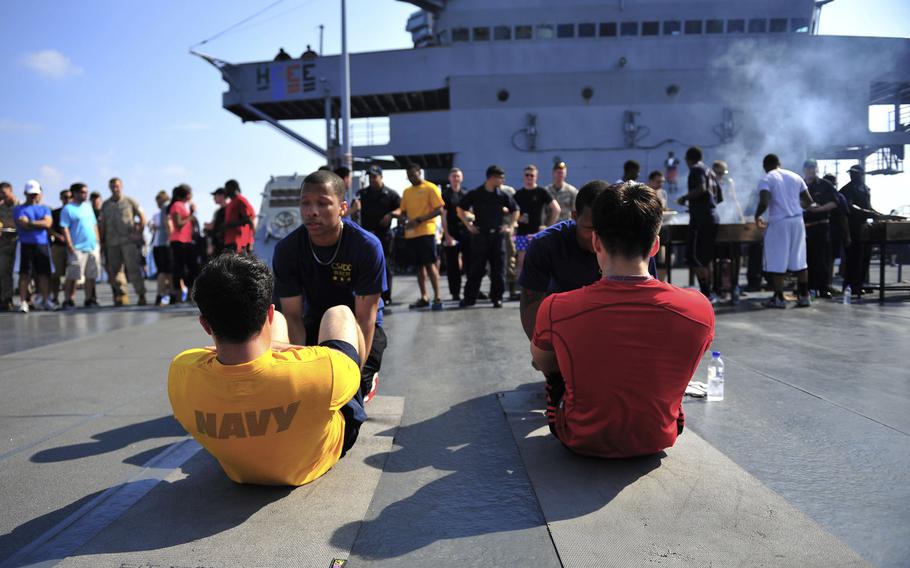 NAPLES, Italy — Last year, some 5,000 sailors failed the Navy’s physical fitness assessment, the majority because they couldn’t “tape-in,” or meet body weight standards calculated by measuring around a sailor’s neck and waist.

The Navy now wants to lower that number who fail by changing its test, part of a broader retooling of its fitness program that includes making gyms available for longer hours, performing fitness “spot checks” between testing cycles and emphasizing diet and nutrition.

While sailors across the service are likely to feel the effects of each change, it is the fitness test — and in particular its body weight component — that has many of them talking.

Some argue that relaxing the standards will lead to less fit sailors. Others say the body weight calculation, known as the body composition assessment, doesn’t reflect the wide range of modern body types.

At the center of the debate is a rule that those who fail the body composition portion are automatically flunked for the full fitness assessment — before they even can take the exercise portion. A single failure can have consequences for a sailor’s career; three such failures in a four-year period result in separation from the Navy.

The fitness test is required twice a year, and only those who exceed the Navy’s maximum weight allowances by height are required to tape-in.

Some sailors say the exercise portion, which is known as the physical readiness test and consists of curl-ups, pushups and a timed 1.5-mile run or similar cardio activity, should be the deciding factor of who passes the overall physical fitness assessment, or PFA. They say failing to meet body composition standards doesn’t necessarily mean a sailor is out of shape.

Others say those doing the measuring often get it wrong, by taping too tightly or in the wrong place.

Vice Adm. Bill Moran, the Chief of Naval Personnel, whose office is leading the changes, has suggested in interviews that while the tape measure isn’t likely to be changed, he believes the body composition standards may need to be relaxed.

“One, we think less folks will actually fail, two we’ll have a better idea of where people stand in terms of fitness and three, we could increase those standards.”

But not everyone is on board.

A list of proposals put together last year by command fitness leaders — sailors who administer the fitness test — called for even tighter standards, including spot body composition assessment checks throughout the year.

“I think people make a lot of excuses,” said Petty Officer 1st Class Brandon Jiles, a command fitness leader at the Naples base. “I think it could be more rigorous, but I would never make that decision for anyone else.”

Yet Moran appears to have the support of Navy Secretary Ray Mabus, who in a May speech at the U.S. Naval Academy called for a move away from minimum fitness requirements and toward a more holistic look at health and wellness.

“Our pass/fail system that only, and often inaccurately, assesses one aspect of overall fitness will end,” he told midshipmen. “We will instead focus on evaluating health, not shape.”

Among the changes he’s focused on are ensuring base gyms are available to sailors with non-traditional working hours, and that on-base day care is available for long enough to allow sailors with children to work out before or after work. Mabus has also pushed for fitness spot checks throughout the year and greater recognition for sailors who earn the top scores on the fitness assessment, whether through a special patch or privileges.

The Navy recently began testing expanded gym and day care hours at its base in Bremerton, Wash., while several other U.S. bases are testing expanded gym hours alone. During his Monday visit to Yokosuka, Stevens said the service was also considering a pilot program that would use electronic monitors to track sailor sleep and activity.

The Navy is expected to roll-out its recommendations later this summer, with changes to take effect in January.