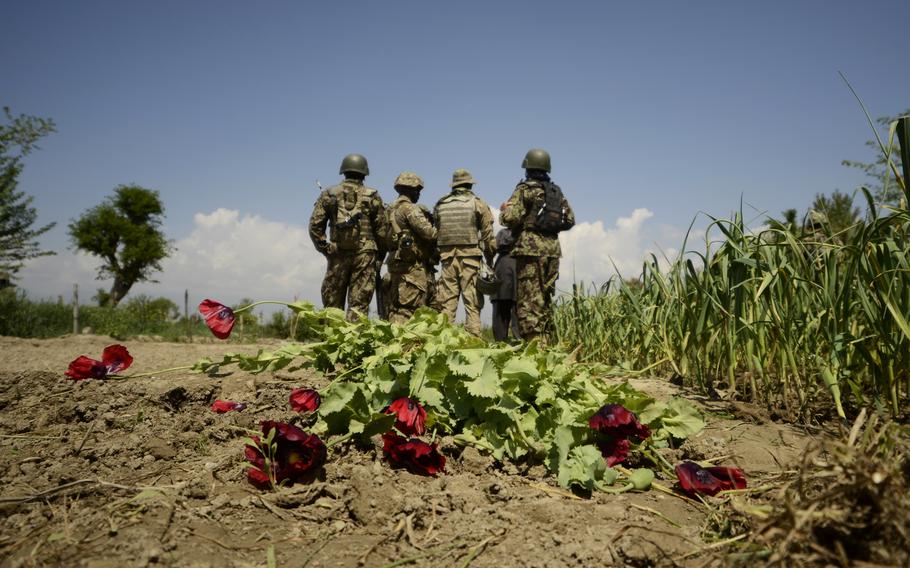 U.S. forces assisted by Afghan Security Forces tell a poppy farmer near Combat Outpost Sabari in eastern Afghanistan's Khost province that he must destroy his crop in April 2012. Some Russian officials say that neither the Afghan government nor the departing international forces are doing enough to combat the flow of illegal drugs from Afghanistan. They fear the problem may only grow after the NATO mission ends. (Joshua L. DeMotts/Stars and Stripes)

U.S. forces assisted by Afghan Security Forces tell a poppy farmer near Combat Outpost Sabari in eastern Afghanistan's Khost province that he must destroy his crop in April 2012. Some Russian officials say that neither the Afghan government nor the departing international forces are doing enough to combat the flow of illegal drugs from Afghanistan. They fear the problem may only grow after the NATO mission ends. (Joshua L. DeMotts/Stars and Stripes) 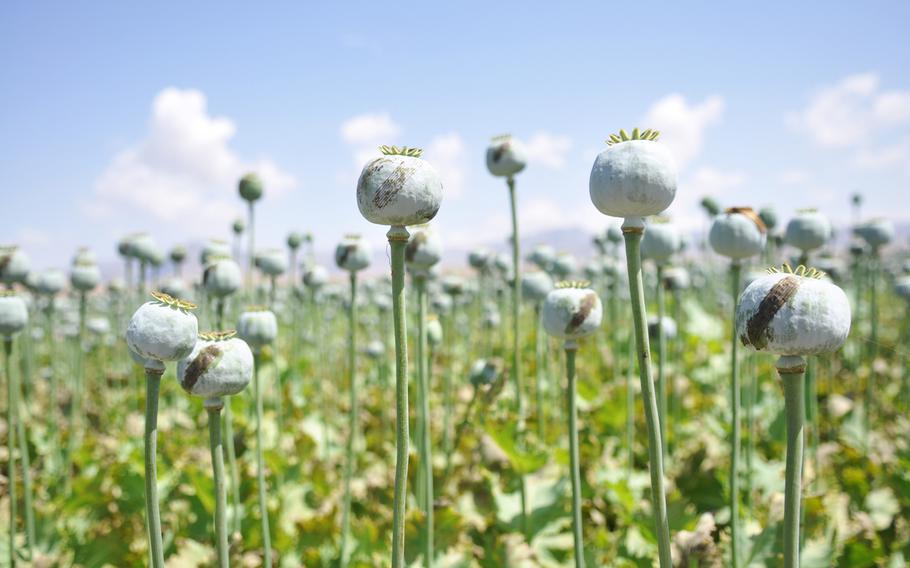 Poppy plants in Deh Rawud district in Uruzgan Province. The plants, which are the source of opium, are the raw ingredient for heroin. (Alex Pena/Stars and Stripes) 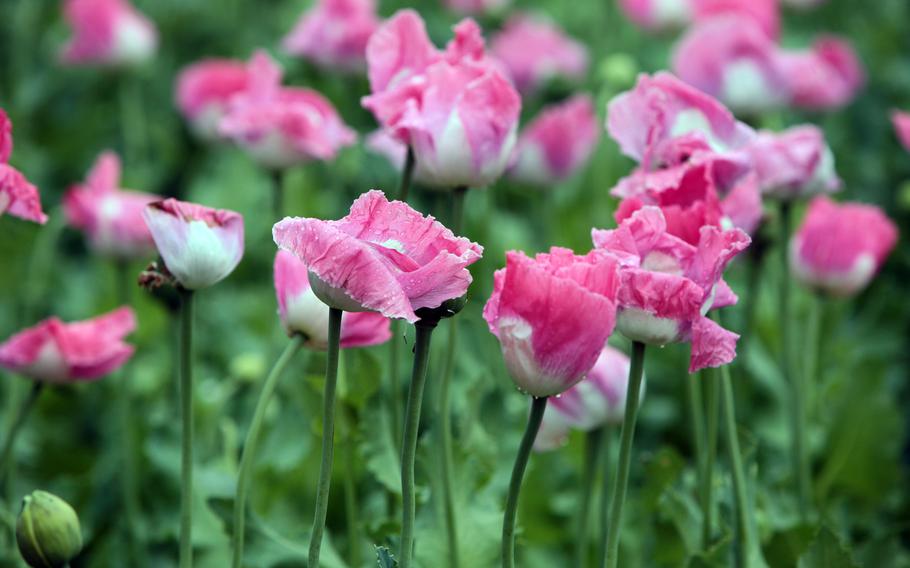 Afghanistan produces more than 90 percent of the world's opium, the base ingredient for heroin. Although growing it is illegal, it's how many farmers, especially in southern Afghanistan make their living. (Stars and Stripes)

As NATO prepares to withdraw most of its forces from Afghanistan next year, efforts to combat the booming drug trade are being hindered by a 21st-century version of the “Great Game” — a struggle between Russia and NATO-member countries for regional influence.

Opium poppy cultivation reached a record high in 2013, despite the international presence and the establishment of a national government. And Russia, which is one of Afghanistan’s biggest customers for opium, fears a virtual “tsunami” of illegal drugs when foreign troops leave.

But Moscow and NATO can’t seem to agree on how to work together to stanch the flow of illegal drugs. Moscow complains that Kabul and NATO are not doing enough, saying they are blocking the kind of cooperation that would make a difference.

As much as a quarter of Afghanistan’s heroin output passes to Russia via Tajikistan and other Central Asian republics of the former Soviet Union. Russian anti-narcotics officials say transnational crime groups use a variety of routes and means to flood their country with the drug. They find eager customers in Russia, which is home to some 1.8 million injection drug users, according to United Nations estimates. As many as 30,000 people a year overdose on the drug and die.

Russian officials are alarmed by the situation, which Viktor Ivanov, director of Russia’s drug control service, has likened to a tsunami.

Alexander Khinshtein, deputy chairman of the Russian Duma’s security and anti-corruption committee, told Stars and Stripes that the drug problem remains one of his main concerns as NATO leaves.

“Afghanistan is a problem not just for us but many countries,” he said.

Richard Weitz, a senior fellow at the Washington-based Hudson Institute, said that finger-pointing over the drug trade has become a new source of tension between Russia and the United States, though the two rivals have managed to cooperate on other issues in Afghanistan.

For example, the U.S. State Department says at least 379,000 military personnel, and more than 45,000 containers of cargo have transited Russia in support of the operations in Afghanistan, and Russian technicians have provided support for maintaining Afghanistan’s small fleet of Russian-made helicopters. The U.S. also says it is working with Russia to disrupt terrorist networks and their means of financial support.

“Russians simultaneously want NATO to combat local terrorists, drug traffickers, and other potential threats to Russia while opposing a Western military presence in the former Soviet republics of Eurasia,” Weitz said. “They want to keep Western counternarcotics efforts focused inside Afghanistan rather than in Central Asia.”

Moscow, according to analysts, wants the alliance and the U.S. to work through the Collective Security Treaty Organization, a mutual defense alliance comprising Russia, Belarus, Armenia, Kazakhstan, Kyrgyzstan and Uzbekistan.

NATO and the United States, however, have traditionally eschewed direct cooperation with the CSTO to avoid legitimizing Russian influence in Central Asia. They have chosen instead to engage with member states bilaterally.

To that end, the U.S. in 2011 proposed the Central Asia Counternarcotics Initiative to help boost information sharing and to build the capacity of local anti-drug agencies. CACI is providing funding to counternarcotics agencies in some of the Central Asian republics and is supporting a training program run by the NATO-Russia Council.

From the beginning, however, America’s CACI proposals ran into opposition from Russian officials and some independent critics who said it wouldn’t be effective. One reason for Russian opposition may have been Moscow’s desire to minimize U.S. influence in Central Asia.

“The Russian government continues its bifurcated policy toward Afghanistan narcotics trafficking, encouraging NATO to strengthen its anti-drug efforts inside Afghanistan while opposing a greater Western counternarcotics presence in Central Asia, a region Moscow considers as falling within its security sphere of influence,” Weitz said.

Russian Foreign Minister Sergei Lavrov says NATO is allowing politics to prevent closer cooperation with CSTO. He told the Russian TV network RT in October: “My hunch is they are doing this for ideological purposes, not being willing to see the Collective Security Treaty Organization as an equal in this partnership.”

NATO spokeswoman Oana Lungescu confirmed that NATO has no plan to establish new programs directly with the CSTO. It is already cooperating with other member CSTO member countries and is seeking to expand collaboration with Russia, she said.

Whether the two alliances can cooperate effectively or not, two factors that bolster poppy growing and the opium trade — poverty and corruption — seem intractable. Ivanov said the economic and social impetus for drug production hasn’t changed during the NATO security mission. Like NATO, Russia and other members of the CSTO are engaged in interdiction efforts, but Lavrov said it would be more effective “not to fight the symptoms but to fight the root cause” inside Afghanistan.

A weak economy still recovering from decades of war has made poppy and marijuana cultivation an attractive option for many farmers in Afghanistan, and both corrupt officials and insurgent groups are known to have profited from the trade.

Afghan officials, who have long been tasked with countering the drug trade, played down Russian concerns that NATO’s withdrawal will hurt anti-drug campaigns.

“We will continue to have a strong and enduring relationship with NATO with their continued support to the Afghan security forces,” Afghan Interior Ministry spokesman Sediq Sediqqi told Stars and Stripes. “That is why these assumptions will be proved wrong even if there is less presence of NATO Forces in Afghanistan post 2014.”

Even if it is serious about cracking down on the drug trade, Russia may have few options when NATO forces depart Afghanistan, said Stephen Blank, a senior fellow at the American Foreign Policy Council. “Russia has limited influence in Afghanistan for obvious reasons,” he said.

Perhaps the biggest obstacle to ending the opium trade is the fact that Afghanistan and many neighboring countries remain weak states with weak economies.

Vanda Felbab-Brown, a senior fellow at the Brookings Institute, wrote in a recent report that lasting reductions in the illegal drug trade can be achieved only by strengthening countries themselves.

“The more the state is absent or deficient in the provision of legal jobs and public goods … the more communities are susceptible to becoming dependent on and supporters of criminal entities and militant actors who sponsor the drug trade and other illegal economies,” she wrote.

That view was echoed by Blank, who said the demand for drug products remains unabated, and despite recent efforts to reduce corruption, some law enforcement officials in Russia and countries like Tajikistan are often suspected of profiting from and facilitating the flow of narcotics.

“On one side you have a really serious drug problem in Russia,” Blank said. “On the other hand, they have contributed a lot to it.”