As Russia launches missiles into Syria, US faces strategic dilemma 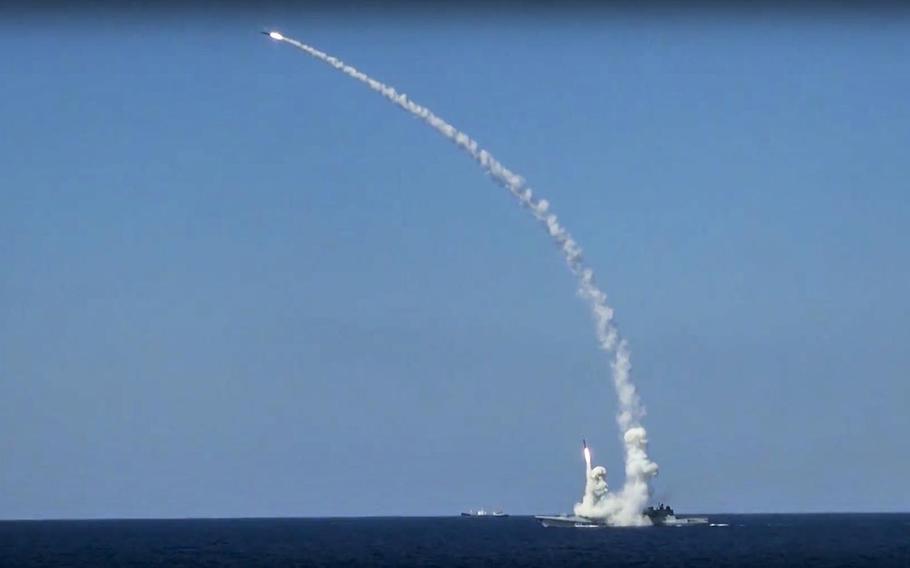 Russia launched a flurry of cruise missiles into Syria Friday, targeting Islamic State fighters with a strike that also demonstrates Moscow’s ability to use its muscle to advance the interests of a Syrian government hostile to U.S.-backed militias.

Six Kalibr missiles were launched from a ship and a submarine in the eastern Mediterranean, hitting ISIS command posts and weapons depots near the town of Akerbat in Hama province, Russia’s military said.

The area has long been a hotbed for Islamic extremists, including ISIS. But Damascus, backed by Russian airpower, has clawed back much of the region from its opponents.

Russia’s high-powered attack comes on the heels of missile strikes by Iran inside Syria, where the U.S. has also intensified its military campaign in recent months as the pace of its air strikes have picked up against ISIS targets.

The ramping up of operations among the three powers has sparked fears that a miscalculation could lead to a larger confrontation. It also has exposed a wobbly U.S. Syria strategy.

While Washington’s long-term aims in Syria are muddled, with apparently no coherent plan for what comes next when ISIS is cleared from its strongholds, Moscow’s aims remain clear: bolster the regime of President Bashar Assad.

The downing of a Syrian warplane by a U.S. Navy fighter on Sunday showed the coalition is ready to protect is proxy forces from potential attack while they are leading the fight against ISIS. But Washington will eventually be forced to decide how far it is willing to go to protect the so-called Syrian Defense Forces, whose dominant Kurdish elements are seeking to carve out an autonomous region. As ISIS falls back, Russian-backed Syrian regime forces will likely push east, coming into conflict with U.S. proxies dependent on American airpower for survival, analysts say.

“The U.S. must decide how much of east Syria it wants to protect for its proxies,” said Joshua Landis, a Syria expert at the University of Oklahoma. “The U.S. will be stuck defending its new territory for some time because the Kurds do not have an air force and cannot hope to defend their burgeoning state against the Syrian government and its allies without American muscle.”

The U.S. faces the prospect of having to choose whether it will continue to defend its Kurdish proxies in places where the Islamic State no longer holds ground, thereby extending the scope of its mission beyond just the elimination of ISIS and risking confrontation with Moscow.

The U.S. dilemma will likely come into focus in the months ahead as the U.S.-led coalition wages an offensive against the town of Raqqa, the terrorist group’s self-declared capital.

Any U.S. effort to shield its Kurdish partners from outside attack and enable a safe zone would face resistance not only from Russia, but also Iran and even NATO ally Turkey, which fears any establishment of an autonomous Kurdish zone in Syria.

In a post-ISIS Syria, Russia’s objective is likely to remain fixed. Bolster the Assad government, its longtime ally, and maintain a foothold in Syria. Yet the U.S. has given little consideration to what its role should be as ISIS loses ground, analysts say.

“And while planners may have thought that they could address these problems sequentially, by first taking Raqqa and then dealing with the post-Raqqa politics of Syria, Washington’s opponents are forcing the US to decide to what extent it is going to oppose Syrian regime and allied forces when they try to re-establish government control over areas cleared of Islamic State,” wrote Roger Shanahan, a Syria analyst with the Lowy Institute for International Policy.

Outside of its war on ISIS, Washington has largely been sidelined in Syria. During the Obama administration, the policy was that Assad must go, but as the war dragged on and Russia seized control of events, Washington’s demands carried little weight.

President Donald Trump’s views on Syria’s Assad have wavered, shifting from tolerance and potential partner to ordering airstrikes against regime targets in April after Damascus was accused of using chemical weapons. Trump, meanwhile, also has spoken of possible safe zones in Syria for refugees. But the administration hasn’t staked out a clear policy or explained how far it will go to guard its Kurdish fighters.

Iran and Russia’s lobbing of missiles in Syria could be a reminder that any imposition of a no-fly zone over territory controlled by the Syrian Defense Forces would carry risks.

“No rational strategic planner would countenance supporting the de facto partition of parts of Syria that rely on US military support for their survival,” wrote Shanahan. “Policy made on the run is rarely coherent or good policy, but that looks like what Washington is being forced to do in Syria.”