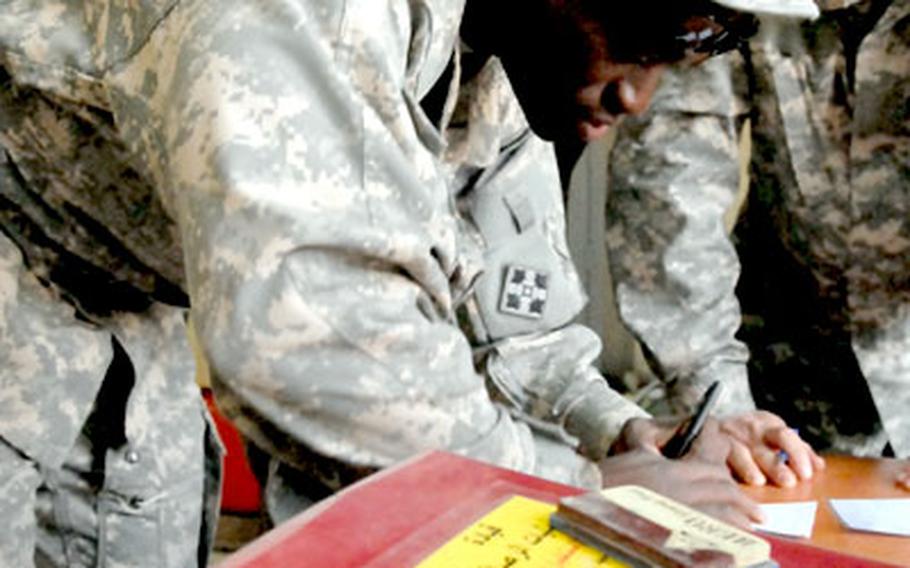 Maj. Dex Davis, an operations adviser who also works with the Iraqi chief investigator for eastern Baghdad, talks with Iraqi intelligence soldiers Saturday with the help of an interpreter at the old Ministry of Defense compound in Baghdad. Advisers who once spent most of their time on combat operations are focusing more and more on helping the Americans adapt to the new way of obtaining warrants. (James Warden / s&s)

BAGHDAD &#8212; On a recent Friday afternoon in Iraq, Maj. Rich Ramsey fiddles with a computer in a utilitarian second-story room on the grounds of the old Iraqi Ministry of Defense compound.

Ramsey is the officer in charge of his brigade&#8217;s prosecution task force &#8212; a four-man team dedicated to getting a handle on the Iraqi warrant process. In a few minutes, he&#8217;s going to update the brigade commander, battalion commanders and other senior officers on the brigade&#8217;s readiness for obtaining warrants to detain suspected insurgents. The meeting is occurring over the Internet, but it&#8217;s clear nonetheless that all eyes are on him.

The looming requirement for U.S. forces to obtain warrants may be a relatively minor course correction for line units, but higher level units are working day and night to ensure everyone is ready when the security agreement between Iraq and the United States takes effect Thursday.

Division and brigade prosecution task forces such as Ramsey&#8217;s are the nexus for this transition. The teams are dedicated to tracking warrants through the Byzantine Iraqi bureaucratic process. These teams will likely be fixtures of American brigades well after the security agreement takes effect.

"It was basically a crash course on the criminal system," Wiggins said.

The differences from the American process are real. Eyewitness accounts are more valuable than forensic evidence. The judge conducts a mini-hearing before issuing a warrant. Turn-around time is longer.

"I&#8217;ve gained an incredible respect for the process of civil law in Iraq," Ramsey said. "The Iraqis are ready for civil law. They want civil law."

Most warrants are issued by local investigative judges, so the Americans next started getting to know them. While the team did learn each judge&#8217;s individual legal interpretations, this ultimately proved to be a false start.

Nearly all the judges said they would prefer to work through Iraqi authorities.

This led the Americans to the Iraqi army&#8217;s warrant process. The Iraqi army formerly could detain people without warrants, said Maj. Dex Davis, an operations adviser who also works with the chief investigator for eastern Baghdad. But that army has been obtaining warrants since February 2007 &#8212; and has put a particular emphasis on warrants in the past six months.

In that time, the Iraqis have developed a warrant-request process where multiple people must attach their memorandum to the packet before the chief investigator asks the investigating judge for a warrant. After the warrant is issued, the packet creeps its way back down the same chain. A spidery hand-drawn chart on an easel in the 3/4 prosecution team&#8217;s office illustrates the maze that warrant requests must travel before they are approved.

Leaders say the process is still too new to determine the average time it takes to get a warrant, but most say approval takes at least four days. An Iraqi judge may even want to talk to some people before approving the warrant. "There is no midnight call to the judge," Wiggins said.

The prosecution task force is submitting warrant requests for as many targets as possible so that they can detain the suspects once the security agreement takes effect. Many of those warrants are for suspects whose whereabouts are still unknown. Because they are submitting packets faster than they are finding new suspects, the heavy workload should slow eventually.

"We just reviewed our most-wanted guys and all the battalions&#8217; most-wanted guys," said Lt. Col. Mike Pemrick, the 3/4 deputy commander. "I would think that we would have warrants on the great majority of them by Jan. 1."

The team has gotten a good handle on the warrant process in the past month, but their work is far from over. They are monitoring each and every warrant request to ensure it&#8217;s moving toward approval. Ramsey keeps tabs on all suspects and the status of their warrant packets &#8212; where they&#8217;re at and what&#8217;s preventing them from getting approved.

Meanwhile, lawyers on the team are researching the few remaining legal questions: Do you need warrants for a cordon and search operation? What about traffic checkpoints?

As people came online for Ramsey&#8217;s afternoon meeting, he keyed the microphone and started to speak &#8212; for the moment, the center of the brigade&#8217;s attention.

Starting Thursday, American units in Iraq will be required to obtain a warrant for nearly everyone they detain. Their actions must follow terms set by the security agreement signed between the two countries. In a three-day series, Stars and Stripes examines how the military is preparing for this change.

Day One: Prosecution task forces&#8226; As New Year&#8217;s Day nears, U.S. troops prepare to hand over arrest authority to local judges&#8226; Soldiers learning the ropes of the Iraqi legal system, but some uncertainty over process remainsDay two: The Troops &#8226; &#8216;CSI: Baghdad&#8217; it isn&#8217;t: High-tech gear not a lot of help in getting Iraqi warrantsDay three: The Iraqis&#8226; Iraqis taking a larger role in securing warrants