As Mosul offensive nears final stages, what comes next may be more complex 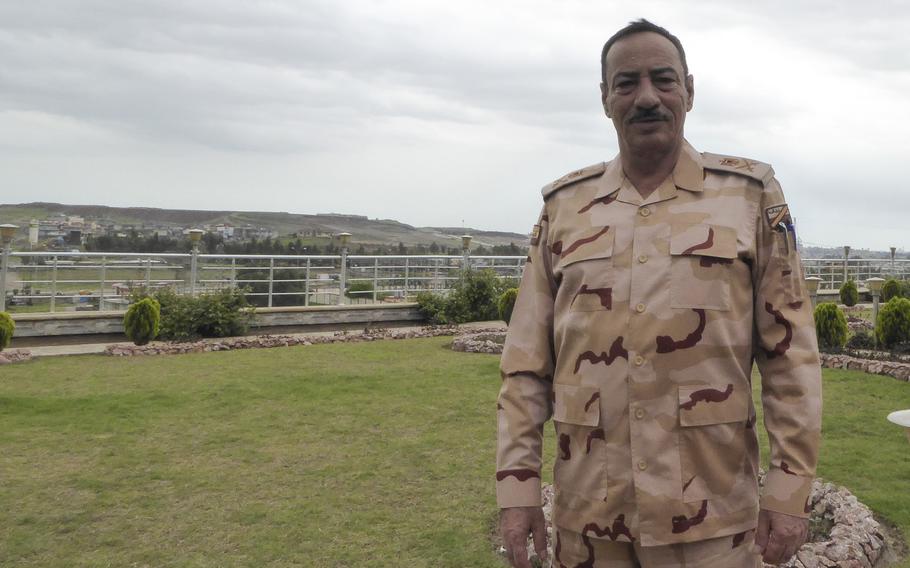 Buy Photo
Maj. Gen. Najm al-Jabouri in the garden outside a hilltop mansion that he was using as a command post in eastern Mosul, Iraq, on April 14, 2017. Al-Jabouri said the fight against the Islamic State is personal since his cousins were killed in a graphic propaganda video in June 2015. (Chad Garland/Stars and Stripes)

Buy Photo
Maj. Gen. Najm al-Jabouri in the garden outside a hilltop mansion that he was using as a command post in eastern Mosul, Iraq, on April 14, 2017. Al-Jabouri said the fight against the Islamic State is personal since his cousins were killed in a graphic propaganda video in June 2015. (Chad Garland/Stars and Stripes) 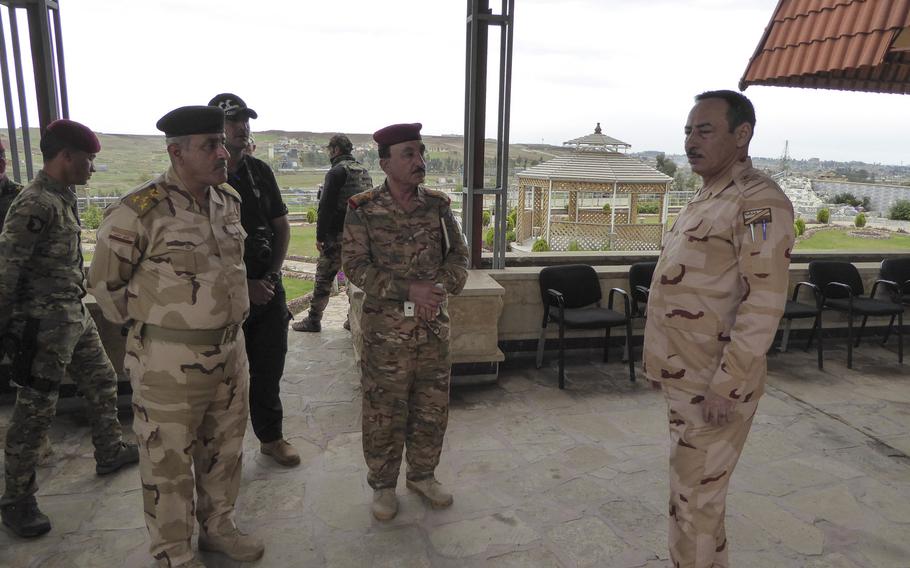 Buy Photo
Maj. Gen. Najm al-Jabouri with his staff outside a mansion in eastern Mosul on April 14, 2017. The officers were using the mansion as a command post. Al-Jabouri is a top commander of the offensive to retake the Iraqi city from the Islamic State. (Chad Garland/Stars and Stripes) 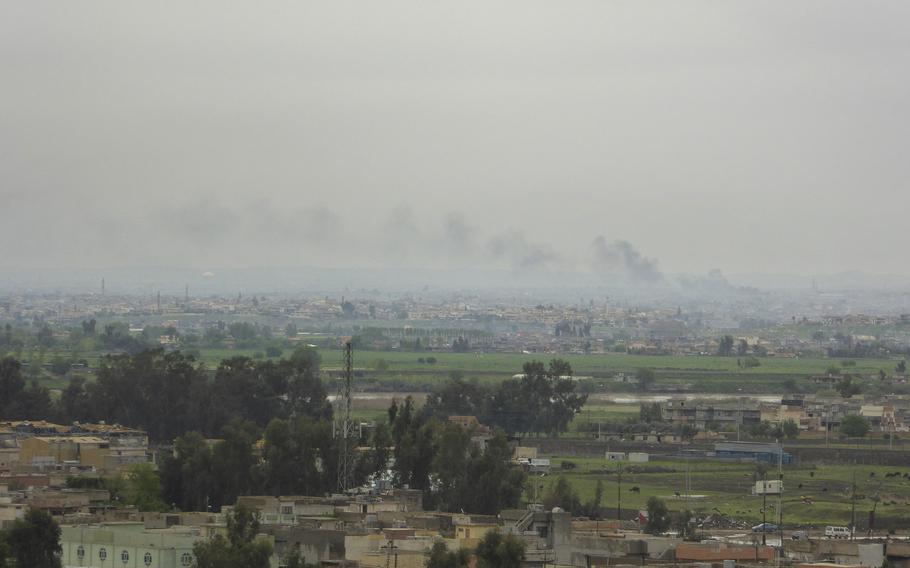 Buy Photo
Smoke rises over Mosul, Iraq, April 14, 2017. Iraqi forces are bearing down on Islamic State militants in the western half of the city, and Iraqi officials are hopeful the battle will be over in a matter of weeks after more than six months of fighting to retake Iraq's second largest city. (Chad Garland/Stars and Stripes) 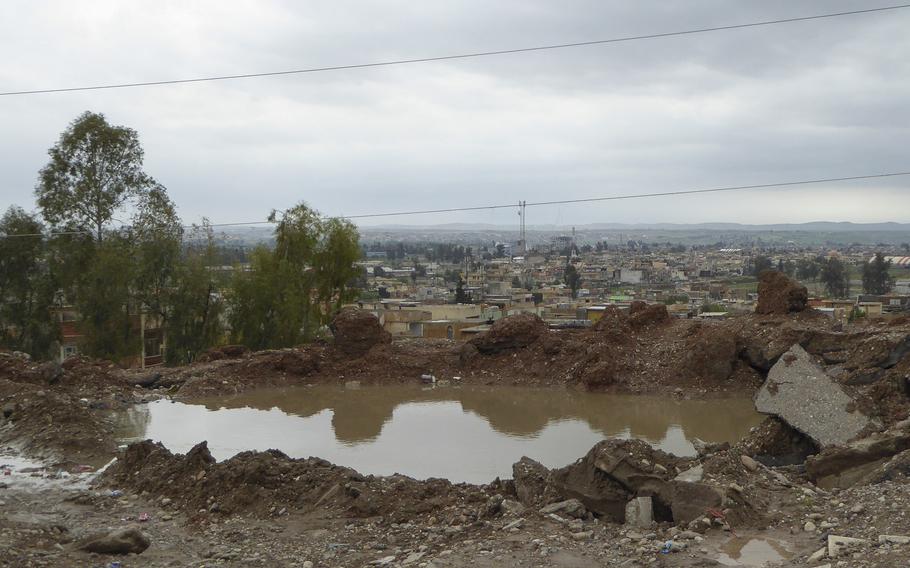 Buy Photo
A bomb crater in eastern Mosul is pictured on April 14, 2017. When Islamic State militants have finally been routed from the Iraqi city, the challenging process of rebuilding and reconciling the people will take great effort, officials and observers have said. (Chad Garland/Stars and Stripes) 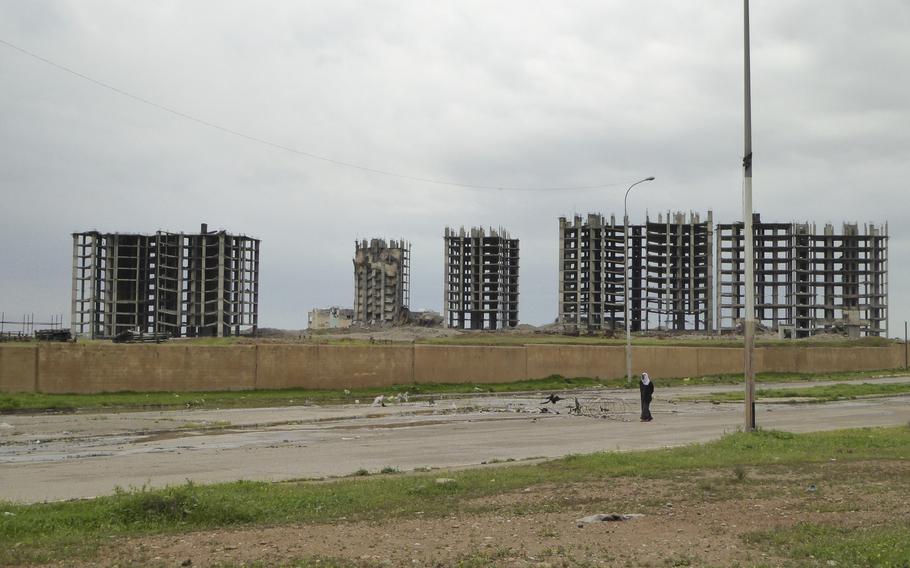 Buy Photo
An Iraqi woman walks past the skeletons of high-rise buildings in eastern Mosul, April 14, 2017. Officials say they are close to routing Islamic State militants from the city's western half, but the challenge of rebuilding and reconciliation in Mosul will take much longer. (Chad Garland/Stars and Stripes) 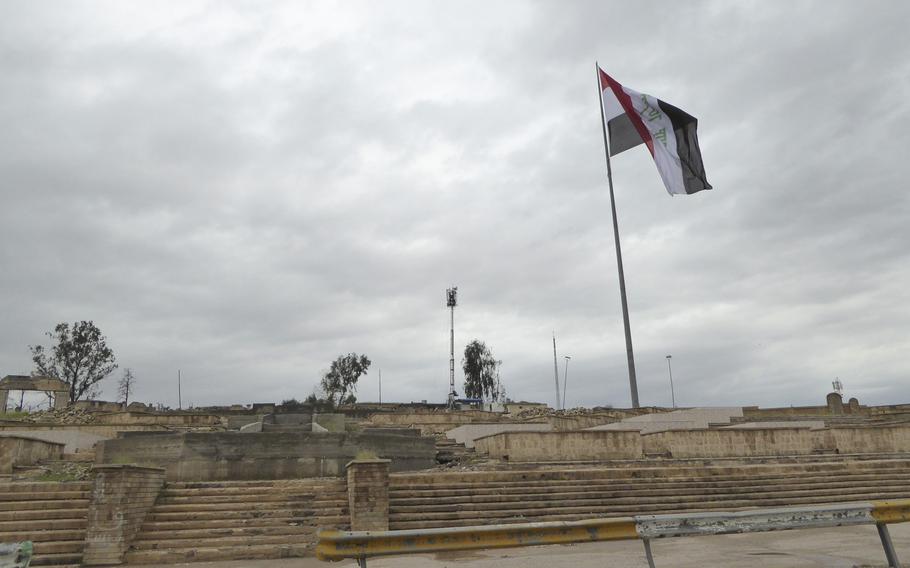 Buy Photo
An Iraqi flag flies over a park in eastern Mosul, April 14, 2017. The area was declared liberated of Islamic State militants in late January. Efforts to free the western half of the city, which is bisected by the Tigris River, are continuing as the offensive to retake Iraq's second-largest city stretches past the six-month mark. (Chad Garland/Stars and Stripes)

MOSUL, Iraq — As the six-month offensive to retake Mosul enters its final stages, the challenge ahead will be reconciliation and reconstruction, a top commander said as government forces bear down on Islamic State militants in Iraq’s second-largest city.

“The picture in the near future after liberating Mosul [is] not very nice,” Maj. Gen. Najm al-Jabouri said last week. “We need a lot of effort to repair what ISIS destroyed.”

His own example — as a man hardened by a desire for revenge and as a civic leader with experience mending the wounds of an insurgency — highlights both the complexity of that next phase and a potential way ahead.

Al-Jabouri, who returned to Iraq in 2015 from the United States to help lead the counter-ISIS fight at the behest of Prime Minister Haider al-Abadi, is eager to avenge the blood of his people, who’ve been terrorized since the jihadis swept through Mosul and other parts of northern Iraq in 2014.

He knows very well the horrors ISIS can commit after the terrorist group brutally executed his relatives nearly two years ago. In a propaganda video released in June 2015, five men were shown drowning inside a cage the militants submerged in a pool, and seven others were beheaded by explosives fuse cords fashioned into necklaces. Al-Jabouri said these men were all his cousins.

“They killed for any reason,” he said, whether because they coveted a man’s wife or property, to send a message to the victims’ relatives or for no reason at all. “These people are like Dracula; (they) just want to drink blood.”

Such inhumanity is increasingly apparent on the battlefield, where the militants have reportedly hanged from utility poles the dead bodies of civilians attempting to flee. They’re using human shields, embedding armed fighters among fleeing residents, and firing on escaping women and children to draw Iraqi forces into the open in rescue attempts, al-Jabouri said, all part of a last-ditch effort to hold the city.

“This is the end of them,” he said over tea in the living room of a hilltop mansion he was using as a command post in eastern Mosul. “They want to use anything to ... stop the operation.”

While ISIS’ stunning use of civilians has slowed the advance, al-Jabouri’s subordinate commanders are optimistic that they will soon defeat their enemies.

Elite Iraqi Counter-Terrorism Forces are working to encircle the densely packed Old City, and federal police units are inching closer to the Grand Mosque, also known as the Nuri Mosque, a symbolically significant landmark for ISIS. As the militants focus their defenses on the southern sector, the Iraqi army’s 9th Armored Division, which has closed off the militants’ escape routes to Syria, is pushing into the city from the north.

Once Mosul is freed, al-Jabouri said, the anti-ISIS fight will go much faster in less populated areas. But he said he doesn’t just want to drive the militants out of Iraq — ever since his cousins were killed, he’s wanted to kill them all.

It’s that kind of sentiment that presents a challenge for restoring order and justice in and around Mosul after the fighting is over. The Sunni extremists “destroyed all the fabric” holding together northern Iraq’s diverse communities, al-Jabouri said.

That may bring unequaled thirst for vengeance from groups like the Yazidis, who have seen the militants slaughter their men and turn their women and girls into sex slaves, or the Christians, who have seen their homes and communities destroyed. Both groups accuse Sunni Arab civilians in Mosul and its outlying areas of aiding the militants.

In Batnaya, a Christian village north of Mosul taken by ISIS in 2014, which has since been largely leveled, 74-year-old Salim Petrus Jeju was taken by the militants and threatened with beheading if he did not convert to Islam, Jeju said.

“I wish (for the U.S.-led coalition) to kill all the Muslims in Mosul. They’re all ISIS,” he said, speaking through a translator. Then, in English, he added with a hand drawn across his neck: “Whoom! All.”

Sectarian and ethnic animosity isn’t new in Iraq, which has struggled to find a recipe for stability since the U.S.-led invasion in 2003 toppled Saddam Hussein’s secular Baathist regime.

But al-Jabouri believes his experience helping American forces counter ISIS’s predecessor al-Qaida in Iraq more than a decade ago in Tal Afar, west of Mosul, suggests a formula for Mosul’s next steps. As a police chief and later as mayor from 2005-08, he worked with officers who included Lt. Gen. H.R. McMaster, then a colonel and now the top national security adviser to President Donald Trump.

After clearing and holding the city, the focus should shift to giving people jobs, promoting reconciliation among the various groups and deprogramming children brainwashed by three years of ISIS indoctrination, al-Jabouri said.

Another key is to ensure a solid foundation of trust between the security forces and Mosul’s people so the hostilities that helped ISIS establish itself in Iraq don’t re-emerge, he said. Mosul residents had welcomed ISIS, some fleeing civilians have said, wrongly thinking they would treat them better than Iraq’s largely Shiite government.

But, if Tal Afar is any example, it may be only a matter of time before sectarian violence returns. Bombings and other attacks had become commonplace before al-Jabouri left for the U.S. in 2008 and well before ISIS took the city in 2014.