As Mosul campaign continues, Q West to ‘get bigger, but it won’t get nicer’ 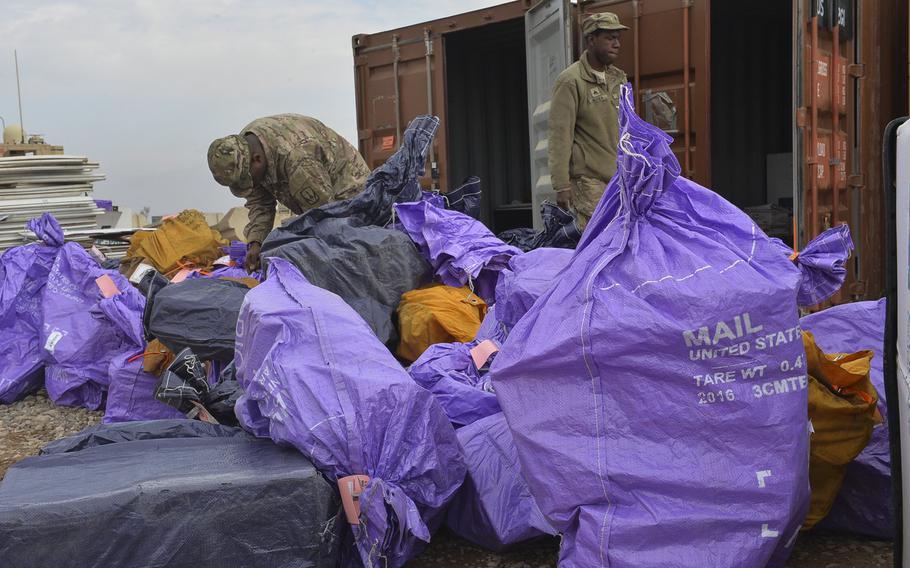 Buy Photo
Sgt. Alvin Bethea Jr. walks past a pile of mailbags being sorted on Qayara Airfield West, March 17, 2017. Bethea, a soldier with the 678th Adjutant General Company Postal Platoon, said mail arrives about once every two weeks. Soldiers at the logistics hub about 40 miles south of Mosul say mail, especially care packages, is one of the few morale boosters here. (Chad Garland/Stars and Stripes)

Buy Photo
Sgt. Alvin Bethea Jr. walks past a pile of mailbags being sorted on Qayara Airfield West, March 17, 2017. Bethea, a soldier with the 678th Adjutant General Company Postal Platoon, said mail arrives about once every two weeks. Soldiers at the logistics hub about 40 miles south of Mosul say mail, especially care packages, is one of the few morale boosters here. (Chad Garland/Stars and Stripes) 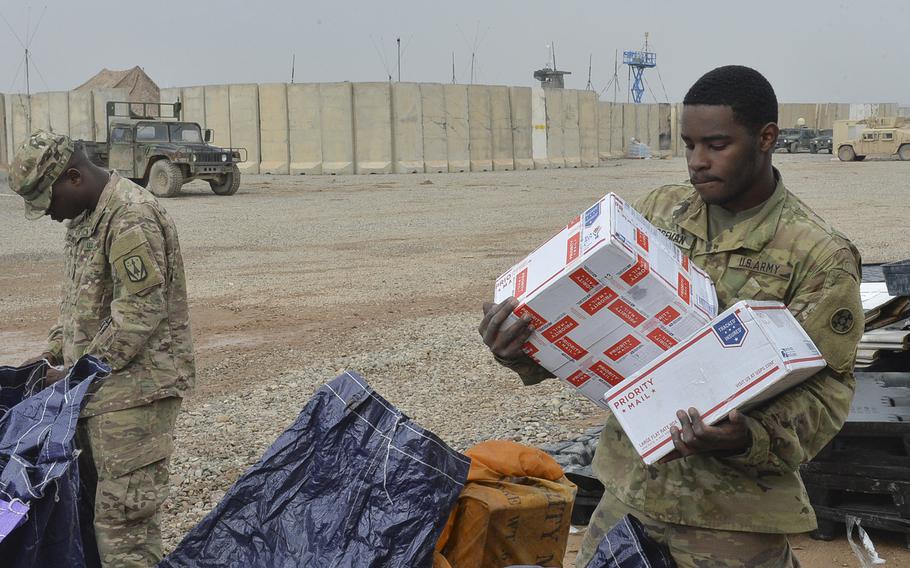 Buy Photo
Spc. Telvin Boseman, 22, of Charlotte, N.C., sorts care packages from a mail delivery at Qayara Airfield West, Iraq, March 17, 2017. Mail is one of the few morale boosters on base here, about 40 miles south of Mosul, where troops are supporting an ongoing campaign to oust Islamic State militants from Mosul. (Chad Garland/Stars and Stripes) 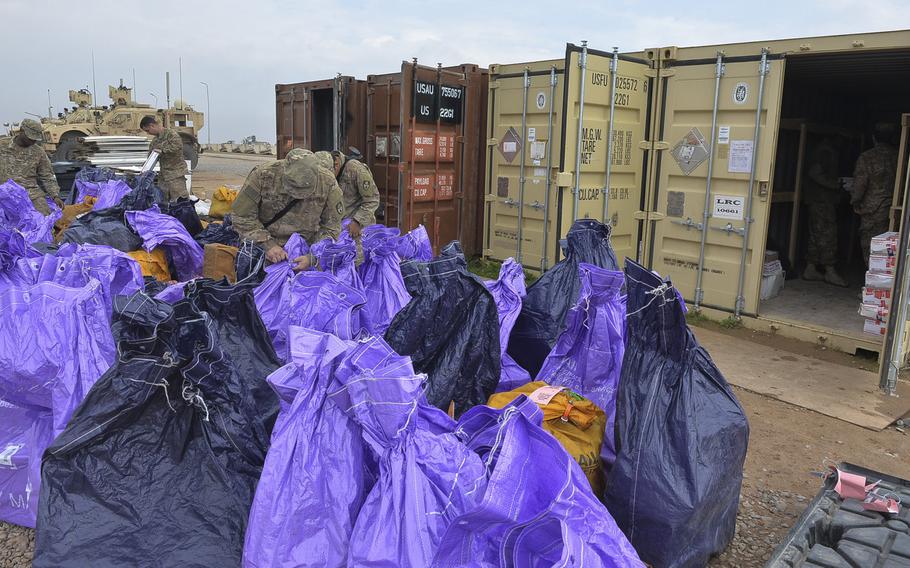 Buy Photo
Soldiers of the 678th Adjutant General Company Postal Platoon sort mail at Qayara Airfield West, Iraq, March 17, 2017. Troops say any care package from home is a good one, and they often receive them from strangers through groups such as ''Adopt a Platoon.'' Mail arrives here about once every two weeks. (Chad Garland/Stars and Stripes) Buy Photo
A soldier walks past stacks of care packages in a shipping container at Qayara Airfield West, Iraq, on March 17, 2017. Some of the packages, shipped through the nonprofit ''Adopt a Platoon,'' are sent by strangers in support of deployed troops who say they appreciate the small treats from home. (Chad Garland/Stars and Stripes) Buy Photo
Rain turns the powdery dirt of Qayara Airfield West, Iraq, into a muddy sludge, which bogged down a bus full of reporters on the base, March 17, 2017. Pictured here on that day, Lt. Col. Sebastian Pastor, the base commander, helps instruct a bus driver in how to get out of the mire. (Chad Garland/Stars and Stripes) Buy Photo
Capt. Anne Nagy, battalion planner with the 37th Brigade Engineer Battalion of the 82nd Airborne Division's 2nd Brigade Combat Team, is pictured here, March 17, 2017, on Qayara Airfield West. Nagy, whose job is to plan the ongoing build-out of the base, said her job is like the city-building computer game ''SimCity.'' (Chad Garland/Stars and Stripes) 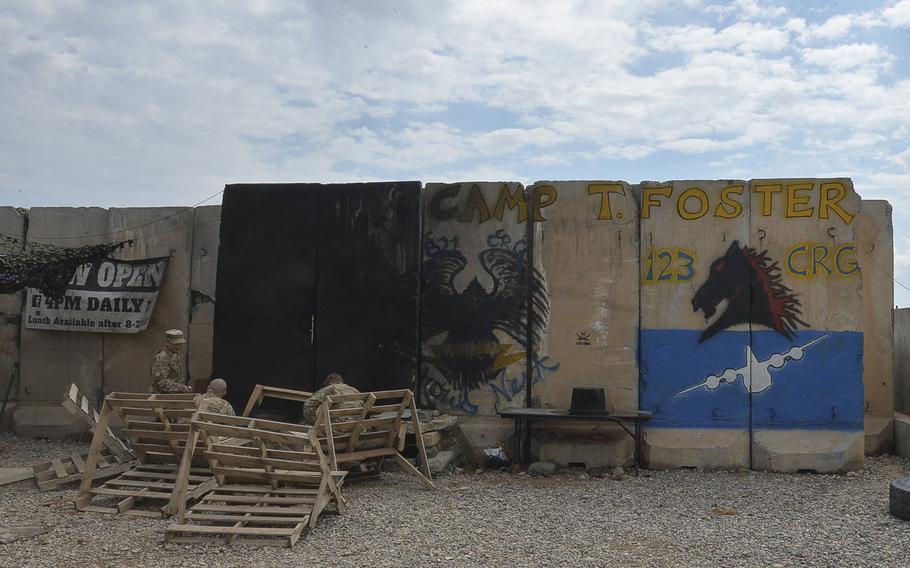 Buy Photo
Airmen of the 370th Air Expeditionary Advisory Group detachment gather around a firepit on makeshift pallet furniture, March 17, 2017. The conditions are austere at the base, but units make do with what they have, officials said. (Chad Garland/Stars and Stripes) 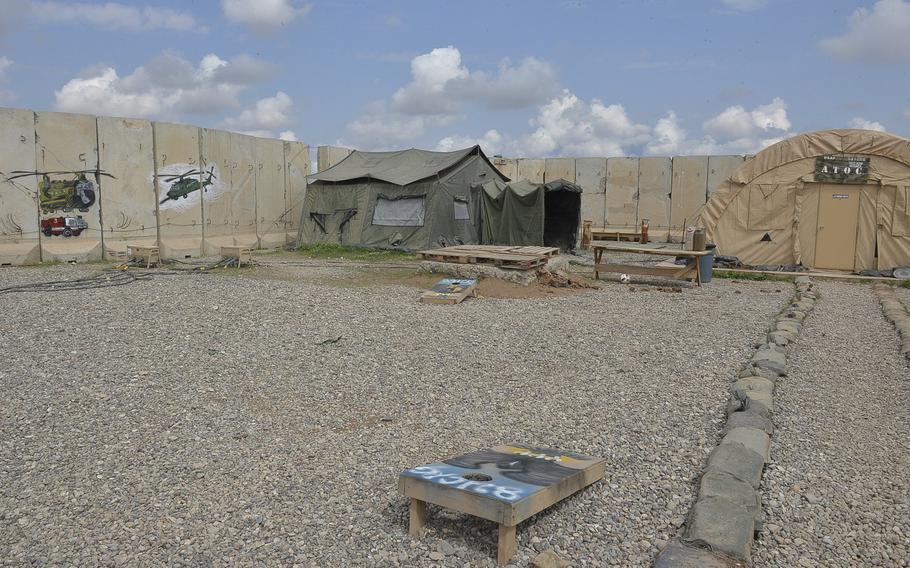 Buy Photo
Pictured here are cornhole boards in a gravel lot in an area where arimen of the 370th Air Expeditionary Advisory Group detachment work on Qayara Airfield West, Iraq. As the base is being built up, planners struggle to balance the investment into the installation with the need to avoid ''frivolous'' niceities on a base destined to be returned to the Iraqi government. (Chad Garland/Stars and Stripes) 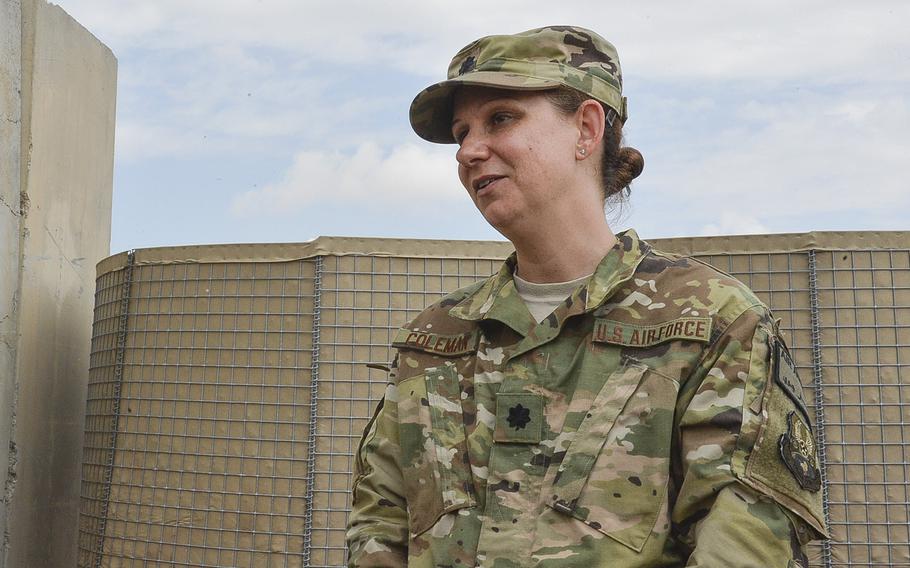 QAYARA WEST AIRFIELD, Iraq — This logistics hub about 40 miles south of Mosul, rebuilt over the past seven months after being retaken from Islamic State militants, houses roughly double the 560 troops it was intended to accommodate.

As the open-ended anti-Islamic State campaign continues, the base known as Key West or Q-West could see triple that number of personnel, U.S. officials here said last week. The hundreds of troops and equipment sent from here to forward locations near Mosul will eventually return.

As troops at this key base settle in for a long haul, however, its planners struggle to provide needed amenities and improvements for the larger numbers while avoiding too much of a build-up at an installation that will ultimately be handed over to the Iraqis.

“It can get bigger, but it won’t get nicer,” said Capt. Anne Nagy, planner for the 37th Brigade Engineer Battalion of the 82nd Airborne Division’s 2nd Brigade Combat Team. Referring to the classic city-building computer game, Nagy described her job as “’SimCity,’ but for this [base’s] entire footprint.”

That base is now about 2.5 miles long by 650 yards wide — a lot of space, but not all of it livable, Nagy said. Inside a perimeter of concrete walls, engineers continue to clear giant piles of debris left from when militants leveled the base after seizing it from the Iraqis in 2014. Americans had turned it over after using it during Operation Iraqi Freedom.

The militants placed explosives in the four corners of buildings, causing blasts that collapsed the structures, Nagy said. They took jackhammers to the airstrip and dragged concrete wall sections until they broke into pieces.

Army engineers began rebuilding last fall, clearing away much of the debris and building up the enclaves of tent clusters, many surrounded by concrete blast walls. Troops live and work along a network of roads with names like Airlift Alley and Beast Avenue. The airstrip was repaired and is now used by U.S. and Iraqi military transports.

The intermediate staging base, home to about 1,000 troops, is the biggest of its kind, Pastor said. Its primary mission is to supply food, fuel and ammunition to the roughly 1,700 coalition troops in northern Iraq, and to equip the Iraqis.

There’s not a lot to do here besides work, but the troops say keeping busy with 12- to 14-hour days helps pass the time.

One of the few morale boosts is mail from home, which comes about once every two weeks. Earlier this month, troops were sorting a mail delivery, including dozens of care packages, some from strangers back home. If the mail doesn’t come, it’s been bumped for something operationally necessary, such as rockets for the base’s artillery battery, which has fired hundreds of them since its arrival.

A detachment of Apache attack helicopters has clocked hundreds of engagements supporting the Iraqi forces in Mosul and escorting Back Hawks. The Black Hawks based here have flown more than 60 medical evacuation missions to bring coalition and Iraqi casualties the Navy-run hospital here.

Hundreds of troops this base supports are at forward locations closer to Mosul, where they’ve been advising Iraqis or supporting them with precision strikes.

There’s no timetable for the Mosul operation, which has already lasted five months, a U.S. official said. It’s not clear where the fight will go once the city is fully liberated, but U.S. troops will support the Iraqis wherever that is.

“We’re going to support the Iraqi plan. We won’t put a timeline on it,” coalition spokesman Lt. Col. Joey Sullinger told reporters Tuesday in eastern Mosul. Using an Arabic acronym for the jihadi group, he went on: “We’re going to ... remain partnered with them, and we will go where the Iraqis go as we annihilate Daesh in Iraq.”

Where the Iraqis take on the militants after Mosul matters for the planning here, because if it’s too far away from Q-West, the base might not be needed and could be returned to the Iraqis.

“It’s only significant so long as we’re conducting operations in this area in Iraq,” Nagy said.

For now, she’s focused on improvements for U.S. troops that won’t be considered “frivolous.” A laundry opened in February. There’s a gym, but it needs rebuilding after recent heavy rains washed away the ground under it.

Nagy’s also pushing for a new dining facility. The base has outgrown its current facility, a containerized kitchen meant to serve about 200 troops in the short term.

And before the U.S. troops leave, whenever that may be, they’re building two logistics-support areas with clusters of tents for Iraqi army and air force units, Nagy said. “They’re trying to build up their capacity.”

Some units here have made improvements to their own clusters of tents with makeshift furniture and recreation facilities, including their own gyms.

“Folks have dug in and made it the best they can,” said Lt. Col. Carrie Coleman, the 370th Air Expeditionary Advisory Group detachment commander, who called it “home away from home.”

The detachment, made up of air traffic controllers, weather specialists, cargo handlers and others, recently replaced the 123rd Contingency Response Group and will serve as a more permanent presence here for the next six months, Coleman said. The unit handles two or three flights a day, typically at night for security reasons, and trains the Iraqis in how to run the airfield.

“Our mission here is to keep the logistics moving, bringing in cargo and passengers,” she said. “Our goal is to get the Iraqis on their feet as soon as we can.”