As Misawa responds to Iraq call, young couples are coping with separation 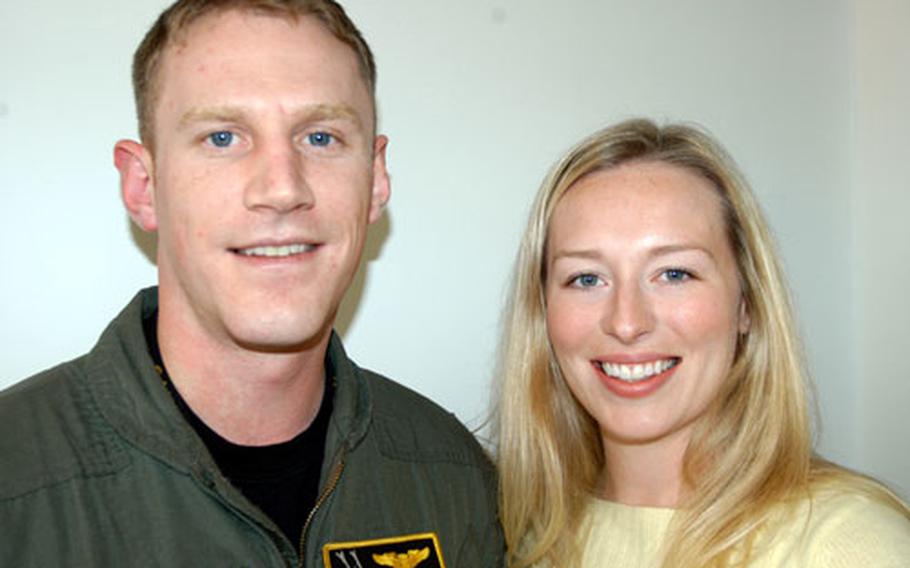 MISAWA AIR BASE, Japan &#8212; The reality of sacrifice and separation sank in when Noel Pearson saw her husband dressed in sandbox tan.

&#8220;It just really hit home when he put on his uniform this morning,&#8221; Noel said, before bidding her husband a tearful farewell.

As the U.S. military steps up the fight in Iraq, Misawa is sending more than 400 airmen to the front lines for four months. Three young couples are among the many Misawa families who will be separated due to war. While one spouse experiences life downrange for the first time, the other will pilot solo through paying bills, working, spending time with friends and family in the States &#8212; anything to keep loneliness and worry at bay.

The Pearsons, both 27, will have been married three years on Feb. 28. They&#8217;ve never spent an anniversary together. They met as juniors at the Air Force Academy and lived apart while Noel worked for the Air Force in Washington, D.C., and Patrick completed F-16 pilot training in Arizona. They moved to Misawa in March 2005 and since have weathered numerous temporary-duty (TDY) assignments, with Patrick shuttling off to Las Vegas or elsewhere for training.

But this separation is different.

But Patrick and Noel said they&#8217;re not complaining.

To kill time while Patrick&#8217;s gone, Noel will visit her family in the States for a month. She&#8217;ll also spend time with other spouses from the squadron. They&#8217;ve started weekly lunches and will hit the ski slopes a few times.

Noel said she takes comfort in knowing that Patrick is highly skilled and trained and in her belief that the 14th Fighter Squadron&#8217;s mission in Iraq is honorable.

Making sure Patrick and the other fighter pilots are equipped for the fight will be Senior Airman Nathaniel Newkirk and the other life support technicians deploying in support of the fighter squadron.

The couple met at Misawa. Amber graduated from high school here, after moving to Misawa in fifth grade while her dad was in the Air Force.

Drawing on the memory of her previous military life should help her cope with this deployment, she said. &#8220;Just remembering how my mom dealt with it when my dad would go to Bosnia or what not,&#8221; she said. &#8220;It&#8217;s just basically keeping yourself busy. Counting down the days is kind of rough because it seems the days go even slower.&#8221;

Amber will fill her time while Nathaniel&#8217;s gone with her full-time job as a child development program assistant and looking after the couple&#8217;s pet dog.

Like Noel Pearson, Amber plans to visit her family for a month in Grove City, Pa.

A jaunt back to the States isn&#8217;t an option for Airman 1st Class Michael Mayo. While his wife, Airman 1st Class Jennifer Mayo, deploys to Iraq, Michael, an avionics specialist with the 35th Aircraft Maintenance Squadron, will be working on the F-16s left behind at Misawa. Jennifer does the exact same job.

The two thought they would be facing an eight-month separation, figuring Michael would have to deploy to Iraq in May with the 13th Fighter Squadron. But Michael has been tagged as an alternate to deploy and might not have to go, they said.

Jennifer is counting on Michael to be her support system on her first deployment. &#8220;I just told him to keep writing, keep the e-mails going,&#8221; she said.

The two met in basic training and have been married for two years. They knew when they signed the dotted line that going to war was a very real possibility. Michael, in fact, said he was eager to deploy until he got married.

Jennifer said she worries about &#8220;the threats around us&#8221; in Iraq but is trying to be strong. The best advice she&#8217;s been given comes from a former senior master sergeant in her squadron with experience downrange. &#8220;He told us to be aware and know your surroundings.&#8221;