As injuries increase out of Afghanistan, WTUs adjust entry criteria 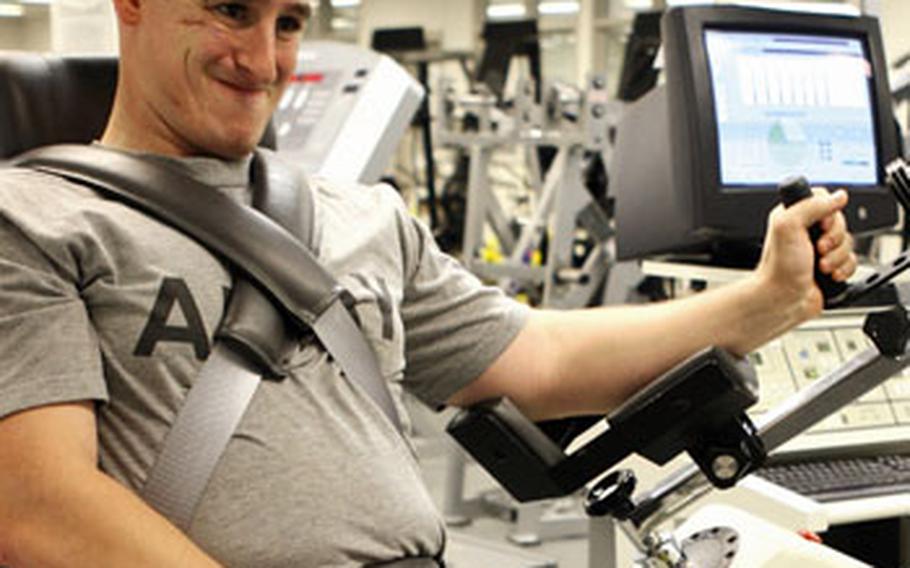 First Lt. Robert Burke works to build strength in his shoulder during a physical therapy session in 2008 at the Arvin Cadet Physical Development Center at The United States Military Academy at West Point, N.Y. The Army has seen a steep drop in the number of soldiers assigned to WTUs because of tighter restrictions on who should be sent to the units. (Courtesy of the U.S. Army)

VILSECK, Germany &#8212; Army warrior transition units have seen a small surge in the number of patients coming from Afghanistan in recent months, but overall the number of soldiers being sent to the specialized care units has dramatically dropped in the last year because of tighter restrictions on admitting troops.

Overall, the number of soldiers in the units increased to 8,883 in October from 8,771 in July, coinciding with an increase in violence in Afghanistan. Since August, 159 U.S. troops have died in fighting in Afghanistan, according to iCasualties.org. In the first seven months of this year, 131 soldiers died.

But the current number of soldiers in the 34 WTUs throughout the United States and Europe is considerably lower than in years past, said Lt. Col. Thomas Axtman, commander of the Army&#8217;s Warrior Transition Battalion in Europe. At the high point, there were up to 15,000 soldiers in WTUs worldwide, he said.

The biggest reason for the overall drop is tighter restrictions on who should be admitted to the units, Axtman said.

"Initially, any soldier with any sort of medical situation or condition that made them nondeployable would be sent to the WTU," he said. "Rather than every soldier who has a banged knee or scraped elbow, we narrowed [WTU entry] to those soldiers who require professional case management in order to heal."

The WTU program was created in 2007 to help soldiers navigate the medical system and to monitor their progress and treatment following revelations of substandard care of wounded troops at Walter Reed Army Medical Center. It has evolved to focus on soldiers with complex care issues, those who require the care of multiple health care professionals, Axtman said.

Each unit has a primary care manager, a physician who is responsible for the soldier&#8217;s medical care and rehabilitation. There are also several nurse case managers who help soldiers manage their medical appointments, occupational therapists who oversee soldiers&#8217; physical rehabilitation and social workers who help with family and behavioral health issues.

In addition to the tighter entry restrictions, there are fewer casualties coming out of Iraq, Axtman said.

"Afghanistan continues to go on, but the fight in Afghanistan is neither the same nor of the same magnitude as Iraq," he said.

But in the end, Axtman said, it doesn&#8217;t really matter where the soldiers come from.

"I have soldiers who have never deployed but were injured training with their units and require case management on a large scale," he said. "On average, [only] 15 to 20 percent of [soldiers assigned to WTUs] have a deployment-related injury or illness," he said.

Typically, there are two times when soldiers are sent to WTUs for physical ailments &#8212; right before a deployment or right after.

"We have several brigade-sized units entering the deployment window in Europe," Axtman said. "I have already been engaged by the leaders in those units about getting soldiers transferred to us before they deploy."

Out of loyalty, commanders usually hold onto wounded soldiers who should have been transferred to WTUs, he said.

But when the unit receives orders to head downrange, commanders come to the realization that these soldiers aren&#8217;t going to heal in time for the deployment.

"I expect them to submit packets (to transfer the soldiers to WTUs) that they should have submitted six months ago," Axtman said.

On the other end of the spectrum, soldiers with physical problems show up at the WTUs right away when a unit returns from deployment, said Capt. David Matheson, the Vilseck unit commander.

But then, about six months after units return from downrange, "we start getting soldiers with behavioral issues," he said.

Soldiers from the Vilseck-based 2nd Stryker Cavalry Regiment started coming to the WTU with behavioral problems, such as post-traumatic stress disorder, he said.

"It&#8217;s related to the type and nature of the mission they were executing downrange and the number of times soldiers have deployed," Axtman said. "Some of them are on their fourth or fifth deployment, and after a while the mental baggage builds up."

Typically, there is what Axtman called a "honeymoon period" when a soldier returns from a deployment.

"They are just so happy to be back and be with their families that we don&#8217;t see the significant symptoms for the behavioral disorders surfacing for between 90 and 120 days post-deployment."

For that reason, the Army does a post-deployment health assessment two weeks after soldiers return home and again at 90 to 120 days after, he said.

In Europe, Army leaders have seen the number of soldiers in the WTUs drop to 187 after having more than 400 troops in their units last summer. In Vilseck, for example, there currently are 32 soldiers in the unit, down from 60 a couple of years ago, said Vilseck WTU 1st Sgt. John Silva.

Currently, there are 65 personnel staffing the WTUs in Europe, Axtman said, although that number is likely to decline because of the declining number of soldiers sent to the units. But with casualties rising in Afghanistan, WTUs are unlikely to disappear in the near future, he said.