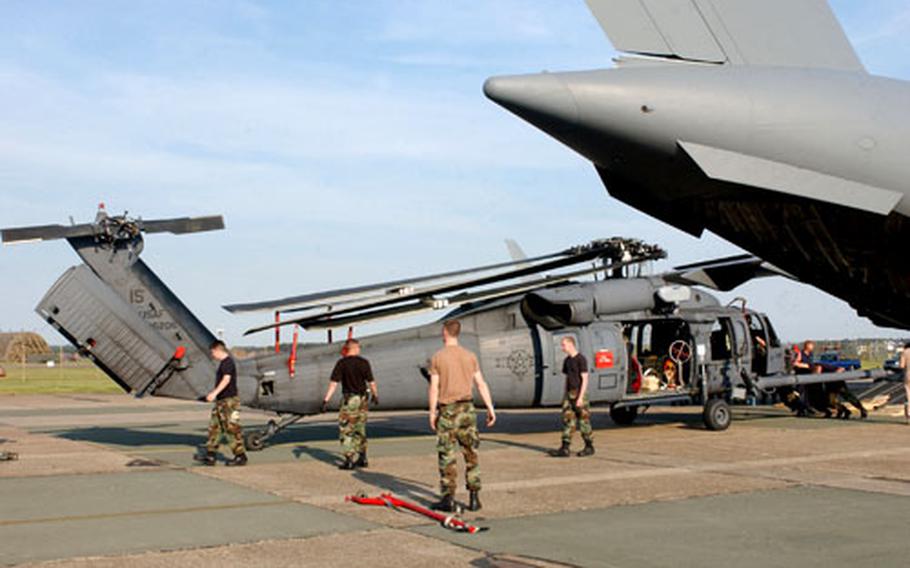 Airmen at RAF Lakenheath help unload a HH-60G helicopter delivered on a C-17 Monday. The aircraft and a small number of personnel are being reallocated to the England fighter base from Naval Air Station Keflavik, Iceland, this summer. (Sabrina Johnson / Courtesy of U.S. Air Force)

The only unit based in Naval Air Station Keflavik, Iceland, that will be left intact when the base closes down later this year started its move to a new home at RAF Lakenheath, England, this week.

Two HH-60G Combat Search and Rescue helicopters and personnel from the 56th Rescue Squadron arrived at Lakenheath aboard C-17 cargo planes Monday and Tuesday, the vanguard of five aircraft that will be stationed there by the fall, according to an Air Force news release.

The move comes amid the exodus from NAS Keflavik, which got under way in March with the U.S. government&#8217;s announcement that it would shutter the outpost and reduce the U.S. presence to a fraction of its current size.

Prior to this week, military officials had not publicly announced its plans for the Iceland-based units in the face of the closure, though most personnel had already been reassigned and many left the station.

Iceland Defense Force spokesman Fridthor Eyedal said Friday that all other units that called the base home, including Navy detachments assigned there, will be disbanded, most significantly the Air Force&#8217;s 85th Group and its five subordinate squadrons.

The 85th Group is the command and control unit for the Air Force in Iceland, and will furl its colors June 28, he said.

Of the 56th Rescue Squadron&#8217;s Iceland-based personnel, only about 25 members and their families will make the move to England, said Capt. Beth Horine, spokeswoman for the 48th Fighter Wing, the unit&#8217;s parent command. The rest have been reassigned or otherwise transitioned, she said.

Over the next year, the 56th will take on new personnel until it reaches a functional size of about 200 airmen, she said.

Two of the unit&#8217;s helicopters will remain in Iceland until mid-September, with the fifth moving to Lakenheath sometime in the coming months, according to Thursday&#8217;s release.

The loss of the aircraft and rescue personnel has been a sore point with Icelanders unhappy with the U.S. pullout.

American rescuers have aided or saved hundreds of people in the dangerous waters and terrain around the island nation in the past three decades, according to Eyedal.

Back at Keflavik, the base is reaching the climax of its efforts to be empty by Oct. 1, the closure date set back in March. Base commanders have said that by mid-July, the original population of about 2,500 servicemembers and civilians will be reduced to fewer than 500.