As he exits, Hagel warns of limits to military power 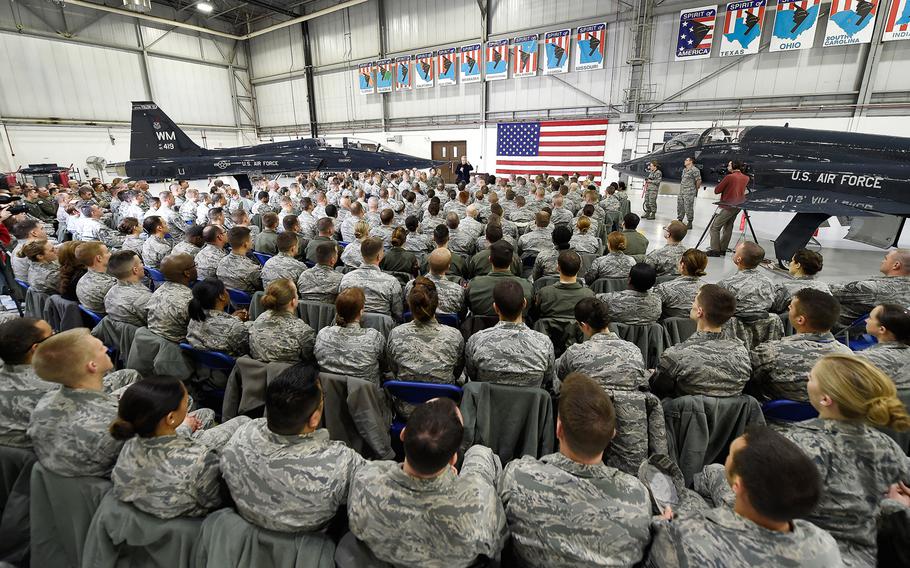 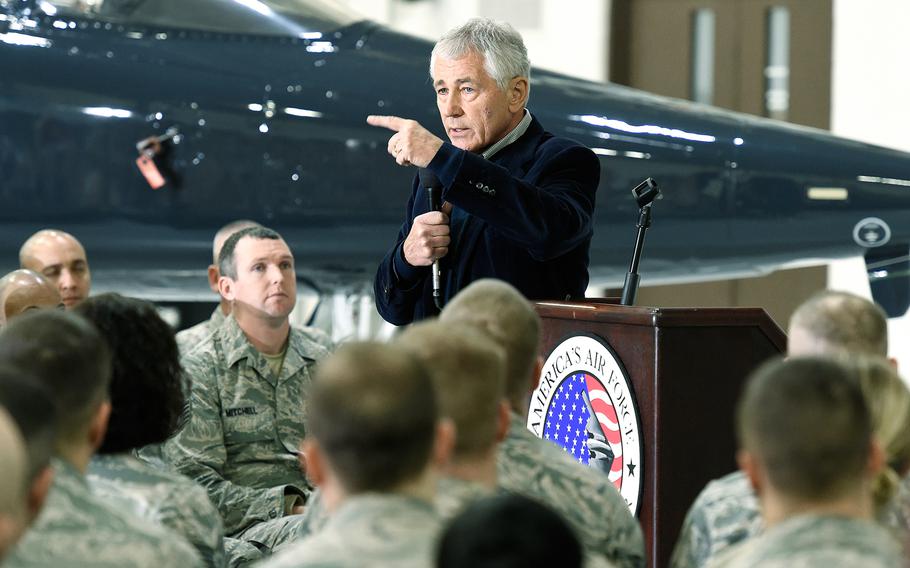 Buy Photo
Secretary of Defense Chuck Hagel speaks to troops aboard the USS America off the coast of California. (Jon Harper/Stars and Stripes) 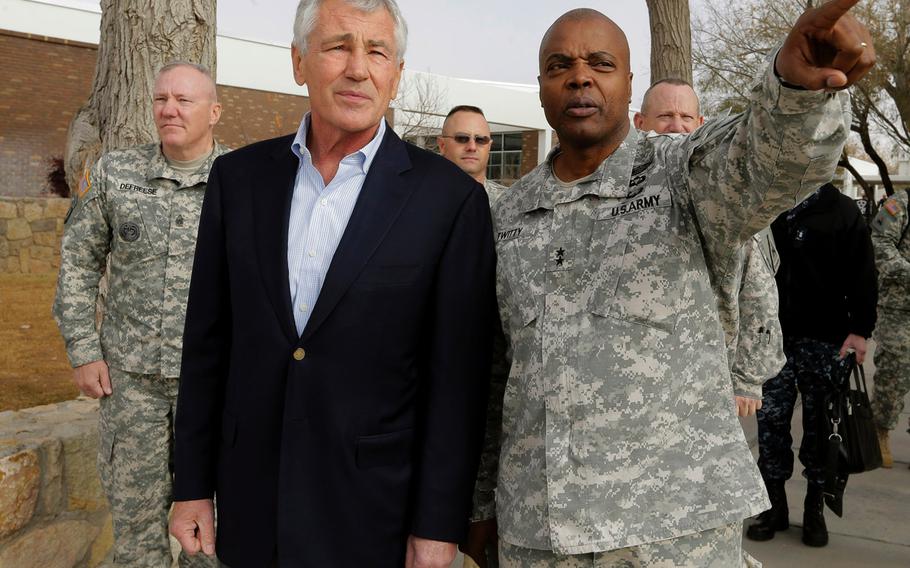 Secretary of Defense Chuck Hagel listens to Fort Bliss Commanding General Maj. Gen. Stephen Twitty as he points out some of the newer living quarters on base as compared to some of the older housing that still stands in the older portion of Fort Bliss where Hagel lived while attending basic training there in 1967, on Jan. 15, 2015. (Ruben R Ramirez, The El Paso Times/AP) 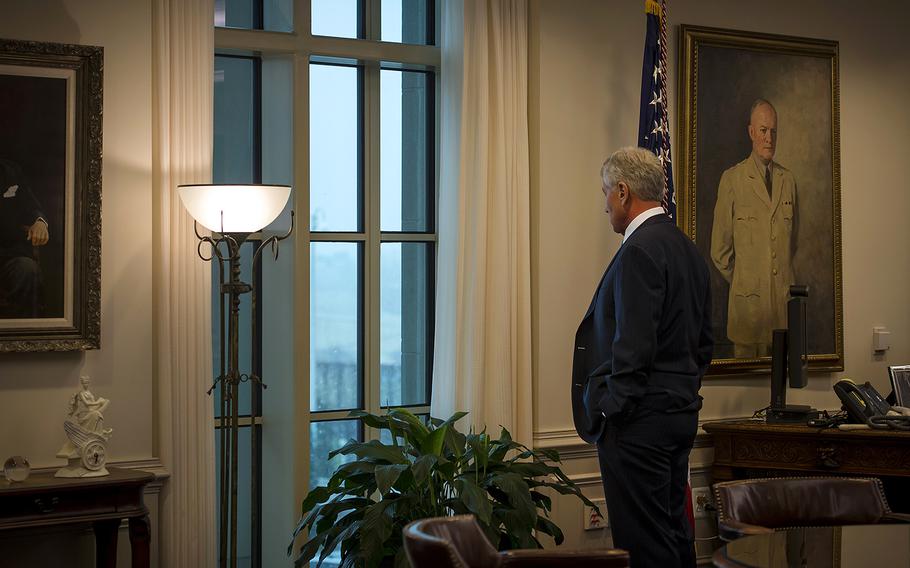 Secretary of Defense Chuck Hagel waits for junior enlisted military personnel assigned to the National Capital Region to arrive at his office in order to host a lunch and listen and discuss their concerns at the Pentagon, Jan. 20, 2015. (Adrian Cadiz/Defense Department)

WASHINGTON — As he prepares to hand over the reins of the Pentagon, Defense Secretary Chuck Hagel is warning that military power has its limits and Americans should avoid believing that force alone can transform conflict-riven societies in the Middle East and elsewhere.

“It is easy to drift into other missions, and I do believe that you always have to ask the tough questions, [such as] what happens next? Where do you want this to end up,” Hagel said in an interview with Stars and Stripes and Military Times. “Any secretary of defense has to always be on guard that we don’t inadvertently sometimes drift into a more accelerated use than we thought of what our military was going to be [doing] … I think the two long wars that we were in the last 13 years is pretty clear evidence of … how things can get out of control, and drift and wander.”

Hagel’s warning came as the U.S. military has returned to Iraq -- this time to help the Iraqi government defeat the Islamic State which has seized about a third of Iraq and Syria. The U.S. Central Command is conducting an air campaign against the militants, and about 1,550 U.S. troops have been sent to Iraq to train and advise government and Kurdish peshmerga forces. Another 800 troops are providing force protection.

President Barack Obama has ruled out using U.S. combat troops to fight the insurgents and has placed a cap of 3,100 personnel on the number of U.S. military forces deployed to Iraq. But some members of Congress have urged the U.S. to play a more robust military role. Meanwhile, about 10,600 U.S. troops remain in Afghanistan to advise and assist Afghan forces even though the American combat role ended last month.

Hagel’s caution about mission creep stems from his experience as a combat infantryman in Vietnam, where a U.S. advisory role morphed into a long and divisive war involving at its height about a half million American servicemembers.

As a combat veteran and former VA official, Hagel is sensitive to the effects of open-ended military commitments on the force, including active duty members, their families and veterans.

Since assuming the post in early 2013, Hagel has initiated institutional reforms and a number of reviews to try to get at some of the problems affecting the military community. He said he probably devoted as much time to these issues as anything else. But he remains worried about the health of the all-volunteer force after 13 years of counterinsurgency fighting, and thinks more work needs to be done.

Physical and mental health, suicide, morale, and sexual assault within the ranks are some of the major people issues that Hagel has tried to tackle during his tenure.

At the same time, budget cuts, troop reductions and concern over pay and benefits have left the rank-and-file uncertain about their future.

“Anytime there is uncertainty in an institution or a family … you will have people off balance,” Hagel said. “They will be concerned, and of course they are [right now] … I think there is a good deal of uncertainty out there.”

Hagel said it was impossible to solve all of the problems on his plate during his fairly short tenure, but he’s proud of his efforts to get the ball rolling in the right direction.

“You’re not going to fix some of this in a year or two years, but … you can start to turn it around,” he said. “I hope that we can continue to do these things [after I leave] because health of the force is essential to everything we do,” he said. “If you really have major breakdowns, you will not be able to continue to recruit and retain quality people. And without quality people, you don’t have much.”

In the past, Hagel has discussed problems that plagued the force when he was in Vietnam, including poor discipline and tensions within the ranks.

“I’m a little more oriented to these kinds of human dynamics and health of the force issues than maybe some would be, because I saw it, I lived it, I understand it,” he said.

When the former infantryman was asked if he had any concerns about women being integrated into ground combat units — a concept the services are experimenting with — he said: “Anyone who is qualified and capable and wants to do a job in the military should have the opportunity to do that. [But] we’re not going to lower standards … No one wants that. [But] if you’re quality, you’re capable [and] you want to do it, you should have an opportunity.”

Hagel was asked whether transgender people should be allowed to serve in the military. They are currently barred from doing so, but there are calls from the LGBT community and elsewhere to change the rules.

He declined to say whether he thought the exclusion should be lifted, but noted that the military has dealt with controversial policy changes in the past, including racial integration, the repeal of Don’t Ask, Don’t Tell, and gay marriage.

“This institution has been on the cutting edge of social change in this country since World War II,” he said.

He believes the military needs to respect the desires of individuals to serve, but not make any changes that would jeopardize mission preparedness.

“I have confidence in the process and the system [and believe] that the transgender issue will be dealt with in a fair way,” he said.

Hagel is expected to be replaced next month after his nominated successor, Ashton Carter, is confirmed by the Senate.