As Germany prepares for NATO crisis-response role, its military readiness is ‘abysmal’ German submarine U-33 steams in the Atlantic during maneuvering drills as a part of exercise Dynamic Mongoose in the Atlantic Ocean in 2015. None of Germany?s submarines are currently operational. (Amanda S. Kitchner/U.S. Navy) 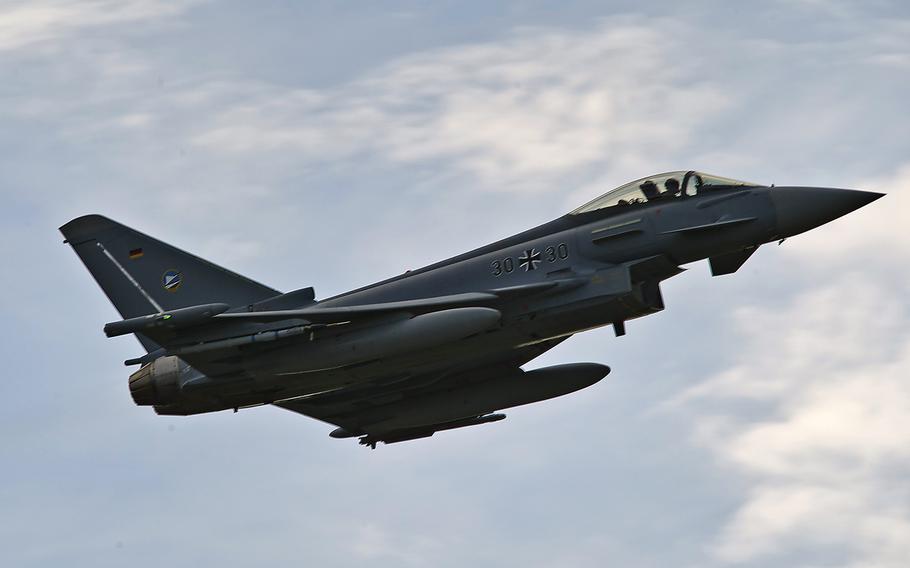 A German Air Force Eurofighter Typhoon takes off from Eielson AFB, Alaska, for a combat training mission in 2012. At the moment only four of Germany's 128 Eurofighters are combat-ready. () 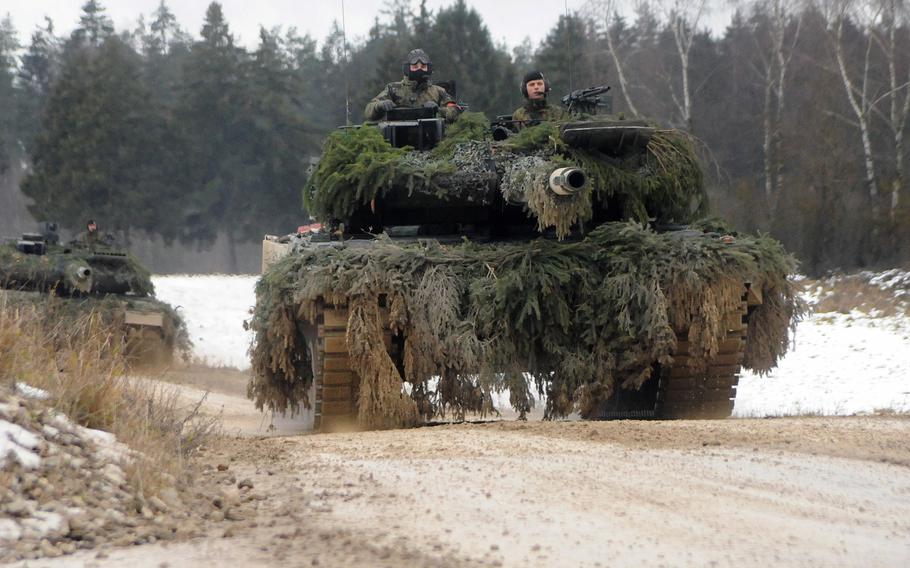 STUTTGART, Germany — Germany’s military is virtually undeployable and security experts say it is too weak to meet its obligations to its allies, as it prepares to assume command of NATO’s crisis response force next year.

Pressure on Berlin is mounting after a series of revelations has exposed the German military as one of the least combat ready in NATO, despite its economic heft.

“The readiness of the German military is abysmal,” said Jorge Benitez, a NATO expert with the Atlantic Council in Washington. “For years, German leaders have known that major elements of their armed forces, such as tanks, submarines and fighter jets, are not fully operational and can’t be used for actual military missions.”

The military dysfunction is likely to re-emerge as a flashpoint between Berlin and Washington when President Donald Trump attends a NATO summit in July.

Berlin’s persistent shortcomings and resistance to meeting NATO spending targets is likely to further strain relations with Washington and risks a standoff that could eventually test the unity of the alliance and the American commitment to it.

Trump, long ambivalent about the value of NATO, remains fixated on Germany as a security free-rider: The alliance “helps them a hell of a lot more than it helps us,” Trump said in December.

New German capability gaps have been brought to light in recent weeks, piling up on top of old ones that Berlin has failed to fix.

Among the failures: none of Germany’s submarines is operational, only four of its 128 Eurofighter jets are combat-ready and the army is short dozens of tanks and armored vehicles needed for NATO missions.

In addition, troops are short on the basics: body armor, night vision gear and cold-weather clothing.

The situation is so dire that 19 helicopter pilots from Germany’s Bundeswehr were forced to turn in their flight licenses because of a lack of training time.

The reason: not enough helicopters for the pilots to fly.

A low priority Internal military documents and investigations by German media have cast a spotlight on Berlin’s failure to reverse the steady slide in combat readiness, which comes as concerns about a more aggressive Russia increase demand for more agile NATO militaries.

Yet there is little sign that Germany’s political leadership will do much, with parliament locked in partisan budget disputes about defense spending.

On Monday, Defense Minister Ursula von der Leyen said she expected military spending to reach 1.5 percent of economic output in 2025, which means that short of a dramatic change, Berlin will renege on a pledge it made to the U.S. and NATO allies in 2014 when members agreed to hit the 2 percent mark within a decade.

German Chancellor Angela Merkel’s Christian Democratic Union has historically been the mainstream party that advocates for stronger defense spending. On Monday, Merkel conceded German “credibility” was at stake and that defense expenditures must increase.

Von der Leyen is requesting a $14 billion boost over current budget plans. The request is facing resistance from Germany’s finance ministry, which has planned a roughly $6.6 billion increase over four years.

While Germany has slowly increased its defense spending in recent years, the $37 billion budget is only about 1.24 percent of its GDP.

“Germany has the largest economy in Europe, but has been dragging its feet on fixing its scandalous defense problems,” Benitez said. “Part of the problem is political and reflects the willingness of German leaders to consistently inhibit defense spending for the sake of other priorities.”

One obstacle to boosting defense spending could be Trump himself. The U.S. president is deeply unpopular in Germany and appearing to kowtow to Trump’s demands in the form of ramping up military investment could be politically damaging.

Little demand for a better force Another aspect of the country’s reluctance to ramp up military investment is a broad cultural discomfort with the idea of trying to re-establish itself as a military power, which conjures memories of Germany’s defeats in two world wars.

Once home to some of the world’s most sophisticated military thinkers— 19th century Prussian Gen. Carl von Clausewitz is still required reading for every American general — the Germany of today tends toward pacifism.

A recent survey in Germany by the Pew Research Center found that 51 percent of those polled want defense spending to hold steady, while 13 percent want cuts. Only 32 percent want to increase spending.

There are also bureaucratic obstacles to increasing military expenditures. The Germany defense budget is the only part of the government where any expenditure of over 25 million euros, or about $30 million, requires parliamentary approval. Bureaucratic logjams also have hindered defense procurement.

Responsibility for leading the task force rotates among alliance members.

German defense ministry documents, obtained by the German Die Welt newspaper, revealed that the brigade slated to deploy on the NATO mission only has nine of the 44 Leopard 2 tanks and three of the 14 Marder armored personnel carriers that are required.

German defense officials have said they are working to address the shortfalls and said the unit will be ready to lead the NATO task force. But the military’s problems run deeper than manning one brigade for a single NATO mission.

“The army’s readiness to deploy has not improved in recent years, but instead has gotten even worse,” Parliamentary Armed Forces Commissioner Hans-Peter Bartels said in February upon release of an annual report on the state of the armed forces.