As exercise ends, Romania OKs U.S. use of four bases 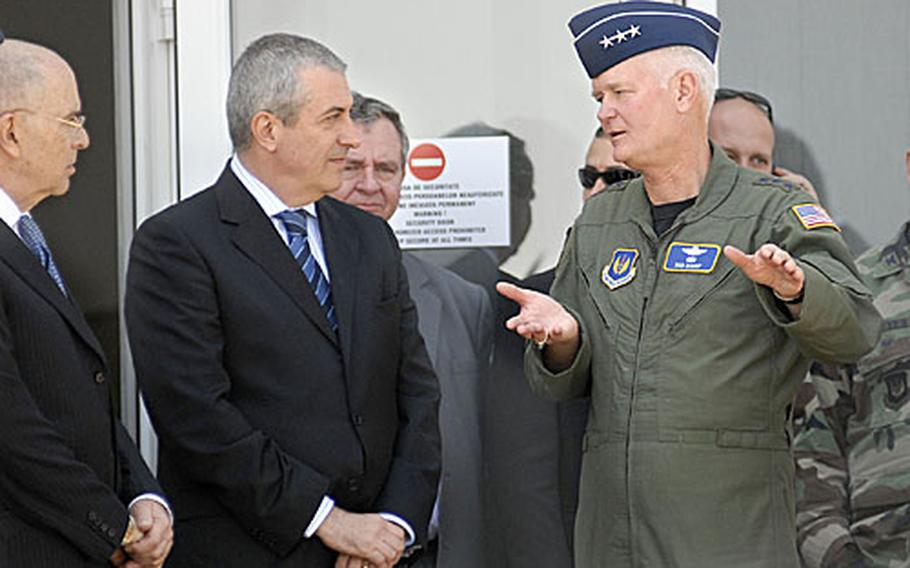 MIHAIL KOGALNICEANU AIR BASE, Romania &#8212; The U.S. Air Force wrapped up a 10-day exercise here Thursday, one day after the Romanian parliament voted to allow the U.S. to use four military bases in this former Eastern Bloc country.

At a press conference marking the closure of the exercise, Romanian Prime Minister Calin Popescu-Tariceanu said this week&#8217;s agreement &#8220;confirms the privileged status of relationships between the U.S. and Romania.&#8221;

&#8220;I am convinced that the presence of U.S. forces will contribute to international security in the region and globally,&#8221; Popescu-Tariceanu said through an interpreter.

U.S. Ambassador to Romania Nicholas Taubman thanked the Romanian government for the use of the bases while also expressing Romania&#8217;s sovereignty over the installations.

&#8220;This is a Romania base upon which the United States and other NATO partners will train,&#8221; Taubman said. &#8220;The vote taken in the Romanian parliament is just another eloquent landmark in our transatlantic relationship.&#8221;

Wednesday&#8217;s agreement, which passed 257-1 with 29 nationalists abstaining, allows for up to 3,000 American troops to be stationed here.

U.S. Secretary of State Condoleezza Rice signed a presence agreement in December 2005 that allowed U.S. forces to be stationed in Romania. The presence agreement came two years after the U.S. military used Mihail Kogalniceanu Air Base to launch the northern front of the initial campaign to topple Saddam Hussein.

The country has played host to two U.S. Air Forces in Europe training exercises in the past nine months, and the U.S. military is working on construction projects across this facility, which is also home to the Constanta International Airport.

The military has not established a firm date, but it soon hopes to open a Joint Task Force for Eastern Europe, managed largely by the Army with support from the Air Force.

During the press conference, Romanian reporters also peppered the prime minister with questions on Thursday&#8217;s discovery of 60 kilograms of heroin in the building that houses the parliament.