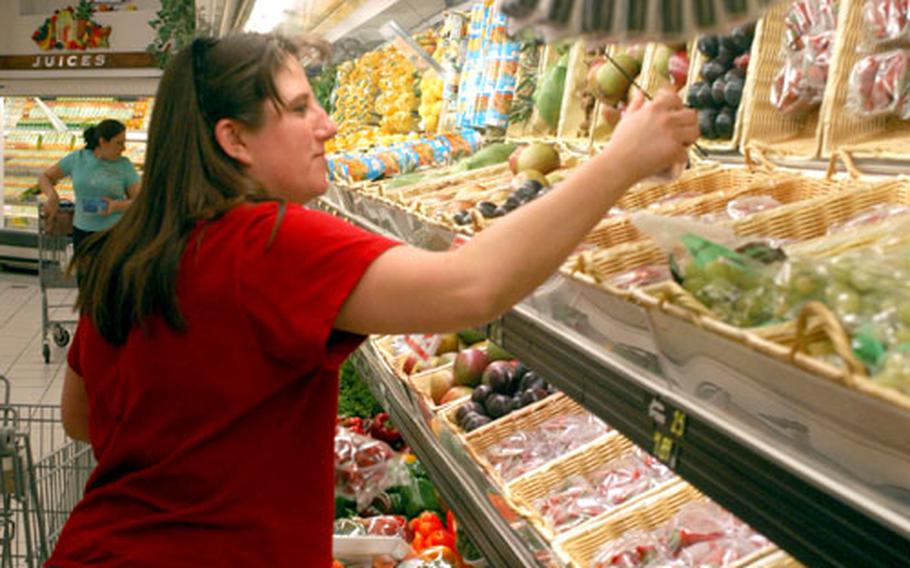 Teresa Dooms selects a few pieces of fruit Monday at the Defense Commissary Agency’s store at Aviano Air Base in Italy. Items produced in the States are a bigger bargain on base with the euro rising against the dollar. (Kent Harris / S&S)

Even last month&#8217;s announcement that the cost-of-living allowance given to U.S. troops in Germany will begin a major slide May 1 has done little to change how much they&#8217;re willing to spend off post in the country &#8212; at least in dollars.

But the weakening exchange rate has cut into the amount of goods and services troops can buy off base.

Sgt. Tiara Marshall, for example, has continued to spend about $400 a month to restore her classic Mini Cooper. But because of the exchange rate, that $400 doesn&#8217;t go as far as it used to.

The euro rate at U.S. military banks on Tuesday was .7383, a nearly two-year low.

She used to spend about 200 euro every pay period to restore the car, but as the dollar dropped, &#8220;that was actually chunking into my food money,&#8221; said Marshall, a member of the 66th Military Intelligence Group in Darmstadt.

Staff Sgt. Kevin Eick thinks dwindling drinking budgets are one positive effect of the weaker dollar. Sure the exchange rate is terrible, he admitted. But, &#8220;There are facilities here that let you buy things&#8221; in American dollars, he said.

Indeed, no troop who spoke to Stars and Stripes said they were suffering financially, and some who live more simply or don&#8217;t spend much off post have continued to do well.

But some who haven&#8217;t curbed their off-post spending have seen their savings dwindle.

&#8220;We still have some spending money,&#8221; Sgt. Andrew Majors, a member of the 32nd Signal Battalion in Darmstadt, said as he stood outside the Army and Air Force Exchange Service store at Kelley Barracks with his wife, Spc. Tabetha Harrison. But &#8220;my savings from downrange is gone,&#8221; he said.

Harrison added that saving money has recently been impossible for the two, largely because they haven&#8217;t cut back on spending. But they aren&#8217;t despairing. &#8220;We do pretty well for ourselves,&#8221; Majors said.