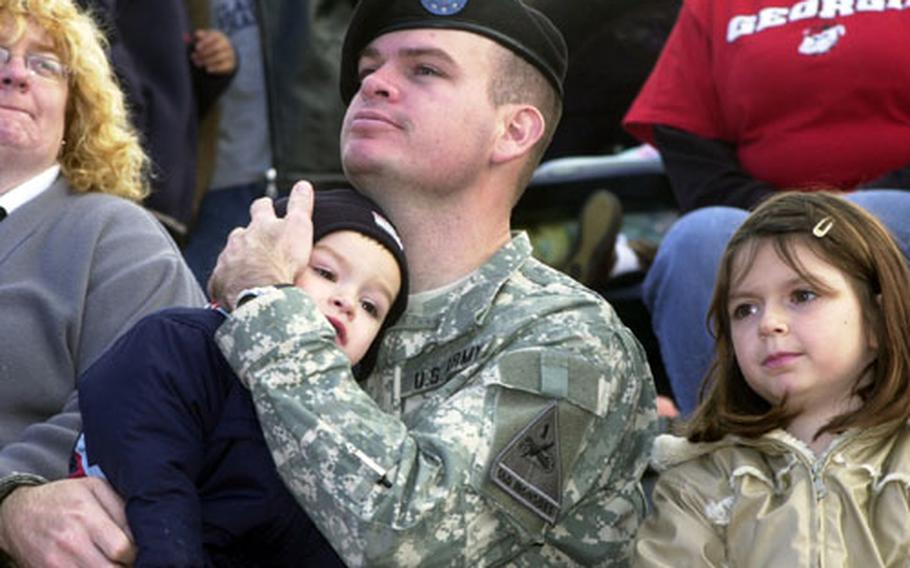 Leaving family behind for a year may be the most difficult thing about deploying, soldiers and officers say. Sgt. 1st Class Chad Taylor sits with his son Hunter, 3, and daughter Kimberly, 8, at the end of Thursday’s ceremony. (Terry Boyd / S&S)

Leaving family behind for a year may be the most difficult thing about deploying, soldiers and officers say. Sgt. 1st Class Chad Taylor sits with his son Hunter, 3, and daughter Kimberly, 8, at the end of Thursday’s ceremony. (Terry Boyd / S&S) Maj. Eloy Guerra had a central position on the field Thursday during the 2nd Brigade Combat Team’s deployment ceremony, with the flag corps behind him. Guerra says every soldier and officer who joins the Army expects this day to come. (Terry Boyd / S&S) 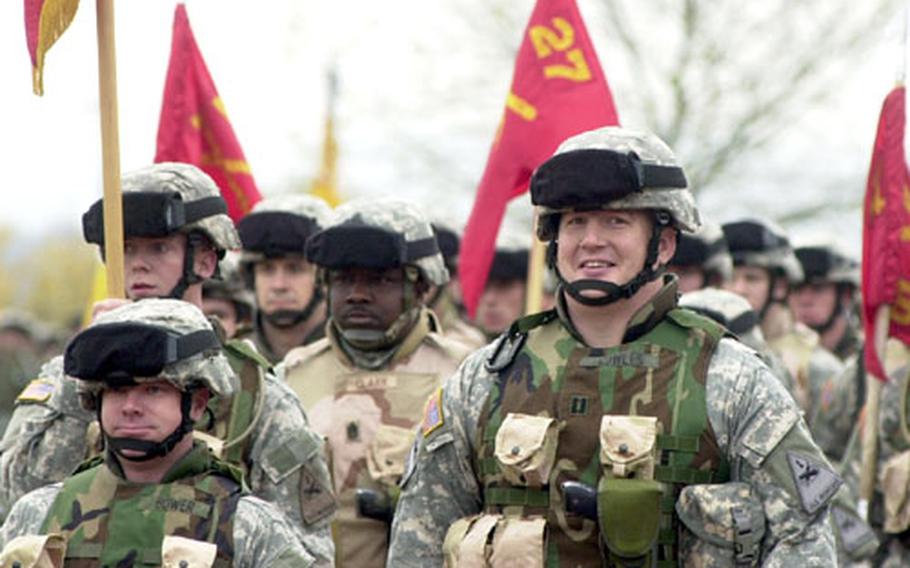 This young captain with the 4th Battalion, 27th Field Artillery Regiment was all smiles as his unit filed onto Minnick Field in the deployment ceremony Thursday. (Terry Boyd / S&S)

BAUMHOLDER, Germany &#8212; There are some military ceremonies that are routine to the point of boring.

From the first time to the last, deploying to war is elementally dramatic, and in the formations and the reviewing stands, 5,000 hearts beat faster, thinking about the year to come.

Profound as weddings, births, baptisms, first communions or graduations, the deployment ceremony is the dividing line between whatever doubts people might have and the reality of duty and responsibility.

When it came time Thursday for the 2nd Brigade Combat Team&#8217;s deployment ceremony, Maj. Gen. Doug Robinson acknowledged the profoundness of the day and the vast complexities of the mission.

Thursday marked the second deployment for many of the roughly 4,500 troops on Minnick Field in the center of H.D. Smith Barracks, &#8220;and I understand it does not come easily,&#8221; Robinson said.

This time, though, soldiers and families had much more time to prepare, from training at Grafenw&#246;hr and Hohenfels during the 18 months since they returned, to a bon voyage carnival with free rides and refreshments at Baumholder.

But there are unknowns &#8212; exactly what the 2nd BCT will do and where its soldiers will go in an environment that ranges from fairly stable to sustained combat is still highly classified, according to 1st AD and Army sources at the Pentagon.

Clearly, though, the overall situation in Iraq is far more volatile than in 2003, which is causing deep concern.

&#8220;It&#8217;s scarier than the first time because you know what can happen down there,&#8221; said Nicole Taylor, whose husband, Sgt. 1st Class Chad Taylor was making his second trip to Iraq with the 2nd Battalion, 6th Infantry Regiment.

Understanding counterinsurgency, too, has evolved radically from the first deployment, and Robinson told his soldiers that intensified and expanded training has prepared them for any mission.

&#8220;You have trained and mastered the tactics of urban patrols, cordon searches, raids, convoys, ambushes &#8230; soldiers trained and ready to fight on a multidimensional battlefield,&#8221; he said.

In the final analysis, Thursday&#8217;s deployment ceremony underscored what every person here knows &#8212; soldiering is simply a dangerous, demanding line of work.