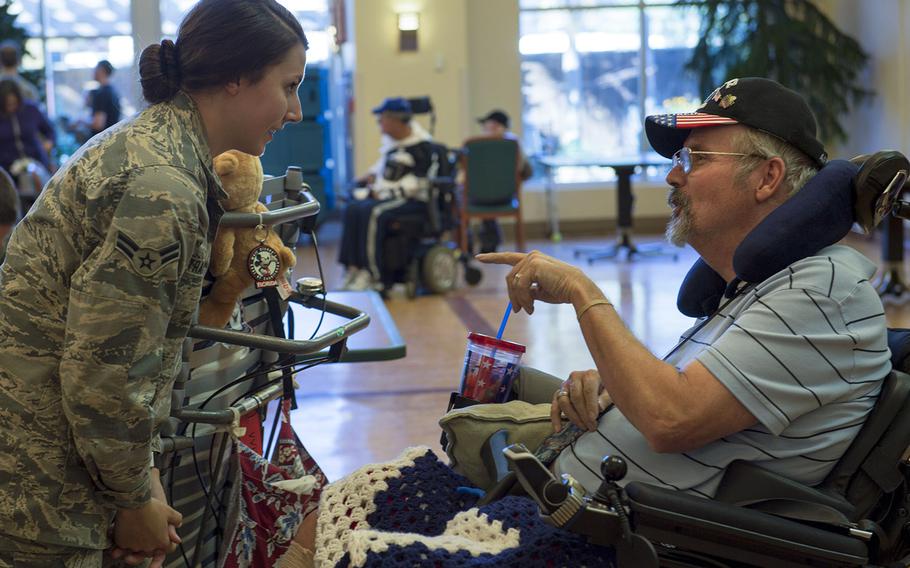 As Congress prepares for budget negotiations for the 2018 fiscal year, a bipartisan group of 28 senators is urging appropriators to increase funding dramatically for veterans nursing homes.

In a letter Wednesday to the Senate Appropriations subcommittee that handles veterans affairs, Sen. Gary Peters, D-Mich., and Sen. Thom Tillis, R-N.C., asked for “robust funding” to tackle some of a backlog of about 100 construction and renovation projects for veterans homes across the country. Federal funds are made available to state-run veterans homes through a Department of Veterans Affairs grant program, but – as the veteran population ages – there are more requested projects than there is money to fund them.

“The growing backlog… presents challenges to meeting the long-term care needs of these veterans, particularly in rural states,” the letter reads.

In total, there are more than $1 billion in grant requests for veterans homes pending at the VA.

During the past several years, Congress provided $85 to $90 million annually, according to Sganga’s testimony to a House Appropriations subcommittee in March.

That amount “was barely enough to keep up with new grant requests from states, and failed to make any headway with the existing backlog,” Sganga said at the time.

If funding was to remain the same for 2018, the backlog would continue to grow, he said. Sganga estimated only seven projects would be funded if Congress provided $90 million in 2018 as it did in 2017.

The $300 million that Sganga is requesting would fund 35 projects, he said. Three veterans organizations are also advocating for increased funding. Veterans of Foreign Wars, Disabled American Veterans and Paralyzed Veterans of America publish a list of budget recommendations for the VA each year, known as the Independent Budget. For 2018, it calls for $300 million in funding for veterans homes.

The senators’ letter did not state the amount they were requesting for veterans homes, but asked repeatedly that it be “robust.”

There are 153 state veterans homes providing approximately 30,000 beds across the United States and Puerto Rico.

“Federal funds made available through the VA State Home Construction Grant Program allow states to make critical renovations and upgrades to existing facilities and construct new facilities to serve the aging veteran population,” the senators’ letter reads. “These grant opportunities are important to ensure that each state veterans home facility continues to meet VA’s standards and delivers the highest caliber of care to veterans.”

The VA was one of only a few agencies that President Donald Trump recommended for a slight funding increase in a proposal released earlier this year. Areas of the VA where extra funding would be spent, though, were not specified.

The VA has not yet released its recommended budget for 2018. VA Secretary David Shulkin was expected to testify Wednesday to a House Appropriations subcommittee.