As coalition troops disappear, Afghan educations could too 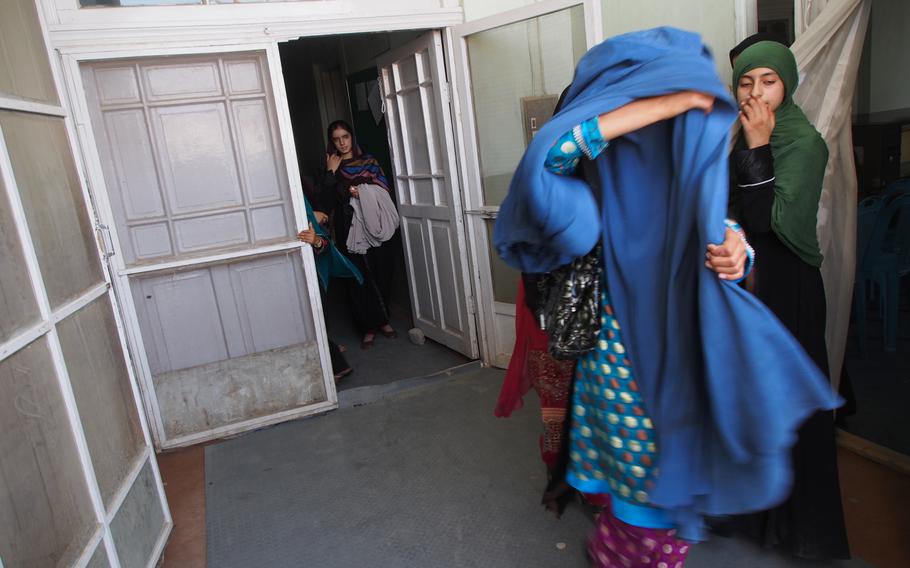 A girl puts in a burqa as she leaves the Kandahar Institute of Modern Studies in June. The school, like many in Afghanistan that focus on girls' education, is having major financial difficulties as international organizations scale back operations ahead of the Dec. 31 deadline for the departure of all foreign combat troops. (Heath Druzin/Stars and Stripes)

A girl puts in a burqa as she leaves the Kandahar Institute of Modern Studies in June. The school, like many in Afghanistan that focus on girls' education, is having major financial difficulties as international organizations scale back operations ahead of the Dec. 31 deadline for the departure of all foreign combat troops. (Heath Druzin/Stars and Stripes) 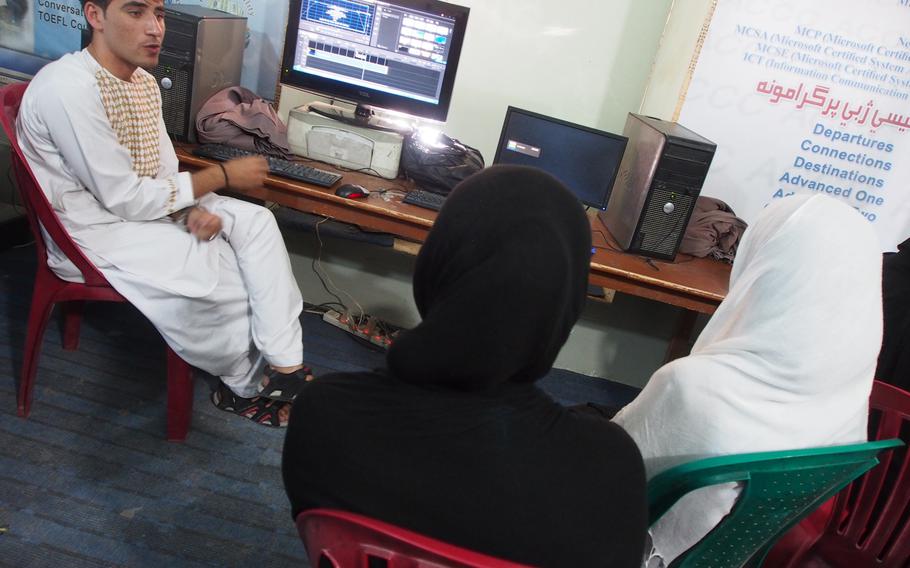 Students take a computer science class at the Kandahar Institute of Modern Studies in June. Some educators worry that gains in girls' education since the Taliban's overthrow are in danger now that international troops are withdrawing from the country. (Heath Druzin/Stars and Stripes) 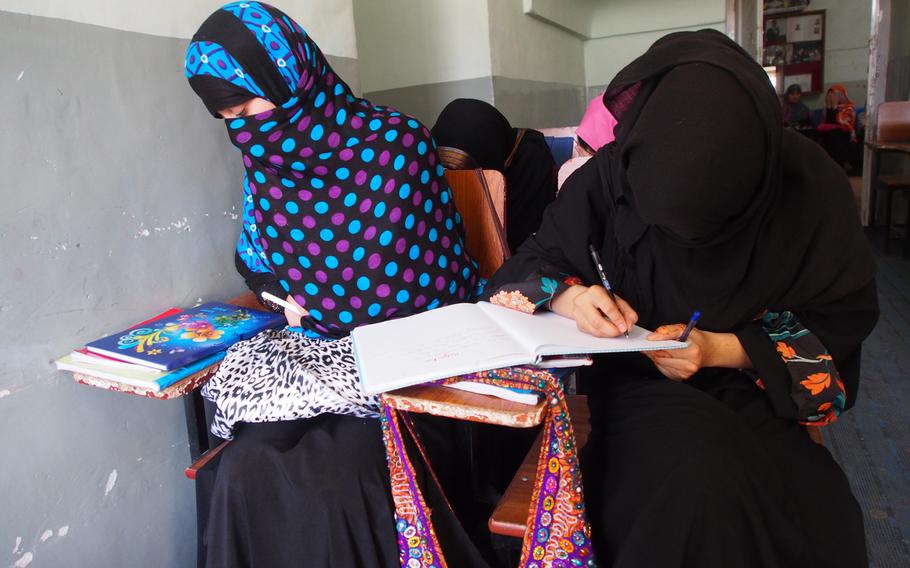 Girls study in one of the spare classrooms of the Kandahar Institute of Modern Studies, a co-educational school aimed at preparing Afghan girls and boys for college. Like many other private schools in Afghanistan, the institute is struggling financially. (Heath Druzin/Stars and Stripes) 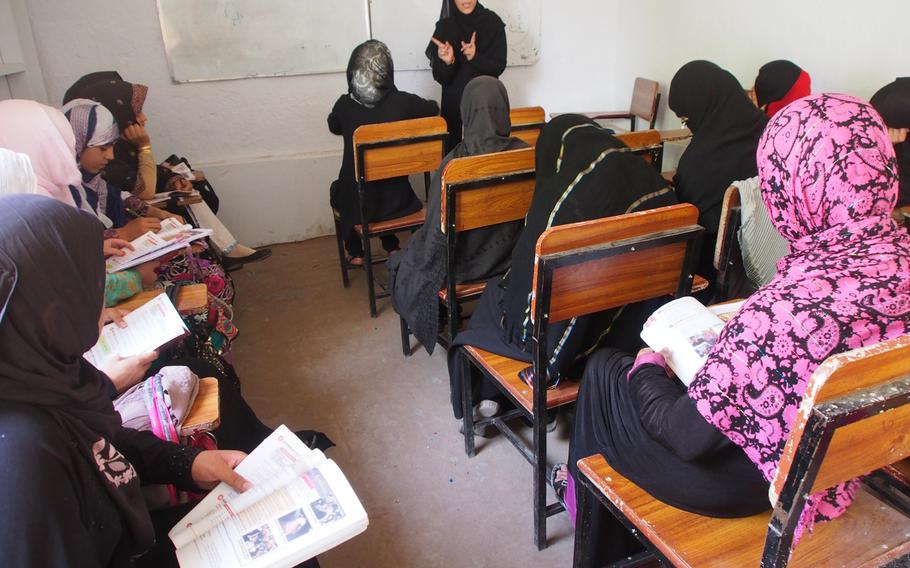 A teacher conducts a class at the Kandahar Institute of Modern Studies, a private co-educational school in a city that is the Taliban's spiritual heartland. Ehsanullah Ehsan, the school's founder, says he still gets death threats for his outspoken views on girls' education. (Heath Druzin/Stars and Stripes) 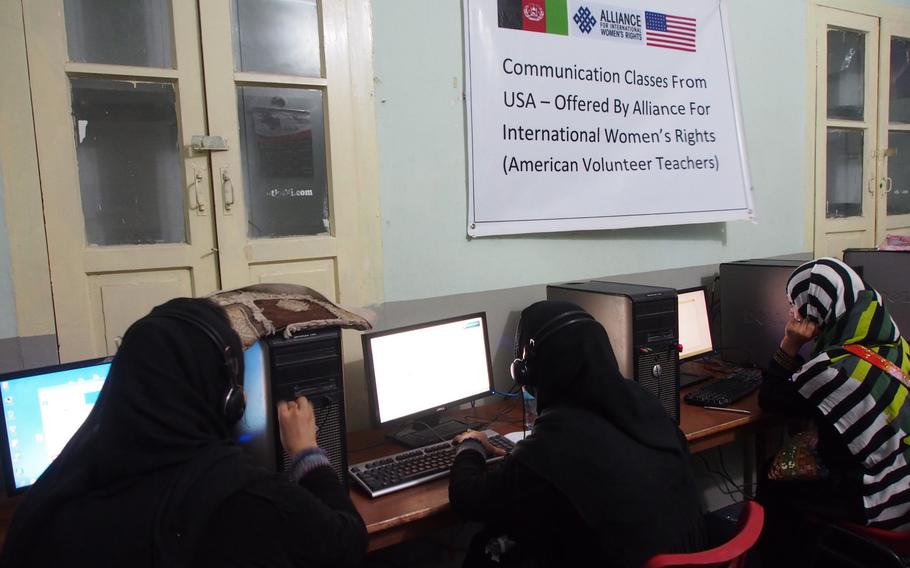 Students get mentoring from American teachers over Skype at the Kandahar Institute for Modern Studies. Educators at private schools like KIMS, which puts an emphasis on girls' education, are worried that the winding down of the international military mission in Afghanistan could jeopardize gains in femaile education in the country. (Heath Druzin/Stars and Stripes)

KANDAHAR, Afghanistan — Ehsanullah Ehsan’s dream of higher education was shattered by war, and he’s spent most of his adult life making sure Afghan children, especially girls, avoid the same fate. This time, the end of a military intervention imperils the dream he has braved death threats in the Taliban’s heartland to achieve.

In the spare classrooms of Ehsan’s school, the Kandahar Institute of Modern Studies, visitors witness a rarity in Afghanistan: girls and boys learning together. For many, it’s a daily escape from a rural life in which a woman often ventures no farther than the mud walls of her compound.

The roughly 2,000 students, more than half of them girls, study subjects such as English, computer science and business. Many have lofty goals.

“I plan to finish medical school and run a hospital,” 15-year-old Zakira Rasuly said. “In Afghanistan we can’t make any predictions (about) the future, so it is the time to study hard, get an education and serve your country.”

For the institute and many others like it, the evaporation of international money that has accompanied the withdrawal of international military forces threatens to shutter their doors and reverse one of the few tangible achievements of a controversial war: a vast improvement in girl’s education.

'Education is light' After five years of Taliban control, during which girls’ education was virtually non-existent, the number of girls going to school since the U.S. military invaded the country in 2001 has increased dramatically. The Afghan Ministry of Education says 4.5 million girls are in school, though the reliability of such statistics is fiercely debated.

Still, deep problems remain, despite more than a decade of intensive international efforts to improve education for girls in a country where the female literacy rate is an abysmal 18 percent, according to United Nations figures. Rural areas, where the majority of Afghans live, have been disproportionately affected by the war. Insurgents use violence to keep students and teachers away from schools.

Conservative traditions, too, are still a big obstacle in a country where 46 percent of girls are married before the age of 18, according to U.N. statistics.

“Still in some places, there are family who are not full ready to accept sending their girls to schools because of cultural issues,” said Sayed Naeem Alami, an education expert and the head of the literature university of Kabul. For 12 years, Ehsan has been battling conservative views and Taliban threats to prepare children like Zakira, many of them girls from poor villages, for professional life.

“Education is light; education is the backbone of a nation,” he said.

As a teenager, Ehsan was intent on going to college and focusing on his education, but his dream vanished as Soviet troops rolled into Afghanistan and his family eventually fled to Pakistan as refugees. He never made it to a university, and he’s been working his entire adult life to help children of war avoid the same fate, first opening schools for refugees in Pakistan in the 1990s.

“I’m not highly educated and I’m not a rich man, but I thought I could do something,” he said.

Then, with the 2001 U.S. military invasion and subsequent ouster of the ultraconservative Taliban government, which had largely banned women’s education, Ehsan saw his opportunity to continue the work in his own country. In early 2002, he began work in one of the most conservative corners of Afghanistan on what would become the Kandahar Institute of Modern Studies.

“The intimidations were many, not only from the extremists, but also from the warlords and the tribal lords,” Ehsan said.

Slowly, though, he convinced tribal leaders from villages where resistance to the education of girls often predated Taliban rule that there was value in educating everyone. He brought them to the school to show them there was nothing sinful about his classrooms, and he plugged the economic benefits of educated women.

“Civilization, a peaceful life, progress, development, a better life can come through education,” he said. “And that cannot happen without women.”

Ehsan has passed on his passion for learning: His daughters, Nargis and Balqis, are students at KIMS and two of the school’s fiercest defenders.

“Education is the only thing, the only weapon, the only power that can change the world,” 17-year-old Balqis said. “We are tired of war — we want to change this situation, these wars, through education.”

Playing hide and seek The Taliban are not convinced, though they have softened their public stance. They continue to threaten teachers and target schools throughout the country, and educators like Ehsan are prime targets.

Ehsan says he receives intimidating letters at night, often with a bullet attached, and phone calls threatening death for him and his family. Family members have been badly beaten and his school buses pelted with rocks.

“I have to play hide-and-seek. Otherwise they would kill me,” he said.

The threat he worries about most today is the fallout from the end of NATO’s combat mission and the accompanying exit of international organizations and funding so key to projects like his. For five years he received funding from the Canadian government, a source that dried up when Canadian troops left Kandahar in 2011. Since then he has hopscotched to different organizations, from the U.S. State Department to charities and even a British comedian, but each year he must work harder for less funding.

Aid to his school has dropped from $16,000 per year to $9,000. That means canceling school days because he can’t afford to keep classrooms cool in the searing summertime heat of the Kandahari or warm on frigid winter days. It means he can’t pick up the tab for as many poor students and he can’t always maintain the buses that pick up students from outlying villages and bring them to Kandahar city each morning.

“If the transportation stops, then the women cannot come out at all because they come from far away and they cannot walk on those conservative streets,” he said.

Eshanullah’s school is not the only one facing problems. The Watan Education System of Afghanistan, another co-educational institute in Kandahar, is also feeling the pinch. Though the school is privately funded by a mix of fees and local businessmen, an economy worsened by the withdrawal of international money means fewer families able to afford the school, founder Ghosadin Frotan said.

“Of course, when there is a bad economy, we lost some students, and families are unable to afford fees,” he said. “Some of the families who were sending four or five students to our school … are sending one or two now.”

In addition to less funding, educators like Ehsan and Frotan also worry about the Taliban’s gaining strength and how the government of Afghanistan — long beset by corruption — must bear more of the burden of battling an entrenched insurgency.

Despite the threats, financial problems and uncertainty, Ehsan says he is optimistic the international community won’t forget about Afghanistan. Whatever happens, he says, he’s determined to keep the school doors open as long as he can: “We will continue the education until we can’t.”

Zubair Babakarkhail contributed to this report from Kabul and M.S.S. from Kandahar.