As campaign begins, Afghans look for results, not promises 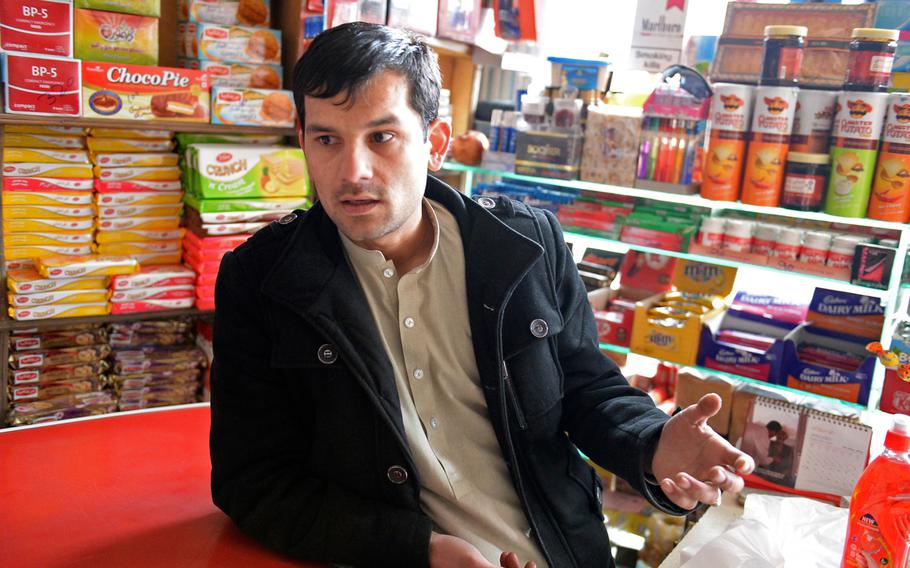 Talha Hairan, the 22-year-old owner of a shop in Kabul, says he's looking for a presidential candidate who can deliver on his promises and bring more security and economic stability to Afghanistan. The 2014 presidential election campaign in Afghanistan officially began on Sunday, Feb. 2, 2014. Josh Smith/Stars and Stripes (Josh Smith/Stars and Stripes)

Talha Hairan, the 22-year-old owner of a shop in Kabul, says he's looking for a presidential candidate who can deliver on his promises and bring more security and economic stability to Afghanistan. The 2014 presidential election campaign in Afghanistan officially began on Sunday, Feb. 2, 2014. Josh Smith/Stars and Stripes (Josh Smith/Stars and Stripes) A billboard for Afghan presidential candidate Gul Agha Sherzai, a former governor of Nangarhar province, was one of many billboards and posters put up in Kabul on Sunday, Feb. 2, 2014, as the presidential campaign officially began. (Josh Smith/Stars and Stripes) A grinning Abdullah Abdullah graces a billboard in Kabul advertizing his candidacy for the Afghan presidency. The billboards and posters were put up on Sunday, Feb. 2, 2014, as candidates were officially allowed to begin campaigning. (Josh Smith/Stars and Stripes)

KABUL — Election posters and billboards appeared around Afghanistan’s capital Sunday as the campaign officially kicked off for the crucial April election to choose a successor to President Hamid Karzai, who has led the country since the U.S.-led coalition ousted the Taliban in 2001.

Candidates vying to succeed Karzai are now legally allowed to begin their public campaigns, with rallies and televised debates planned for the coming months.

For the 11 candidates whose faces now peer down from countless posters and billboards plastered around the city, their efforts to win over voters will be complicated by an electorate weary of war and skeptical after years of what they see as broken promises from their leaders.

The vote, scheduled to take place on April 5, will mark the first democratic transfer of power since the American intervention that toppled the Taliban in 2001.

Karzai, who was appointed head of an interim administration in 2001 and won presidential elections in 2004 and re-election in the disputed and controversial 2009 election, is barred from running again after serving two five-year terms, opening the presidency to new leadership.

A key issue going into the elections is the future of international troops in Afghanistan. Tensions have risen between the Afghan government and its foreign backers, especially the United States, over Karzai’s refusal to sign an agreement that would keep as many as 10,000 U.S. troops in Afghanistan past the end of the year as part of a train, advise and assist mission, and form the basis for a status of forces agreement with NATO. Instead, Karzai is threatening to leave the decision to his successor.

Two aides to a leading presidential candidate, Abdullah Abdullah, were gunned down by assailants outside a campaign office in the western city of Herat on Saturday, underscoring the tenuous security situation as NATO prepares to withdraw all combat troops by the end of the year and the Afghan government takes the lead in the military and political fight against a resilient insurgency.

For a few residents of Kabul who gathered in a small shop on Sunday, security and economic opportunity are top priorities.

“Everyone says they want to build Afghanistan. But right now, Afghanistan needs security, peace and economic growth,” said Talha Hairan, the 22-year-old owner of the shop. “We need specific agendas.”

Fully attaining such lofty goals has proved elusive for both the Afghan government and the NATO coalition, and Hairan said he’s tired of unfulfilled promises.

“In the past, politicians always promised new things, but nothing happened,” he said.

Sardar Wali, who stopped by to purchase a few odds and ends from Hairan, agreed.

“Many promises have gone unfulfilled,” he lamented, adding that he’s looking for a candidate who will bring better things for Afghanistan and Islam.

A former foreign minister under Karzai, who later fell out with him, Abdullah Abdullah ran for president in 2009, but dropped out after allegations that the vote was rigged in Karzai’s favor. United Nations officials at the time said there was evidence of “widespread fraud.”

Noor Mohammad Noor, a spokesman for Afghanistan’s Independent Election Commission, called on all the candidates to respect the wide range of election rules and regulations that govern things like how much each campaign can spend, and the use of government resources for political purposes.

For Hairan and Wali, however, the larger fear this time is that foreign governments like neighboring Pakistan and Iran, as well as the United States, will interfere.

“If there is corruption it will come from abroad,” Wali said.

In a recently published memoir, former U.S. Secretary of Defense Robert Gates accused U.S. diplomats of working behind the scenes to support opponents who might defeat Karzai in the 2009 election, which Gates referred to as a “clumsy and failed putsch.” A spokeswoman for the U.S. National Security Council denied Gates’ allegations as “categorically false,” in a statement to The Guardian last month.

Afghan authorities are in charge of the election process. Apparently to allay fears of outside influence, U.S. officials confirmed last week that they had canceled funding that had been provided for opinion polling in the run up to the election.

The candidates range from Abdul Rab Rasoul Sayyaf, whose connections to jihadists have caused controversy, to Ashraf Ghani Ahmadzai, a former finance minister who also ran in 2009. Other top contenders include Abdullah; the president’s businessman brother, Qayyum Karzai; as well as another former finance minister, Zalmai Rassoul.

Faiz Mohammad Zaland, a spokesman for Ahmadzai, said his candidate’s campaign will seek to take advantage of the new communications technology that has proliferated since the fall of the Taliban.

“During the campaign, our main focus will be on the information technology,” he told Stars and Stripes. “Whether it is social media, or voicemails, text messages — we want to reach as many people as we can.”

Zaland acknowledged that the election will face security threats, just as Afghans face such risks every day. But he vowed that the campaign would move forward despite any menace posed by continued fighting or attacks.

Election commission representatives met with officials from the Defense and Interior ministries, as well as the domestic intelligence agency on Saturday to discuss security for candidates, their staffs and polling places, according to commission spokesman Noor.

“They have assured us that they will help to strengthen security for the election,” he told Stripes.

“There are definitely threats to the elections, because the Taliban see them as illegitimate,” said Hairan, the young shopkeeper. “But I don’t worry about that. When the time comes, I will vote.”