As Camp Howze closing nears, many historical items are being preserved 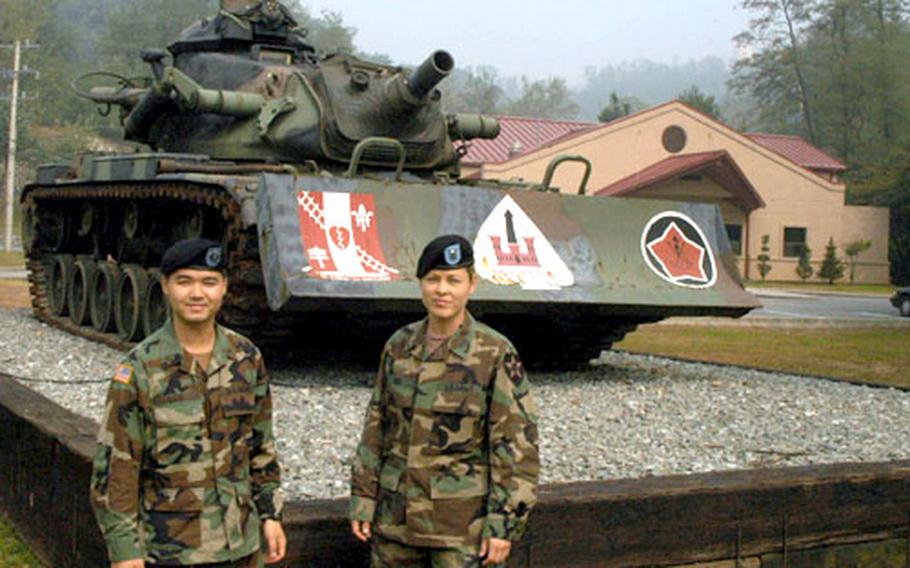 2nd Infantry Division officials discuss the future of a pagoda at Camp Howze, South Korea, that predates the U.S. Army’s occupation of the base. While the pagoda will remain, officials plan to move several other historic pieces from Howze and five other Western Corridor bases that will close in the coming months to other 2nd Infantry Division locations across South Korea. (Seth Robson / S&S) 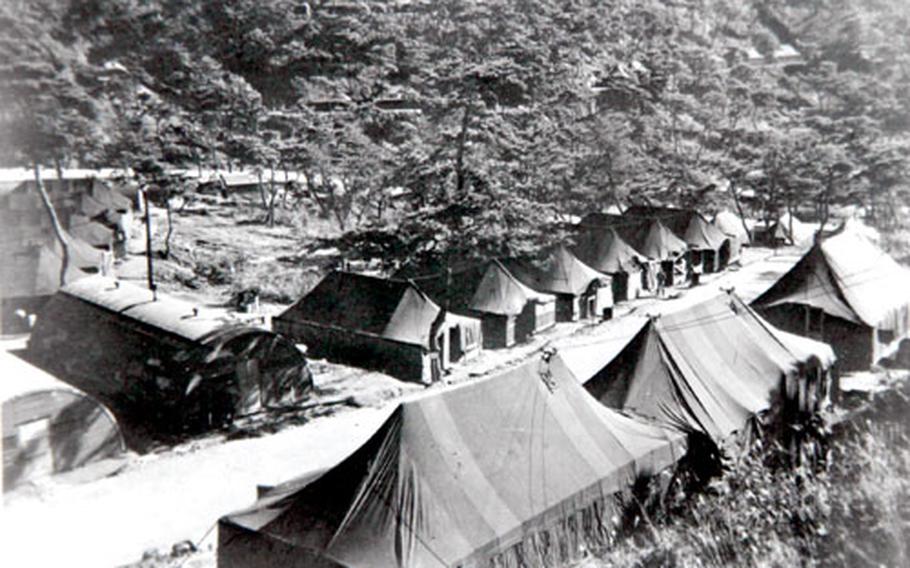 Marines slept in tents when Camp Howze was occupied by the 1st Marine Division at the end of the Korean War. (S&S file photo)

Editor&#8217;s note: This is the first in an occasional series on U.S. bases in South Korea closing this year.

CAMP HOWZE, South Korea &#8212; The 2nd Infantry Division is preparing to move numerous items of historical interest from bases along the Demilitarized Zone slated to close over the next few months.

Last week, 2nd ID officials visited Camp Howze, one of six &#8220;Western Corridor&#8221; bases set to close. The bases, which also include camps Greaves, Edwards, Garry Owens, Giant and Stanton, are closing after negotiations with the South Korean government, and already are largely bare due to the departure of more than 3,600 2nd Brigade soldiers to Iraq in August.

The officials, who visited Camp Howze last week, found it mostly empty, but plenty of reminders of its past remained to preserve, including hundreds of exotic trees planted by soldiers who served at the base.

Many of the trees include plaques dedicating them to particular soldiers. Officials plan to remove the plaques and may even move some of the trees to other 2nd ID facilities. However, moving trees is a tricky business that can be done only at certain times of the year, officials said.

Trees filled the valley where Camp Howze stands even before the U.S. military arrived, according to 2nd ID historical records. The valley was a farm, owned by the Cho family before the Korean War, and the trees there somehow survived the bombing that devastated much of the surrounding landscape, the records state.

A small pagoda that was there before the U.S. Army arrived still stands next to a natural spring, named Matt&#8217;s Marina in honor of former 2nd ID commander Salve H. Matheson (1969-1970). The pagoda has been maintained over the years and will be left behind when the soldiers go, officials said.

Flagpoles and an Engineers Brigade castle stand where the Cho family villa used to be. The villa was relocated when the Army took over the land, the 2nd ID records state.

Some of the buildings at the base, such as the Quonset hut that serves as a chaplain&#8217;s office, were constructed by its first inhabitants, soldiers from the 1st Marine Division, which moved its headquarters there in the spring of 1953.

Other Quonset huts at Camp Howze were built by the 24th Division, which occupied the base from 1955 to 1957. During that time, all of the tents that served as barracks for the first soldiers at the base were replaced by Quonset huts.

Camp Howze was named after Medal of Honor recipient Maj. Gen. Robert L. Howze &#8212; the first commander of the 1st Cavalry Division, which occupied the base from 1957.

2nd ID&#8217;s headquarters remained at Camp Howze until 1971, when it was moved to Camp Casey with the departure of the 7th Infantry Division from South Korea.

Camp Howze was featured prominently in a Larry Bond novel called Red Phoenix, a techno- thriller about a second Korean war. In the novel, North Korea takes advantage of civil unrest in South Korea with a rapid, well-planned massive invasion. The Americans and the South Koreans, caught off guard, suffer heavy casualties early but manage to pull off some brilliant tactics later on.

Today, modern buildings have replaced many of the old Quonset huts at Camp Howze. The base includes a small-arms range, theater, softball complex, library, gymnasium, commissary, community activity center, restaurant, food court and a mini-mall. All the facilities have been operating with limited hours since the 44th Engineers Battalion left for Iraq.

One of the few soldiers remaining at Camp Howze is Sgt. Maj. Herbert Maison of the 2nd ID Engineers Brigade, which shared the camp with the 44th Engineers Battalion before it deployed to Iraq with 2nd Brigade.

When the 44th was at Howze, almost 700 personnel were based there. But their departure has cut numbers significantly, Maison said. The older buildings at Howze mostly are used for storage. Most of the barracks at Howze are of a high standard, he said.

&#8220;The barracks are some of the best in Korea. Other soldiers who come here on details say the barracks here are better than the barracks they came from,&#8221; Maison said.

Camp Howze is one of the best places to serve in South Korea, he said.

&#8220;It is on a hillside. There are only two directions &#8212; up and down. You get a lot of comments from visitors about how peaceful it is with all the trees. You can hear the crickets. It is a very pleasant environment to live in,&#8221; he said.