As another round of forces pour in, Camp Udairi offers new amenities 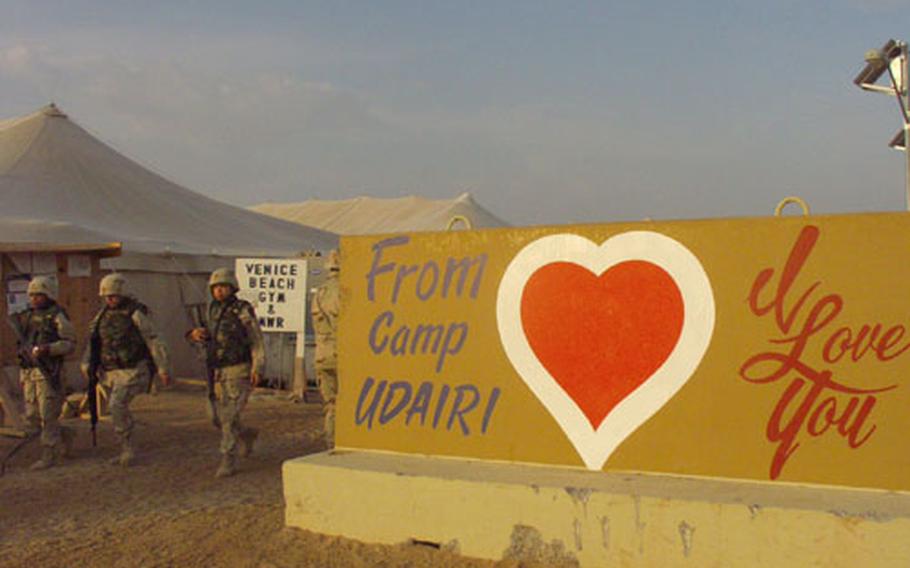 Some soldiers who passed through Camp Udairi last year love it better this year because of all the new MWR facilities, including a well-equipped gym, a commercial telephone center, an Internet cafe, and a movie tent. (Steve Liewer / S&S)

That&#8217;s the soldiers&#8217; lowdown on Camp Udairi, the aviation outpost in northern Kuwait that serves as the main springboard for U.S. troops heading to Iraq. The first soldiers poured in about 13 months ago, even before construction workers had finished paving the helicopter runway.

Now, as Germany-based soldiers from the 1st Infantry Division pack the camp&#8217;s tents this week, the boom-or-bust camp is experiencing its second consecutive February troop buildup.

A year ago, soldiers from the 3rd Infantry and 101st Airborne divisions joined Europe-based troops from the 11th Aviation Regiment and the 12th Aviation Brigade to fill Udairi and the neighboring camps Pennsylvania, New Jersey and New York. Then Udairi offered no amenities except a chow hall and a post exchange. A few trucks traveled up and down a single hardpan road along the camp&#8217;s north-south axis.

Along that road, now named Eisenhower Drive, are most of the soldiers&#8217; tent pads. A tiny Burger King, Subway sandwich shop, barber shop and tailor shop sit near the PX at the center of camp. Across the street is a Morale, Welfare and Recreation hub featuring a gym, phone center, Internet cafe and game room.

The biggest changes, though, have occurred along the fringes of the camp, where most soldiers rarely venture. Construction trucks are everywhere. Near the airstrip is a sea of modular buildings, home to the army of private workers from Kellogg Brown & Root, who largely run the facility.

The 16 tent pads &#8212; up from six a year ago &#8212; can hold up to 13,700 soldiers, said Sgt. 1st Class Javier Barbosa, 38, of Brownsville, Texas, a camp administrator. All have electricity and climate-control units, a big change from last year. Soldiers still use plastic outhouses, though they do have indoor sinks and showers in portable units.

Barbosa said the camp is run by a Texas Army Reserve unit, the 467th Quartermaster Battalion, which took over operation of Camps Udairi and New York last April. (Camps New Jersey and Pennsylvania have been abandoned.)

Their 33 members do their best to keep the place in running order and keep up with all the units as they come and go, usually for stays of one week or less as they head to or from Iraq.

Great or not, the consensus among Udairi&#8217;s second-time visitors is that the camp has come a long way.