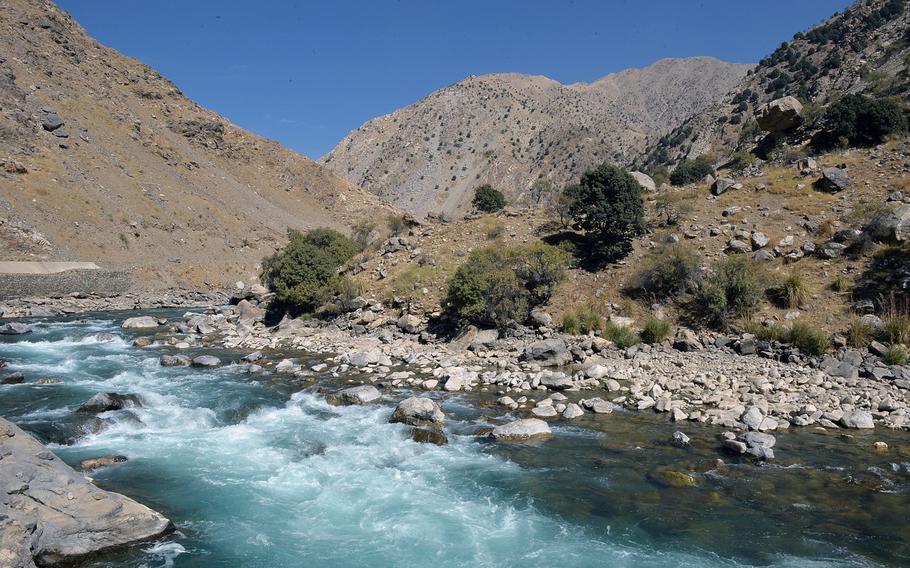 The Panjshir River, pictured here on Oct. 13, 2016, runs through the Panjshir Valley, one of the most secure areas of Afghanistan, where the last attack several residents could remember was more than two years earlier at a checkpoint at the valley entrance. (Chad Garland/Stars and Stripes)

The Panjshir River, pictured here on Oct. 13, 2016, runs through the Panjshir Valley, one of the most secure areas of Afghanistan, where the last attack several residents could remember was more than two years earlier at a checkpoint at the valley entrance. (Chad Garland/Stars and Stripes) 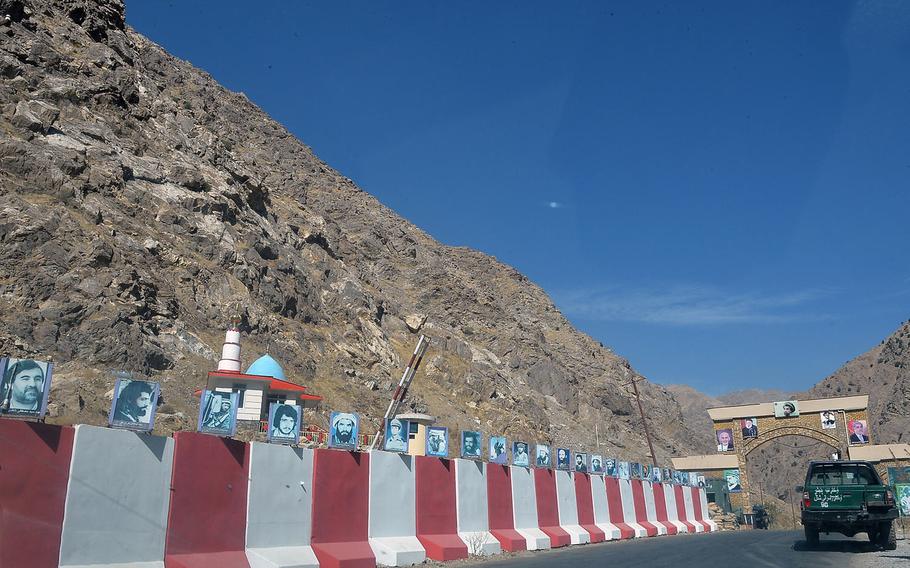 Photos of Panjshiri 'martyrs' killed in Afghanistan's nearly four decades of war line the blast walls near the entrance to the Panjshir Valley, pictured here on Oct. 13, 2016. The valley has been a bastion of resistance to the Taliban since the Islamist group took over the Afghan government in 1996. (Chad Garland/Stars and Stripes) 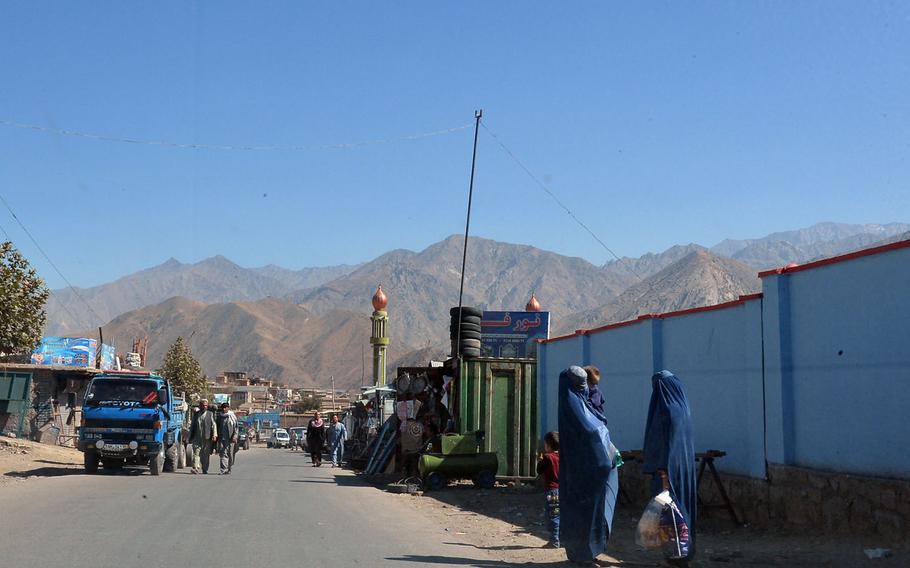 Burka-clad women stand and chat alongside a road through the Panjshir Valley in central Afghanistan on Oct. 13, 2016. (Chad Garland/Stars and Stripes) 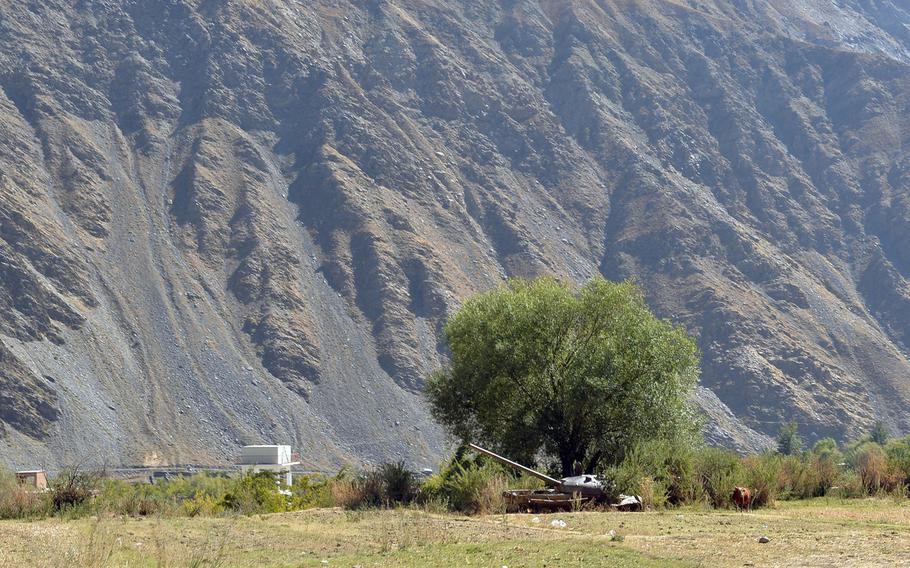 A cow grazes near a Soviet tank, one of many derelict pieces of military hardware littering the now-peaceful Panjshir Valley in central Afghanistan on Oct. 13, 2016. The valley was a guerilla stronghold during the Soviet invasion of Afghanistan in the 1980s. (Chad Garland/Stars and Stripes) 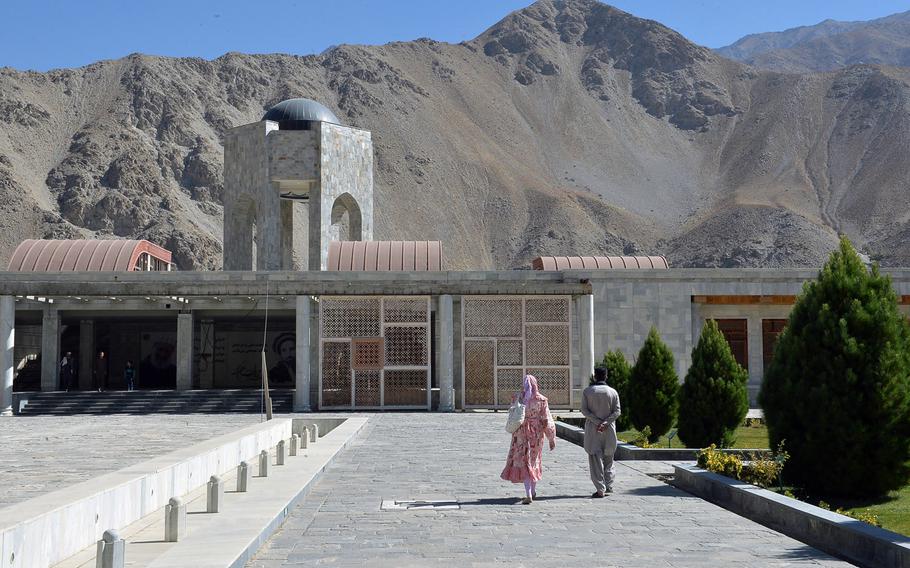 Visitors stroll along the gardens near the tomb of Ahmad Shah Massoud, an Afghan military fighter known as the 'Lion of Panjshir' who battled the Soviets and the Taliban, near the town of Bazarak in Panjshir Valley on Oct. 13, 2016. Massoud was assassinated in 2001, days before the Sept. 11 attacks in the United States. The monument surrounding his tomb, which includes gardens and fountains, is not yet complete. (Chad Garland/Stars and Stripes) 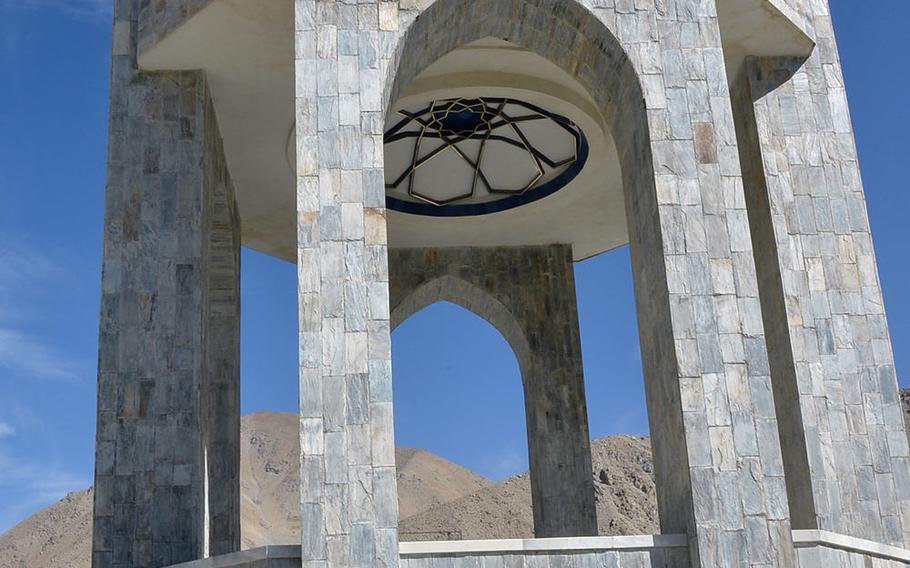 A young girl enters the tomb of Ahmad Shah Massoud, a military leader known as the 'Lion of Panjshir' on Oct. 13, 2016. Massoud, who fought both the Soviets in the 1980s and the Taliban in the 1990s, was assassinated days before the Sept. 11, 2001, attacks in the United States. (Chad Garland/Stars and Stripes) 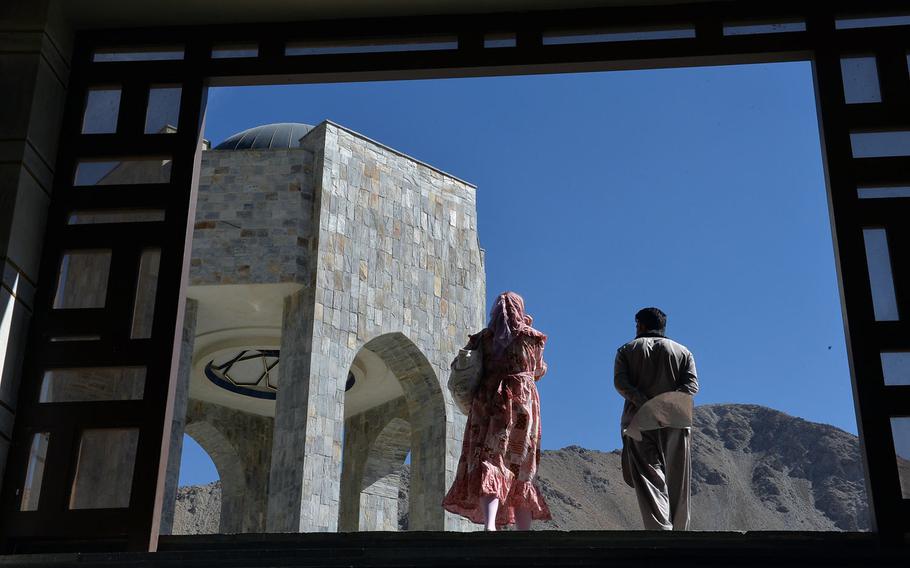 Visitors approach the tomb of Ahmad Shah Massoud near the town of Bazarak in central Afghanistan's Panjshir Valley on Oct. 13, 2016. (Chad Garland/Stars and Stripes) 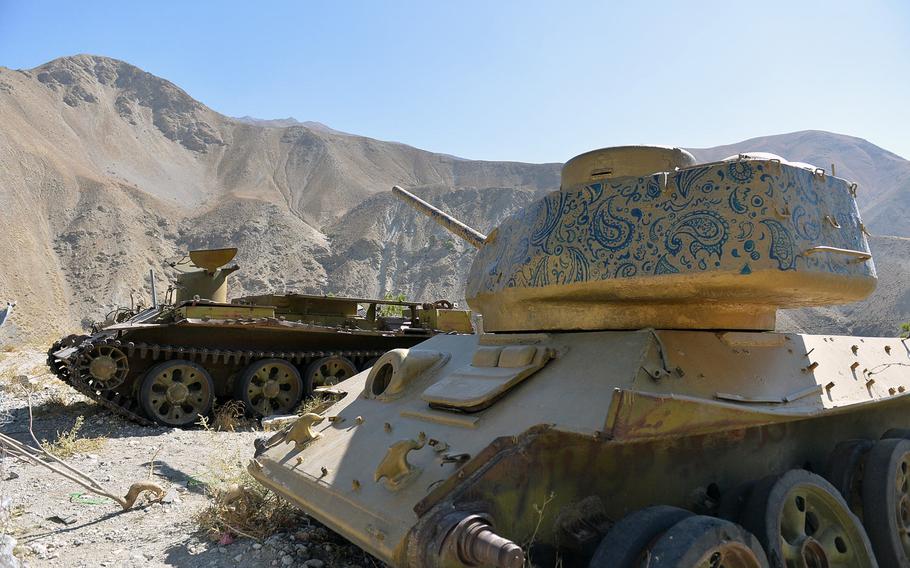 A derelict tank, pictured here on Oct. 13, 2016, has been painted gold and its turret decorated with blue paisley designs on a hilltop where Afghan mujahedeen leader Ahmed Shah Massoud is entombed near the town of Bazarak. (Chad Garland/Stars and Stripes) 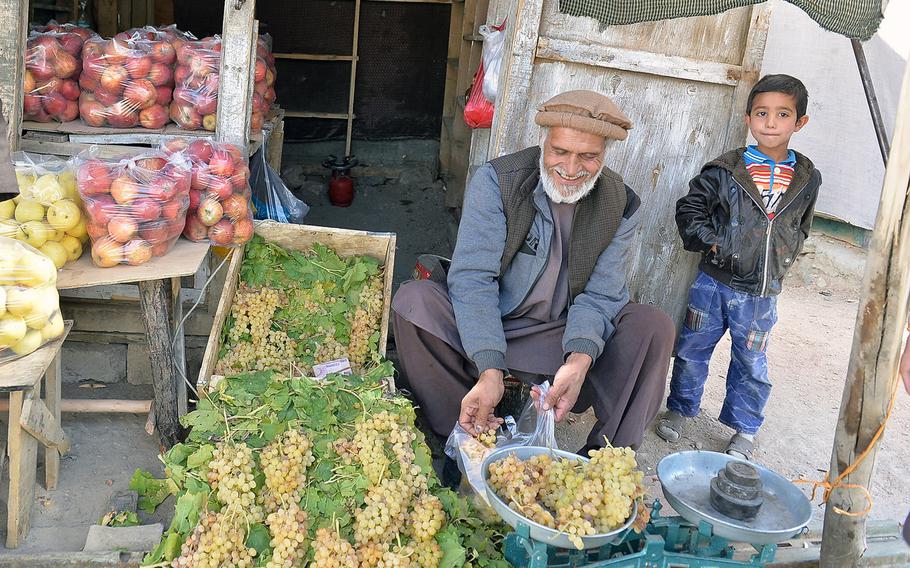 Panjshir Valley resident Abdul Ghani is pictured on Oct. 13, 2016, at his fruit stand in the town of Bazarak. He said the valley remains secure, but the people of the area are alert to violence elsewhere in the country, which they fear could arrive in their villages, too. (Chad Garland/Stars and Stripes) 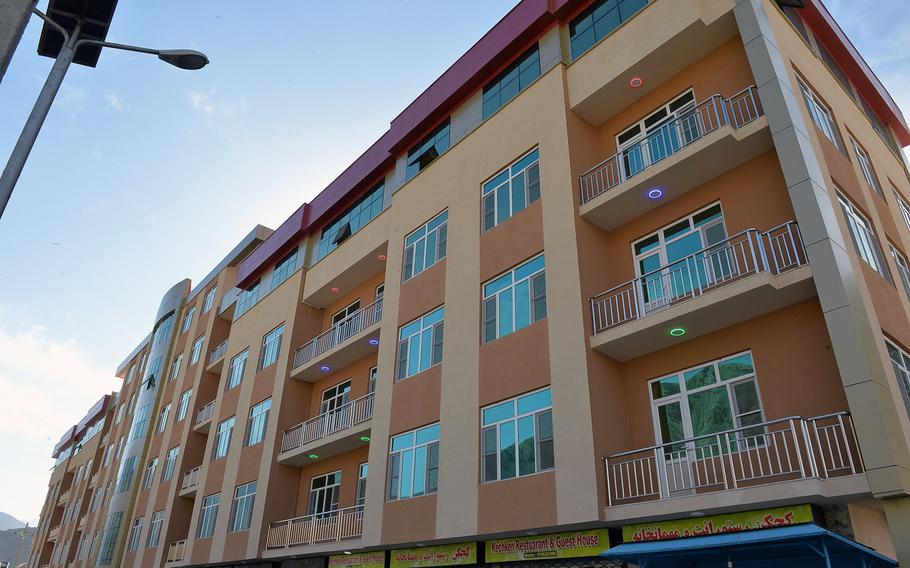 A sign of the security in the Panjshir Valley, the Kechken Restaurant and Guest House in the town of Parakh is pictured here on Oct. 13, 2016 soon before it was set to open. Owner Nazir Ahmad Khalil said it has areas to host parties and conferences as well as 20 four-bedroom suites for tourists who visit the province from around the country. (Chad Garland/Stars and Stripes) 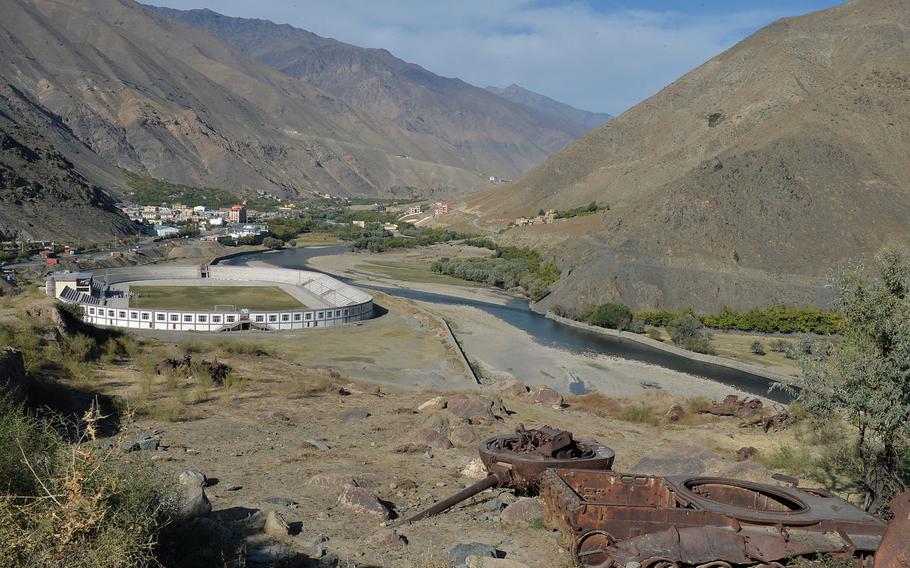 A destroyed tank rusts on a hillside overlooking the Panjshir Valley town of Parakh on Oct. 13, 2016. (Chad Garland/Stars and Stripes) 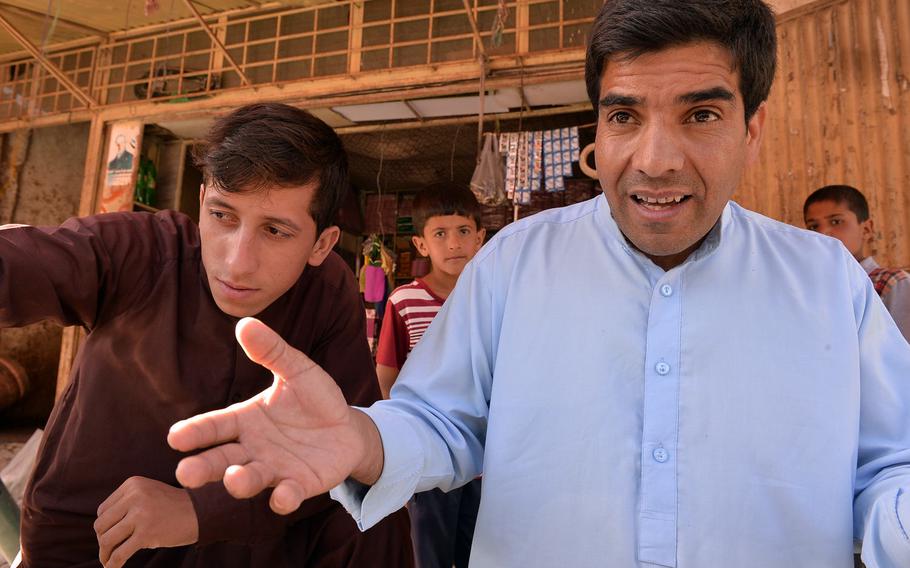 Burhanudin, a school teacher in the Panjshir Valley village of Bakhshi Khail, pictured here on Oct. 13, 2016, at a roadside stand, said though the valley is peaceful, insecurity elsewhere in Afghanistan makes life more difficult because it increases the cost of goods villagers rely on from outside the enclave. (Chad Garland/Stars and Stripes) 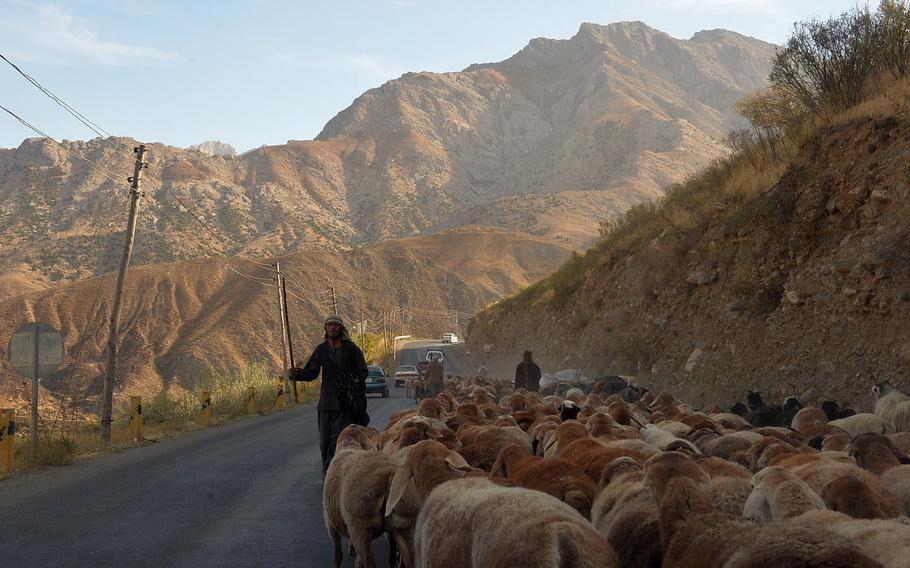 Men herd goats along the road through the Panjshir Valley on Oct. 13, 2016. (Chad Garland/Stars and Stripes)

PANJSHIR, Afghanistan — The Panjshir Valley, about 50 miles north of Kabul, has been one of the safest places in this country. But a growing number of inhabitants fear the Taliban’s recent resurgence could bring violence to their quiet region.

On a clear October afternoon, several foreign tourists roamed the grounds of the tomb of Ahmad Shah Massoud, whose brave fighting against the Soviets earned him the nickname “the Lion of Panjshir.”

The stone monument towers among the rugged mountains surrounding the valley, which provide a natural defense. The tourists’ presence — a rarity in most parts of the country — highlights Panjshir’s unusual serenity.

Massoud, who was assassinated by al-Qaida in 2001, is considered a hero by many Afghans, and he is especially revered here. In the 1990s, he led a successful resistance against the Pashtun-dominated Taliban that prevented the insurgents from ever controlling the valley, populated mostly by ethnic Tajiks; during the 1980s, he and local fighters kept the Soviets at bay, withstanding assaults by tanks, helicopters and strategic bombers.

Since a U.S.-led invasion removed the Taliban from power in Kabul shortly after Massoud’s death, Panjshir has been a bastion of peace.

“We are peaceful here, but the security all around the country is getting worse, and if things get really bad, it could have a security impact on Panjshir, too,” said Burhanudin, 31, in the sleepy village of Bakhshikhail. Like many Afghans he uses just one name.

Taliban insurgents, who are attempting to overthrow Afghanistan’s U.S.-backed government and expel foreign forces, are said to control more territory now than at any time since 2001. The group is threatening six of the country’s provincial capitals, including Pul-e-Khumri in Baghlan province, which shares a long border with Panjshir.

Last month, the insurgents recaptured areas of Afghanistan’s fifth-largest city, Kunduz — roughly 100 miles northwest of Panjshir — for several days, a repeat of a similar attack last year. Fighting in that province continues. Last week, at least two dozen civilians were reported killed in an operation against the Taliban that included U.S. airstrikes.

“We listen to the news on the radio every day about the war out there,” said Abdul Ghani, 54, a fruit seller in Panjshir’s capital, Bazarak, who is not related to Afghan President Ashraf Ghani. “If there is fighting in Kunduz we get alarmed that they might cross the border here. Everyone on Panjshir’s borders is especially alert.”

Feelings of insecurity are growing across Afghanistan. The Asia Foundation found that in 2015 more than 67 percent of citizens nationwide feared for their personal safety, the highest level since the survey began in 2004 and a 2-percentage-point increase from 2014.

By contrast, Panjshiris as a group were less apt to express such fear, with only 7 percent of respondents saying they did so in 2015. The level was the lowest of all of Afghanistan’s 34 provinces, though it represented an increase of 6 percentage points from the previous year.

The growing sense of insecurity coincides with a shift by international troops from a combat mission to one focused from 2015 on training and assistance. In the first eight months of this year alone, more than 5,500 Afghan security forces have been killed the war, according to the Special Inspector General of Afghanistan Reconstruction.

The rising casualty rate is being felt in Panjshir, where many locals work for the military, police force or intelligence service. The bodies of Panjshiris supporting the government in other areas have been returning home in greater numbers.

“Many (Panjshiris) are getting killed because of the war,” said Abdul Hakim, 35, from Unaaba district, whose 28-year-old brother, Ahmed, was killed about two years ago while fighting for the Afghan army in Kunar province, just weeks after getting married.

“We were all in a deep nightmare after we got the news he was killed,” Hakim said. “We are happy that people in Panjshir have lived and slept in peace so far, but now, after the withdrawal of the foreign forces, the security is getting worse day by day.”

The last major Taliban attack in Panjshir occurred in May 2014 at a border crossing and killed 15 people, according to the U.N. mission in the country. Hakim is convinced the insurgents would increase their assaults in Panjshir if they got the chance.

“One of the reasons people are worried here is that we actively fought the Taliban during their regime, and if they get stronger, we will be the people who will suffer more,” he said.

Many Panjshiris appear to blame Afghanistan’s national unity government, brokered by the United States in 2014 after disputed presidential elections, for the country’s deteriorating security situation and their rising fears.

Under that deal, Ghani became president and his election rival, Abdullah Abdullah, became chief executive. Abdullah, though born near Kabul, spent a significant part of his life in Panjshir, where he became an adviser to and close friend of Ahmad Shah Massoud.

Support for Abdullah in Panjshir has been historically high, but even people in his adopted home have begun to criticize him and Ghani for their well-publicized feuds, which have prevented the government from functioning effectively. The discord is hurting the economy, undermining security and fueling ethnic tensions at a time when a united front against a stronger Taliban is greatly needed, said Shahla Farid, a political scientist at Kabul University.

“I think the criticism particularly by people in Panjshir is because they are frustrated; they didn’t get what they wanted,” Farid said.

Nasir Ahmed Khalil, a restaurant owner in the village of Parakh, said peace would come quickly if Ghani and Abdullah would work together to unite the country.

“Now our government has strong support from the United States and NATO, but weaker policies by our central government have made us unable to defend our cities from a few Taliban fighters,” Khalil said. “With so much strong support, if you had stronger policies it would be very easy to bring peace to the country.”

Instead, Khalil said, he and his fellow Panjshiris must remain vigilant. But unlike some of his neighbors, he is confident that if violence does come here, it won’t last long.

“If the government is not able to defend this province, I think the people have the capacity to do it themselves,” he said. “In the past, when this area was invaded, the people of this province defended it. We did it by ourselves and we can do it again in the future.”