As Afghan mission changes, loaders at Bagram get into the sling of things 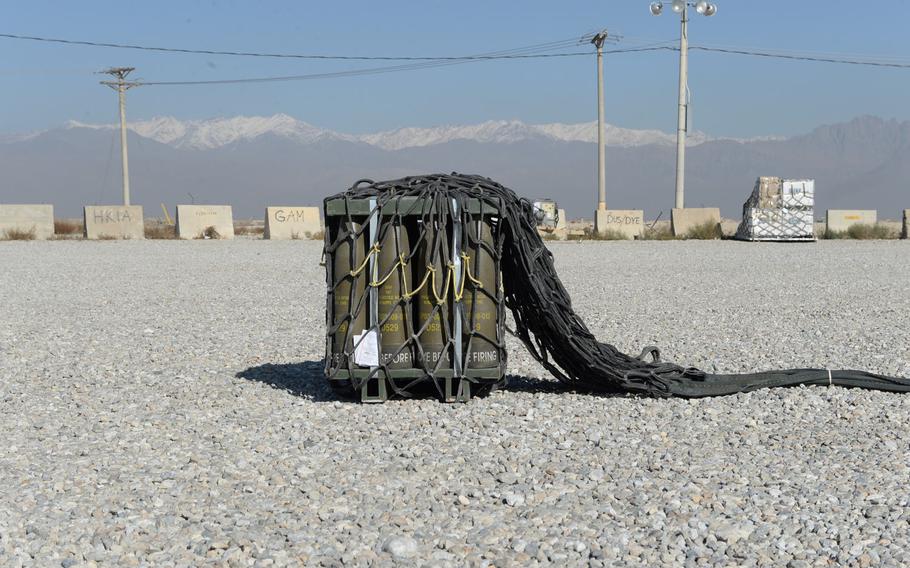 Rigged ammunition sits at the sling load yard at Bagram Air Field on Dec. 5, 2016. It's one of a number of essential items routinely sling loaded and transported to smaller bases in Afghanistan that lack airfields. (Phillip Walter Wellman/Stars and Stripes )

Rigged ammunition sits at the sling load yard at Bagram Air Field on Dec. 5, 2016. It's one of a number of essential items routinely sling loaded and transported to smaller bases in Afghanistan that lack airfields. (Phillip Walter Wellman/Stars and Stripes ) 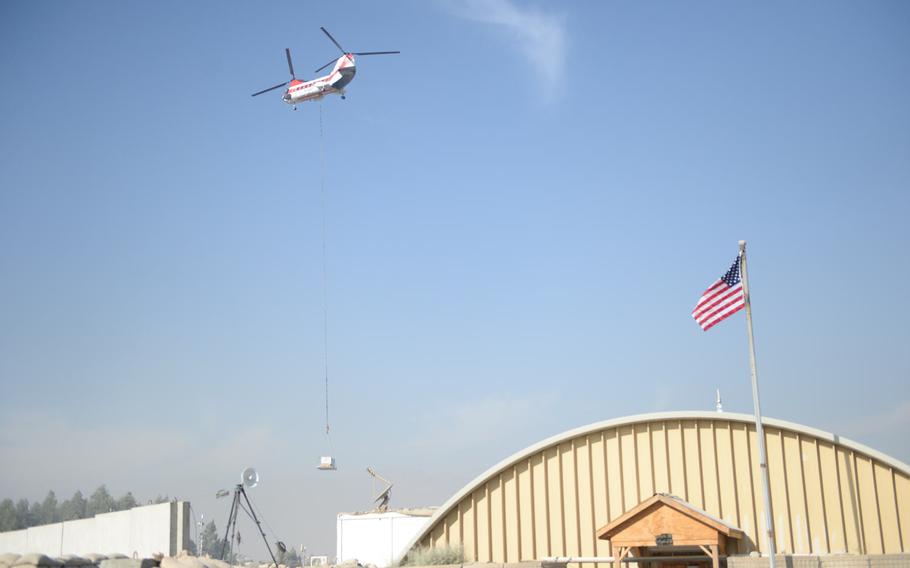 Cargo sling loaded at Bagram Air Field arrives at Forward Operating Base Gamberi near the eastern city of Jalalabad, Afghanistan, Dec. 6, 2016. Because it does not have an airfield, many essential supplies are delivered to Gamberi this way. (Phillip Walter Wellman/Stars and Stripes ) 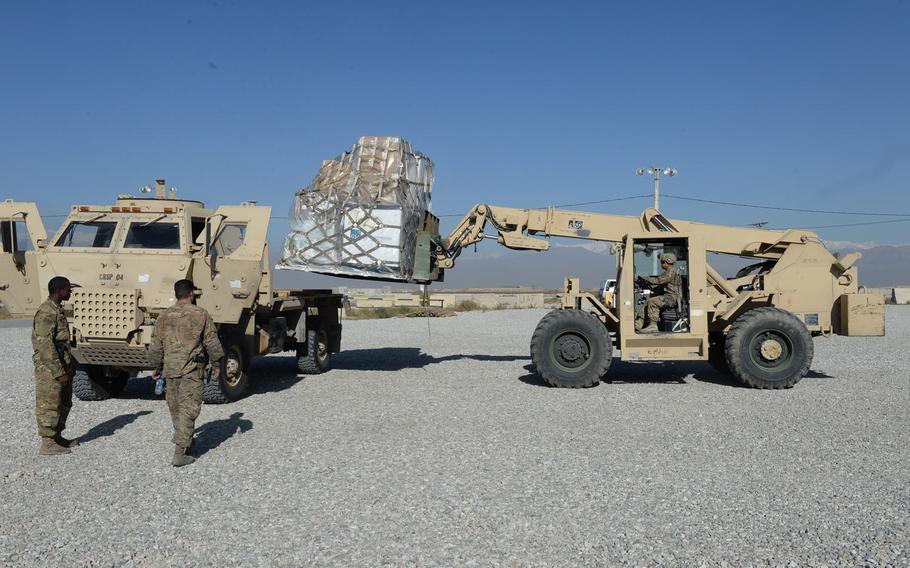 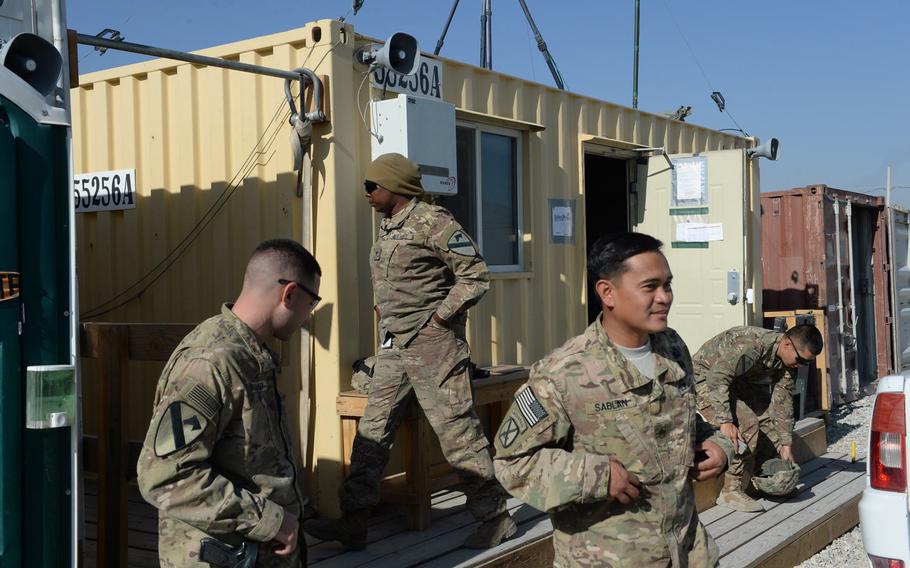 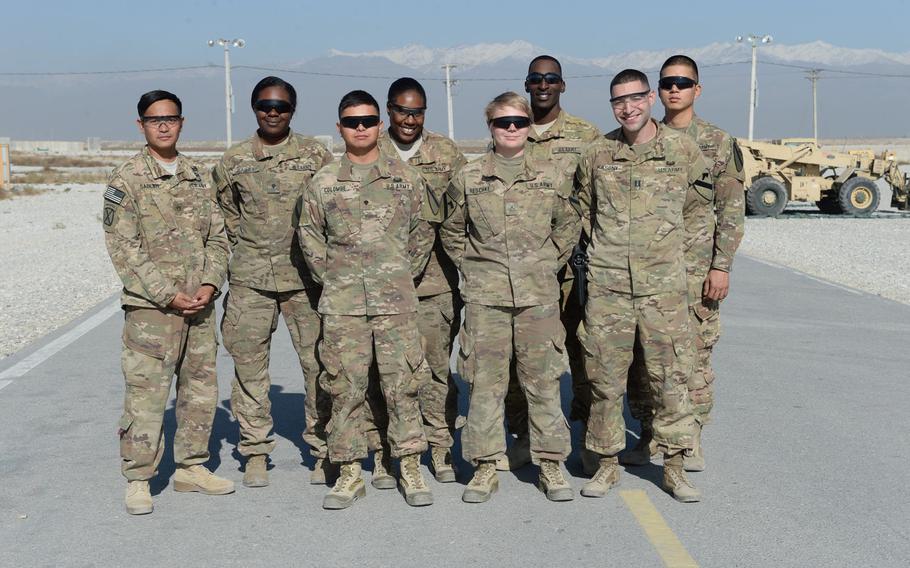 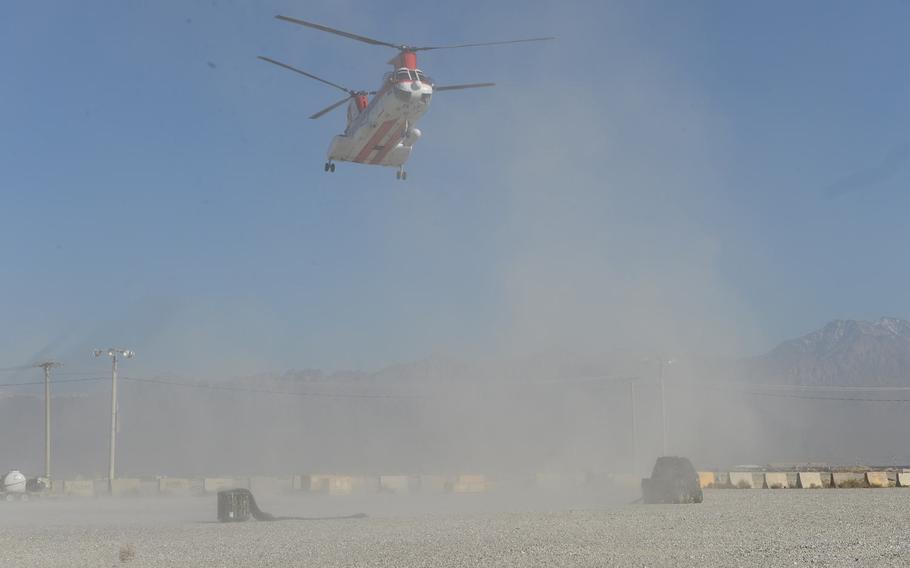 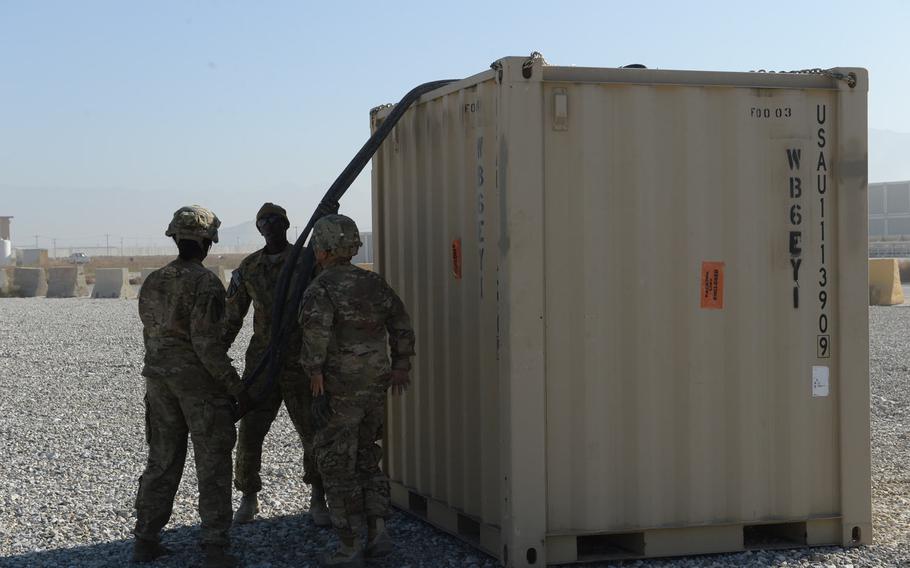 Three U.S. servicemembers attach a cable to a nearly 5,000-pound piece of cargo at Bagram Air Field on Dec. 5, 2016. The loaders attach cargo to helicopters for shipment to smaller bases in central and eastern Afghanistan. (Phillip Walter Wellman/Stars and Stripes) After being connected to a piece of cargo with a 250-foot cable, a helicopter begins its ascent at Bagram Air Field on Dec. 5, 2016. The helicopter will move the cargo to another base in Afghanistan. (Phillip Walter Wellman/Stars and Stripes) BAGRAM AIR FIELD, Afghanistan — On a cold December morning in a remote corner of America’s largest military base in Afghanistan, three U.S. servicemembers attach a 250-foot-long cable to a cargo container. A Chinook helicopter then lifts the payload off the ground and carries it into the distance.

Sling load operations like these, which involve hooking items beneath a helicopter so they can be transported to other sites, are increasing at Bagram Air Field as more U.S. troops are being called to smaller, outlying bases to support Afghan forces in fighting a resurgent Taliban. Those bases, many of which don’t have airfields, need supplies that can be transported only by helicopter or via dangerous land routes.

The increase, officials say, is a sign of the changing nature of America’s mission. Because of concerns about the renewed strength of militant groups, President Barack Obama slowed the planned drawdown earlier this year and gave U.S. military commanders more freedom to launch airstrikes in support of Afghan forces.

While U.S. forces in the recent past were retrieving suplies from outlying bases in preparation for the drawdown, now they are moving them back out.

“A couple (of) years ago, it was about us bringing things back in,” said Army Capt. Brendan Kasony, aerial delivery officer for the 1st Cavalry Division Resolute Support Sustainment Brigade.

“Things have changed since then; I believe it is starting to build back up,” he continued. “We are placing units in outlying (forward operating bases) now, with many more units located in numerous locations. Just last week we moved 220,000 pounds and did 74 sling loads alone.”

An eight-member team, comprising troops from the 1st Cavalry Division, is responsible for all of the sling loading at Bagram. They assumed responsibility in September and will stay until June.

“Operations have only increased since we came here,” said Kasony, who oversees the Bagram team along with a smaller, four-man detachment in southern Kandahar province. “The last (Bagram) detachment, I think, moved a million pounds. We exceeded that over 30 days ago.”

Staff Sgt. Carlo Sablan is the noncommissioned officer in charge of the day-to-day operations of the current Bagram detachment. “It’s busy,” he said as a 4,600-pound shipment of goods ascended into the sky above his head, “but it’s satisfying to know that we are actually benefiting somebody on the other end.”

The items Sablan and the others help move are essential supplies used to sustain more than a dozen smaller bases in central and eastern Afghanistan. Most of those bases don’t have airfields, so if items like food, water, ammunition and repair parts are not transferred by helicopter, they must be moved by land. Such deliveries can take weeks and are susceptible to insurgent attacks.

Yet they are demanding for the choppers, too, because of potential instability caused by the tethered loads and the limits on speed that they impose.

The Taliban have stepped up activity across Afghanistan this year, prompting President Barack Obama in July to grant American military commanders more freedom to strike the insurgents in support of Afghan forces. That same month, Obama announced that he would keep 8,400 U.S. troops in the country until the end of his presidency in January instead of just 5,500, as he originally had planned.

Most U.S. forces in the country are assigned to NATO’s Resolute Support mission, which focuses on training and advising the Afghans. A smaller number of U.S. troops make up America’s separate counterterrorism mission.

Kasony said a “more kinetic battlefield” has created the need for more troops in outlying bases and more sling load operations to sustain them.

The Bagram team spends the entire workday down at the sling load yard. When they aren’t tethering cargo to aircraft, they are rigging cargo — wrapping it in nets and preparing it to be transported.

“A lot of the time we like to prep the loads the day before, so the next day it will just be reinspecting the load and hooking it up,” said Spc. Michael Colombe, 21. But, he said, some cargo, like ammunition, often arrives at the yard shortly before its scheduled departure and can’t be prepared in advance.

“The busiest day, we had 22 loads go up, and a lot of it was just ammo, so a lot of it came the day of, and we had to get on it — get everything rigged up before the birds got here,” Colombe said, referring to the helicopters. “But I love it. I think we’re a big asset to the other bases.”

Officials at the smaller bases have expressed appreciation for the group, whose members are sometimes called away from Bagram to provide sling load support at other locations around eastern Afghanistan.

“It’s very different from what everyone else in our brigade is doing,” said Pfc. Sarah Reschke, 19. “Not only because we’re sling loading, but because we get to be outside and physically working, and away from a lot of higher-ranking people, which is all right.”

Reschke is the youngest member of the detachment. Most of the group’s members have different military occupational specialties.

Spc. Eugene Lee, 24, originally trained to be a cook. “This just came out of nowhere,” he said when describing how he ended up doing sling loading on his first deployment. “But doing the job makes me feel great every day. We have a lot of equipment and supplies we put out.”

Kasony said the group will continue to be busy in the coming months despite the arrival of winter, which is usually accompanied by a lull in many operations across Afghanistan.