As 3/11 anniversary nears, US bases in Japan manage risk of another major quake An aerial view of damage to Sukuiso, Japan, a week after a 9.0-magnitude earthquake and subsequent tsunami devastated the area. (Dylan McCord/U.S. Navy photo)

An aerial view of damage to Sukuiso, Japan, a week after a 9.0-magnitude earthquake and subsequent tsunami devastated the area. (Dylan McCord/U.S. Navy photo) 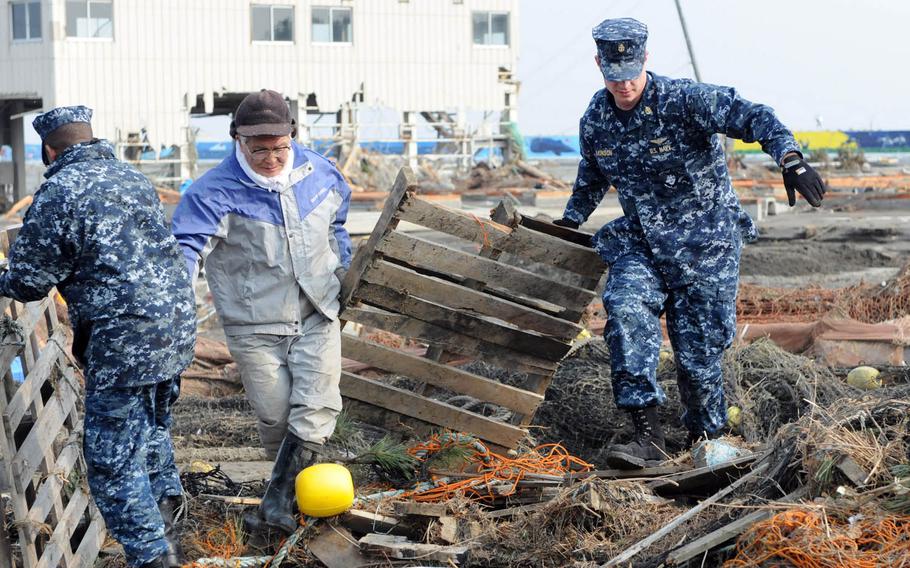 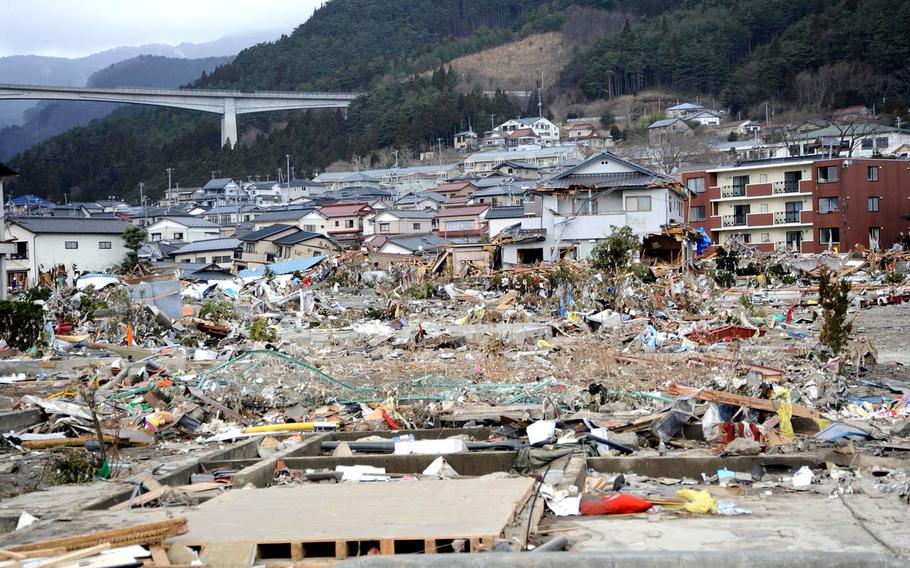 Houses and apartment buildings are seen in Ofunato, Japan, after a 9.0-magnitude earthquake triggered a devastating tsunami that affected the coastal city. (U.S. Navy photo)

YOKOSUKA NAVAL BASE, Japan — Most servicemembers and their families now living in mainland Japan weren’t there on March 11, 2011, when a 9.0-magnitude earthquake combined with a tsunami killed nearly 20,000 people and set off an ongoing nuclear crisis.

Aftershocks in the ensuing months came in the hundreds, with several registering above a 6.0 magnitude.

The passage of time left people with the feeling that current earthquakes, which are an everyday occurrence in Japan, are unrelated.

But oceanographic data show that the sea floor has continued expanding as a result of what happened six years ago — meaning that when the tens of thousands of DOD personnel in mainland Japan feel a tremor, they may be experiencing the faint legacy of the great earthquake in East Japan, also known as Tohoku.

“In that sense, it could be said that the Tohoku earthquake has not ended,” said Naoshi Hirata, a University of Tokyo professor and head of the Earthquake Research Institute Prediction Center. “There are still many evacuees all around Japan, so it has not ended. But it has also not ended as a natural phenomenon.”

Hirata said it is a certainty that a large-scale earthquake will occur sometime in the region encompassing Tokyo and outlying prefectures, where the United States has bases for all four DOD service branches. However, where and when it will happen is unpredictable under current methods, he said.

That certainty is what keeps emergency planners at U.S. bases in the region revising, practicing and planning year-round for a long list of potential emergencies.

If a major natural disaster occurs, each base in Japan will handle communication and safety measures in its own way. But much of what they will do is a result of lessons learned from the Tohoku earthquake.

The military was widely lauded for relief efforts during Operation Tomodachi, when about 24,000 servicemembers joined with the Japan Self-Defense Force in aid operations.

However, first-hand accounts from personnel and family members at some bases during the disaster, as most servicemembers left to assist recovery efforts, reflected fears fueled by a flood of rumor and contradictions.

At Yokosuka, commanders told base personnel they had nothing to fear from ambient radiation levels, comparing them to radiation found in bananas; meanwhile, hospital officials called parents and told them to send their children out of Japan because of radiation.

Messages on television told people to seek higher ground as tsunami warnings continued on March 11. When several people did that by walking up the highest hill on base, a Navy officer told them to go back down, according to multiple accounts at the time.

It’s difficult to say how bases like Yokosuka will respond in the next disaster due to the unpredictability of such events. But improving communication on many fronts has been a priority in recent years, Navy emergency response officials said.

Yokosuka and Ikego are once again upgrading the “giant voice,” a loudspeaker system that sometimes came out garbled and didn’t reach all corners of Yokosuka in 2011.

Officials are also making sure that those using it know what they’re doing, said Sigmund Evans, the Navy’s regional emergency manager.

A system can be perfect, but if someone can’t annunciate and isn’t using the microphone properly, the message may still be misunderstood. Pre-recorded messages may also be used, depending on the nature of the emergency, Evans said.

It allows commands to shift resources such as extra fire trucks or generators from a base on the periphery of a disaster into an area with critical needs.

“Our coordination with [Japanese authorities] has improved a lot,” Evans said.

When personnel report to several bases in Japan, they are given a form to sign up for email emergency alerts at their orientation briefings — though officials acknowledge that some do not for privacy reasons. However, similar messages will be posted online during emergencies. Evans dubbed Facebook and other social media outlets “the first line of defense in rumor control.”

Although the Tohoku earthquake was considered unusually strong, scientists say a weaker earthquake could be even more devastating if it strikes Tokyo.