As 173rd moves, its mission stays the same 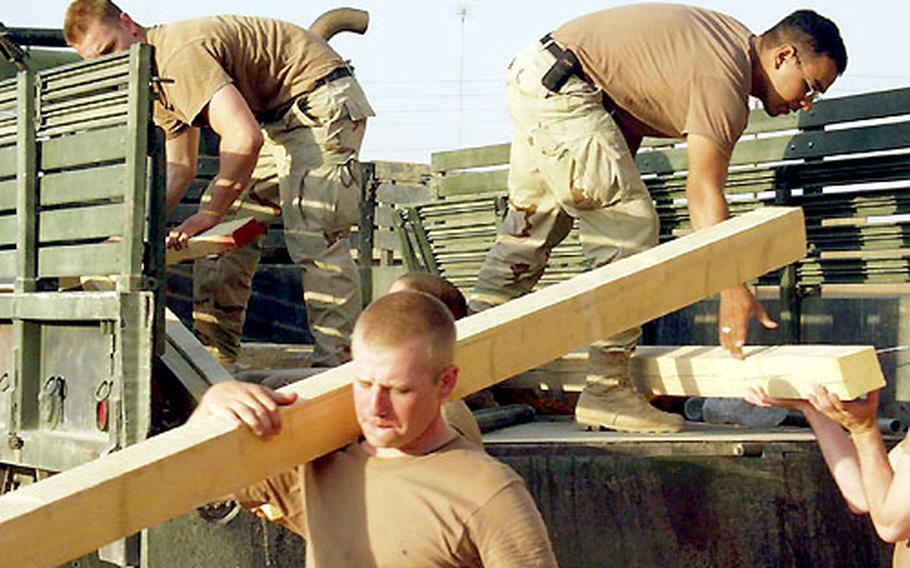 Soldiers assigned to Company A, 1st Battalion, 508th Infantry Regiment keep busy with tasks such as getting material to make their camps more secure. Some of this lumber was going to be used to build an outhouse. (Kent Harris / S&S)

Soldiers assigned to Company A, 1st Battalion, 508th Infantry Regiment keep busy with tasks such as getting material to make their camps more secure. Some of this lumber was going to be used to build an outhouse. (Kent Harris / S&S) Soldiers with the 173rd Airborne Brigade’s Combat Support Company block a road on the outskirts of Kirkuk, Iraq, while experts blow up unexploded ordnance found in the area. (Kent Harris / S&S) This former school for girls in Hawija, Iraq, is now being used as a base by soldiers in Company A, 1st Battalion, 508th Infantry Regiment. (Kent Harris / S&S)

KIRKUK, Iraq &#8212; While the season and the scenery have changed, the 173rd Airborne Brigade&#8217;s mission in Iraq largely has stayed the same: Keep the peace and keep things stable.

After jumping into the country in March, the Vicenza, Italy-based soldiers have gradually made their way south, leaving behind temperate weather and tall grassland to find large cities surrounded by scorching deserts.

The brigade is centered in and around Kirkuk, a city of about 1 million inhabitants. It&#8217;s difficult to tell exactly how many people live in Kirkuk &#8212; or any Iraqi city &#8212; because a census hasn&#8217;t been taken in decades.

Out to the country

The brigade&#8217;s 1st Battalion, 508th Infantry Regiment has moved out of the city and into smaller surrounding villages. Companies in the battalion have turned into vagabonds, establishing compounds, only to then move on to new trouble spots.

Capt. Ned Ritzmann leads Company A, which is headquartered in a former school for girls in the town of Hawija. The school is surrounded by a low wall, creating a compound that&#8217;s big enough to comfortably house the company and its Humvees.

Ritzmann and 1st Sgt. Michael Stribling know at least one person is unhappy that Americans are in town. Someone has targeted them several times by tossing improvised grenades into the compound. No one&#8217;s been seriously injured. But a ring of concertina wire now surrounds the compound.

Stribling isn&#8217;t worried much about a grenade attack now.

&#8220;Good thing this is a soccer country and they all throw like girls,&#8221; he said, smiling. But even an Olympian would have trouble tossing a grenade over the gap that now exists.

Still, grenades aren&#8217;t all that&#8217;s out there. So Stribling directed a group of soldiers to build a wooden support structure near the gate.

Neither Stribling nor the rest of the company will get much sleep this night. Most of the camp is emptied to conduct a pre-dawn raid, although nothing is found. But, Ritzmann said, it showed that his company is still aggressive.

Aggressive, but not overly so, Stribling said.

&#8220;Wear them down with kindness,&#8221; he said, pointing to soldiers returning from a patrol and trading high-fives with some children near the compound gate.

That&#8217;s similar to what Company C is doing in the nearby town of Jar Silah.

There are a lot of commonalities between the two companies. Both live in schools. Both have soldiers acting as carpenters, police officers and whatever else it takes to get the job done.

And both companies don&#8217;t seem to get much sleep.

McDougall is one of the few soldiers awake after the raid with Company A. Most are sleeping.

Staff Sgt. Tim Decoudres and Spc. William Cundiff are two others who are awake. They&#8217;re soon atop the building and watching the perimeter of the base behind their sandbag-protected machine-gun emplacements.

A busy local road is fairly close to the camp &#8212; close enough for someone to take a few long-range shots and quickly get away. Once, a mortar shell came close to hitting the camp.

Just about everything, including a nightly meal from the dining facility, comes to the battalion via convoy from the air base in Kirkuk. One or two convoys, each supported by Humvees and soldiers scanning the largely desolate landscape with hands on weapons, makes the hourlong trip each day.

Several oil refineries are scattered around the countryside. Shepherds try to keep hundreds of sheep from getting too close to the roads. The convoys reach the battalion headquarters, drop off their cargo and turn around.

A few days later, other soldiers assigned to the brigade are blocking off some of the same roads the convoys normally take.

Second Lt. Greg Couturier&#8217;s sapper platoon is part of the Combat Support Company. Today, the mission is to keep traffic away while soldiers blow up unexploded ordnance in the area.

Iraqis seem used to dealing with unexploded ordnance. And most probably wouldn&#8217;t do more than turn their heads while driving by it if Couturier&#8217;s platoon wasn&#8217;t there.

The operation needs to go quickly, though, because items such as the red marker flags and sandbags that are left by themselves quickly disappear.

Most of the brigade&#8217;s support elements are based on the air base outside the city. That&#8217;s also where Mayville&#8217;s headquarters is.

The colonel is quick to spread praise around for those helping his brigade accomplish its missions. There are armored elements from the 1st Infantry Division and 4th Infantry Division. Mayville reports to the 4th ID, which has units all over the north of the country.

An Air Force squadron of A-10 Warthogs and a detachment of Apaches also are based at the airport for close-air support.

The 173rd isn&#8217;t regularly mentioned in media reports, troops said. Only one soldier in the brigade has died since it entered the country. And that was an accident. Others have been seriously wounded in attacks, though, and had to leave the Army.

The only real attention the brigade has received recently was for its role in an incident involving Turkish special forces. A tip lead to the raid of a compound where armed people were reportedly involved in planning to assassinate the mayor of Kirkuk.

Soldiers found armed militants; some of them belonged to the Turkish special forces. After their detention, an international incident ensued, with Turkey lashing out angrily.

He said Turkish liaisons were working with his command even before the incident took place. In fact, keeping Turkey mollified &#8212; and out of Iraq &#8212; was one of the brigade&#8217;s primary missions when it landed in the north of the country. The American presence, it was hoped, would calm the region and keep the Kurdish population from seeking a separate country that Turkey would find threatening.

The area certainly seems relatively calm, especially compared to what&#8217;s going on in and around Baghdad to the south.

That would mean experiencing a few more seasons in Iraq.

As for new scenery, Mayville says he still thinks Kirkuk needs help. But the brigade will go where there&#8217;s work to do.