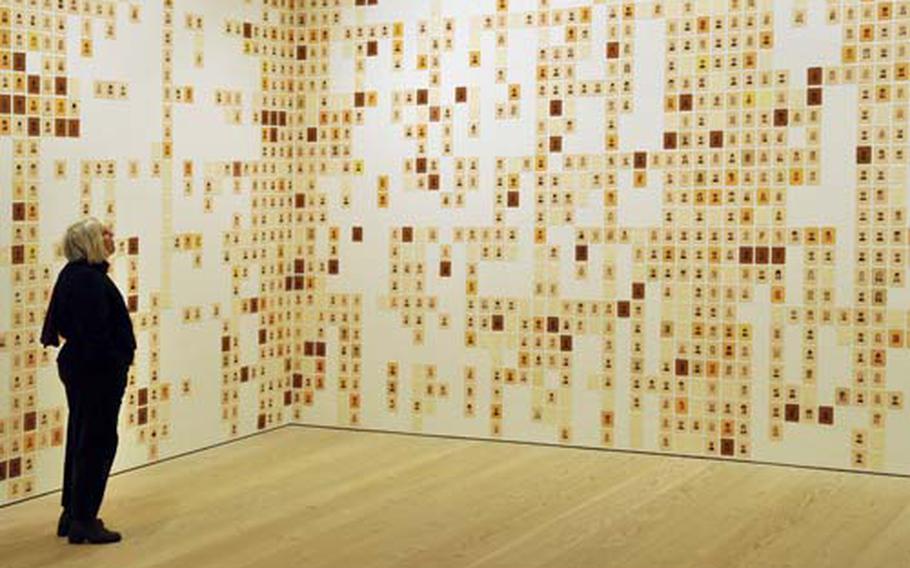 A woman examines one wall of fallen troop portraits at London’s Saatchi Gallery earlier this month. The exhibit runs through May 7. (Geoff Ziezulewicz / S&S)

A woman examines one wall of fallen troop portraits at London’s Saatchi Gallery earlier this month. The exhibit runs through May 7. (Geoff Ziezulewicz / S&S) 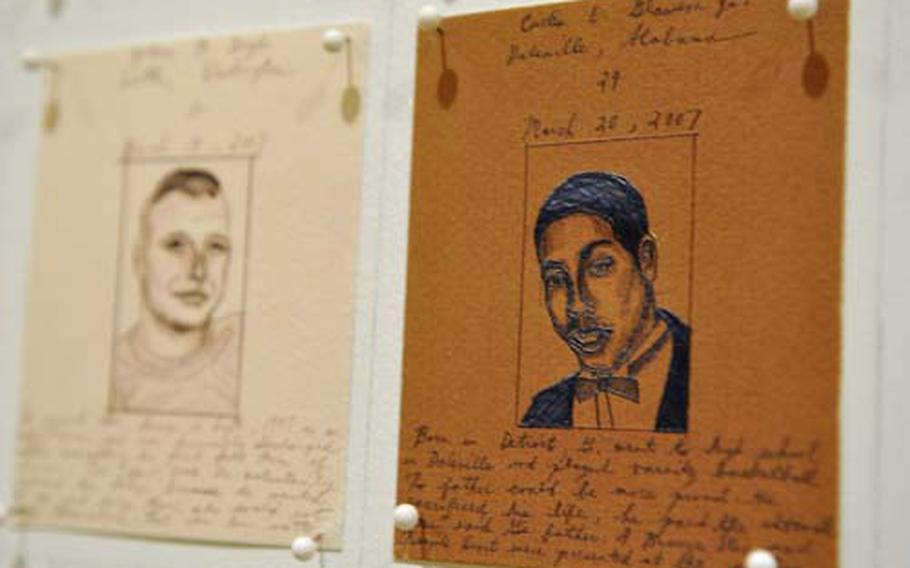 LONDON &#8212; Air Force Master Sgt. Evander E. Andrews was the first to fall in what is now nearing a decade of war for America.

The 36-year-old was killed Oct. 10, 2001, in an accident while building an airstrip in Qatar. Since then, more than 5,000 servicemembers have died in support of the wars in Iraq and Afghanistan.

Even as the deaths ebb and flow over the years, life carries on back home, perhaps too much so.

That disconnect is what troubled artist Emily Prince in late 2004, when the number of war dead rose daily.

&#8220;As a number it was such an abstraction that it had almost no meaning for me,&#8221; Prince said in an e-mail from her home in San Francisco. She felt the need for a more tangible connection to those fallen men and women.

So she started drawing the dead; small, simple portraits of every man and woman who has paid the ultimate price. The effort has culminated in an art exhibit titled &#8220;The American Servicemen & Women Who Have Died in Iraq and Afghanistan (But Not Including the Wounded nor the Iraqis nor the Afghans).&#8221;

The exhibit is on display at London&#8217;s Saatchi Gallery through May 7.

&#8220;I simply felt a personal need to engage more deeply with this information, to find out who these people were who were dying,&#8221; she said.

Each lightly penciled column signifies a week of war, with Andrews occupying his own column at the leftmost part of the exhibit. The portraits become more crowded at points, while spacing out at other times.

Prince, 28, draws the faces on colored pieces of paper that reflect the troop&#8217;s race, offering a military demographic lesson in the process.

At previous displays, Prince organized the fallen portraits based on where the dead were from in the States, but she said the current chronological arrangement gives a better sense of the sheer duration of the wars.

Prince said the exhibit is current through Dec. 1, and that she continues to draw the dead.

For the first year of the project, Prince spent every day catching up. These days she checks a Web site often and draws several portraits a week, usually over the course of a few evenings.

&#8220;When casualties are particularly heavy I have to stop whatever else I was doing and devote the whole day or two to drawing,&#8221; she said.

The portraits are profound in their simplicity: simple sketches with the troop&#8217;s name, age and sometimes a bit of biographical information written in pencil. There is Curtis E. Glawson Jr., 24, killed in March 2007, wearing a tuxedo. There are Marines in their dress blues and soldiers wearing their ballistic eye goggles.

Prince&#8217;s attention to each and every fallen face is apparent in her work, Waldemar Januszczak wrote earlier this month in The London Times.

&#8220;How fiercely Prince battles to find individuality and difference in every single face as she seeks to rescue this innocently smiling cast from the mass grave of statistics,&#8221; Januszczak wrote of the exhibit.

When Prince can&#8217;t find a photo, she writes the troop&#8217;s name, hometown, age and date of death on a card and leaves it blank. She encourages families whose loved one does not have a photo to contact her.

Some families have reached out to her, which she said is gratifying.