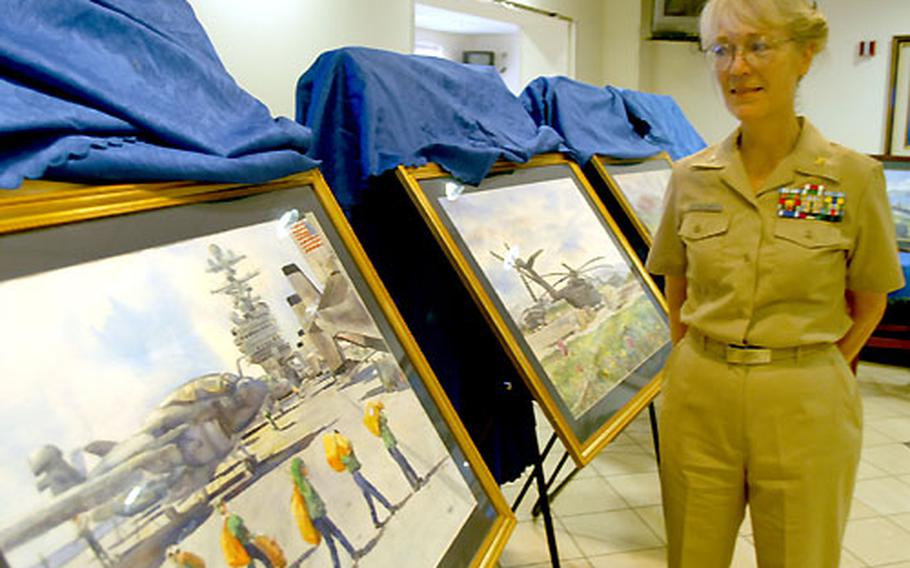 Cmdr. Monica Allen Perin, a reservist, stands with watercolors she was commissioned to paint for the Navy. She is one of a few of the U.S. military’s combat artists. (Kendra Helmer / S&S)

NAPLES, Italy &#8212; Cmdr. Monica Allen Perin documents military life in a rather unusual way. As one of the few military combat artists, she captures images with the stroke of a paintbrush.

&#8220;There are only three of us that I know of,&#8221; said Perin, who unveiled her latest watercolors Wednesday at Capodichino in Naples.

The reservist discovered the Navy Combat Art Program in 1995. She was musing out loud about how to combine her passion for painting and the Navy when a friend told her of the program.

A few months after submitting a portfolio, she was on her way to Sarajevo and Bosnia and Herzegovina, commissioned by the Navy Art Foundation to document female troops.

&#8220;I wanted to see where [the troops] were, I wanted to know where the news was,&#8221; said Perin, whose paintings hang in the Navy Art Gallery and the Pentagon.

To find subjects for her latest series, the Williamsburg, Va., native traveled around the Mediterranean for three weeks. Her favorite painting depicts sailors lugging mail across the flight deck of the aircraft carrier USS Harry S. Truman.

&#8220;Very seldom do we capture it [sailors working] in this kind of medium,&#8221; said Rear Adm. Michael Holmes, commander, Fleet Air Mediterranean, at the unveiling.

When it isn&#8217;t practical to go into the field and sketch, she uses a digital camera or images from other sources. She enjoys the challenge of watercolors and keeping the canvas white where needed, such as a P-3 Orion flying past a snow-capped Mount Etna. Unlike oils, with watercolors there is no turning back when the paint leaves the brush.

A painter since childhood, Perin also teaches art and frescoing, which combines water colors and wet plaster. She lives in Toulon, France, with husband Patrick, a retired French rear admiral.

Perin, 49, had two tours in Naples as a disbursing officer and supply corps officer. She left active duty in 1991 and was recalled in 1996 for the Naval Historical Center&#8217;s Combat Art Program. It was founded in 1941 by Griffith Baily Coale, a muralist who persuaded Navy commanders to send artists into the field to document history-making events.

Her paintings will hang in the office spaces of the base commanding officer and Holmes and the Khaki Lounge.

The artist is planning upcoming projects in Rota, Spain, and Diego Garcia. Her work is sold at the Allied Forces Southern Europe NATO base in Naples.