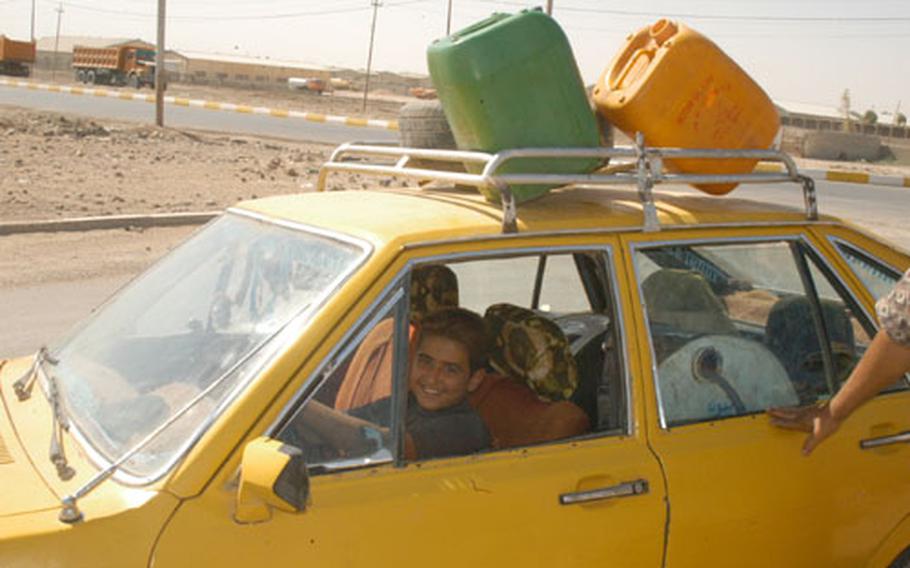 Soldiers from the 2nd Infantry Division&#39;s Battery A, 2nd Battalion, 17th Armored Regiment encountered this young driver selling blackmarket fuel by the roadside during their first patrol in Iraq. The youngster was told to sell the fuel somewhere else since it might be dangerous if an improvised explosive device went off nearby. (Seth Robson / S&S)

Soldiers from the 2nd Infantry Division&#39;s Battery A, 2nd Battalion, 17th Armored Regiment encountered this young driver selling blackmarket fuel by the roadside during their first patrol in Iraq. The youngster was told to sell the fuel somewhere else since it might be dangerous if an improvised explosive device went off nearby. (Seth Robson / S&S) 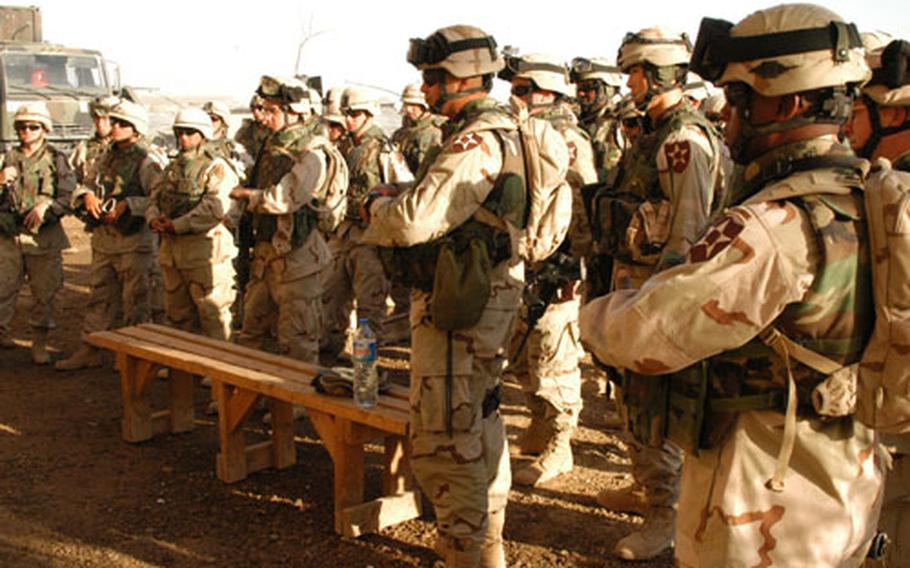 Soldiers from the 2nd Infantry Division&#39;s Battery A, 2nd Battalion, 17th Armored Regiment prepare for their first patrol in Iraq with soldiers from another unit. (Seth Robson / S&S)

CAMP RAMADI, Iraq &#8212; Artillerymen from the 2nd Infantry Division&#8217;s 2nd Battalion, 17th Armored Regiment are keeping a lid on violence in the Ramadi suburbs of Tamim and the &#8220;5 Kilo&#8221; area using infantry skills they learned while stationed in South Korea.

The battalion took over responsibility for the suburbs&#8217; security from the 1st Infantry Division&#8217;s 1st Battalion, 5th Field Artillery Regiment on Saturday. The 2-17&#8217;s Battery A will work as an infantry company during its first four months in Iraq while the battalion&#8217;s other two batteries will serve as both force protection at Camp Ramadi and fulfill their traditional artillery role. Each battery will spend four months in each role.

Before a joint patrol involving 2-17 and 1-5 soldiers earlier this month, the veterans had some advice for the newcomers.

The patrol started with a visit to the &#8220;5 Kilo&#8221; police station &#8212; a cluster of concrete buildings on the fringe of Ramadi. The 2-17 soldiers arrived, parked their new armored Humvees in defensive positions outside while their Commander, Lt. Col. John Fant, observed a meeting between Cabrey and the police chief.

The 2-17 soldiers are working with one of the better Iraqi police forces in Iraq, Cabrey said, citing the police reaction to a recent sniper attack near one of the gates of Camp Ramadi.

&#8220;A quick reaction force responded, but when they got there they found the local police had already detained the shooter,&#8221; he said.

&#8220;The police ran to the sound of the guns and detained this guy without us prodding them or assisting them. It sounds like a small thing for the police to do their job, but for me that was an epiphany.&#8221;

During the meeting at the police station, dozens of blue-shirted Iraqi police loitered around the buildings, some holding hands in the traditional Middle Eastern custom.

One of the 2-17 soldiers, Arabic linguist Pfc. Raed Khader, 22, of Fort Worth, Texas, could understand what the police were saying to one another.

The young soldier, on his first patrol in Iraq, said the country was in better shape than he expected.

Another 2-17 soldier on the patrol, Sgt. 1st Class Jeff Pridgen, 41, of Lakeland, Fla., was also pleasantly surprised. Iraq was better than the last war zone he was in &#8212; Kosovo, he said.

&#8220;That place was leveled. People were holding school outdoors year round. This is a lot nicer than there. I am really surprised,&#8221; he said.

The last stop on the patrol was a nearby university to talk to its vice chancellor. The soldiers waited in an air-conditioned building for the man to show up, but staff eventually told them he was visiting his brother in the hospital. They learned later that he had been kidnapped.

Fant said patrolling with the other unit gave him a sense of how they had fostered a good relationship with the community.

&#8220;It reaffirms how personal relationships can make a difference in any culture or environment,&#8221; Fant said, citing Cabrey&#8217;s good relationship with the police chief.

The joint patrol was a good chance for the 2-17 soldiers to observe how a seasoned unit conducted a combat patrol in Iraq, he said.

&#8220;Every time we go out the gate, it is a combat operation. The soldiers got a sense of what they are going to be dealing with,&#8221; Fant said. &#8220;The size of the streets, the clutter, the reaction of the people &#8230; South Korea could not replicate what you see out there today but the techniques we learned in South Korea are very applicable here.&#8221;