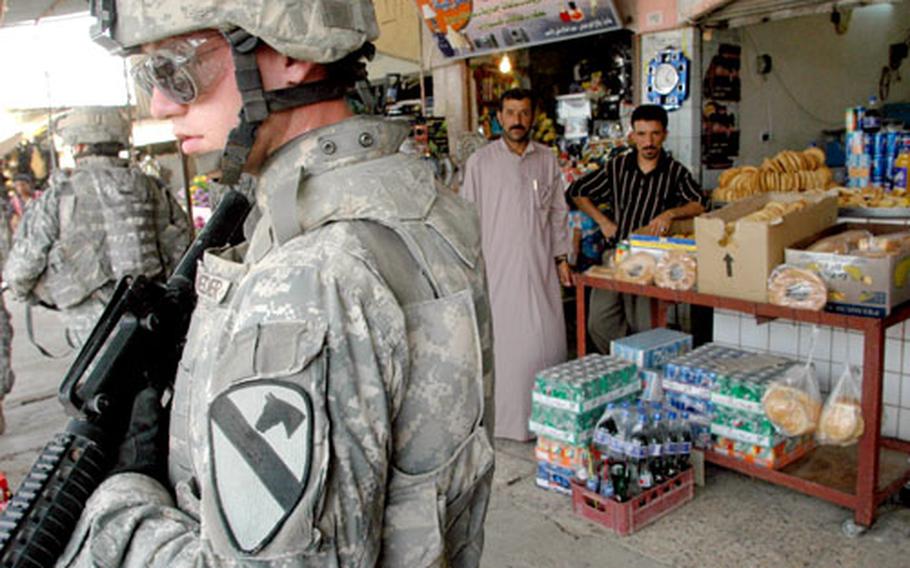 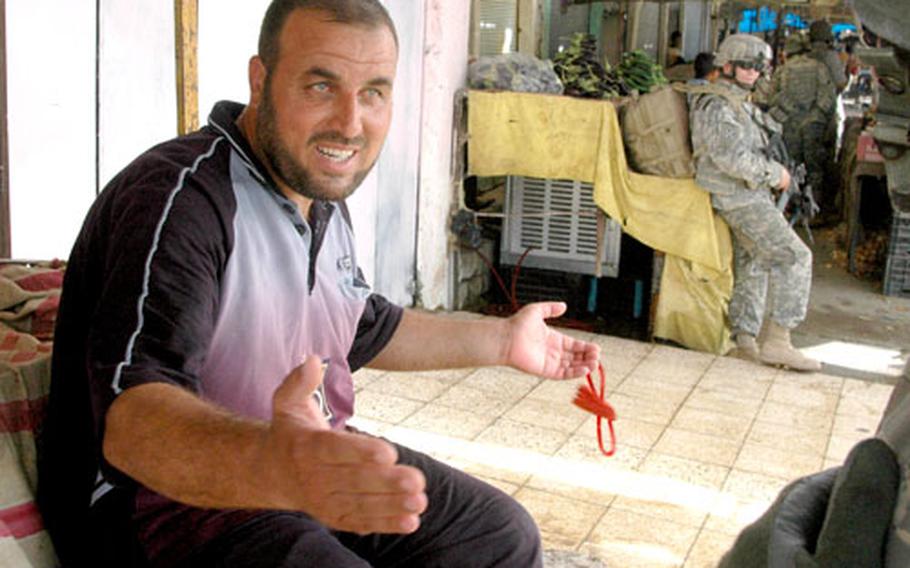 Ahmad Mohammad Ali, a taxi driver, talks with an interpreter as he holds his prayer beads. Ali says he doesn&#39;t think American forces should be in Iraq, and that many of Iraq’s problems are a direct result of their presence. (Les Neuhaus / S&S) 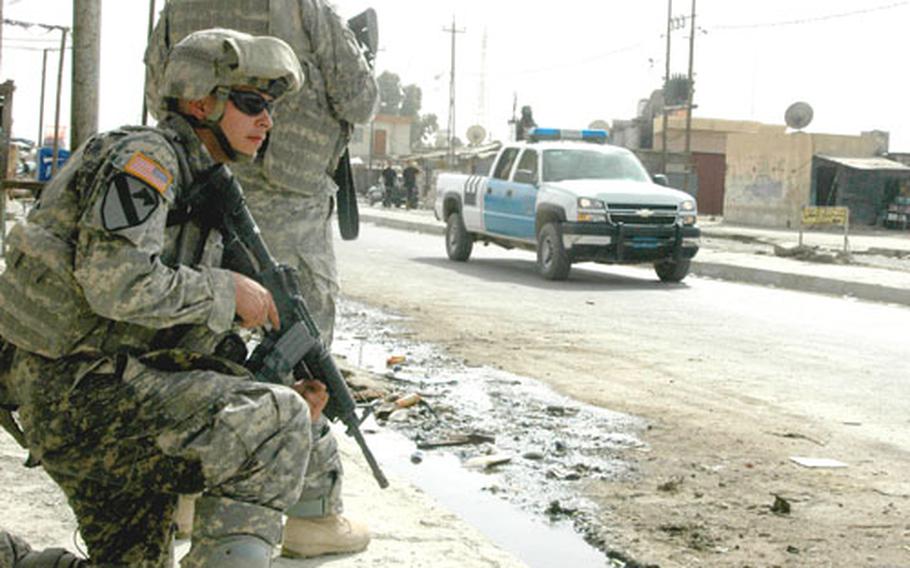 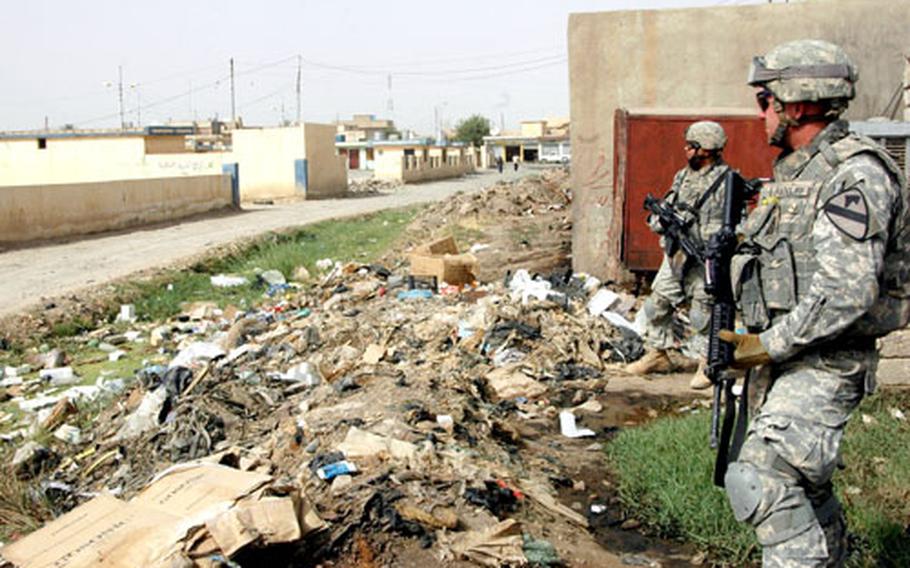 Cpl. Mason Radcliff, 22, of Prattville, Ala., (foreground) and Sgt. Francisco Santana, Jr., 28, whose family lives in El Paso, Texas, provide security for a team in a busy market about 300 feet behind them. The soldiers, with the 5th Battalion, 82nd Field Artillery Regiment, 4th Brigade, 1st Cavalry Division, based out of Fort Bliss, Texas, are next to an open sewer and piles of trash. (Les Neuhaus / S&S) 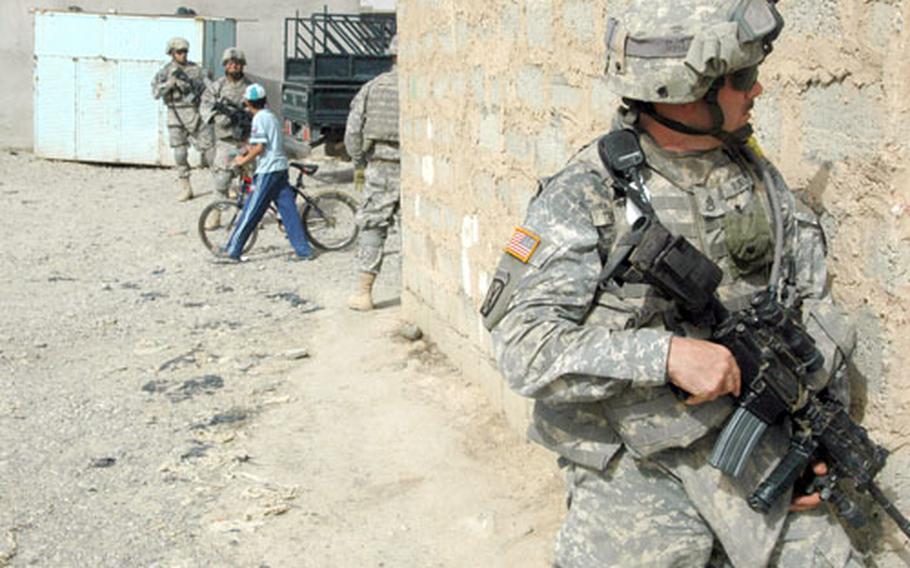 Staff Sgt. Tyler Trumble, 32, of Altmar, N.Y., peers around a corner while leading a team providing security for soldiers sweeping through the marketplace of al Qayyarah. (Les Neuhaus / S&S)

QAYYARAH, Iraq &#8212; Foot patrols tend to be dangerous work for the U.S. military in Iraq, and though infantrymen typically conduct these operations, in Iraq, artillerymen are getting their fair share of the beat as well.

Members of the 1st Cavalry Division&#8217;s 5th Battalion, 82nd Field Artillery Regiment did just that on Sunday afternoon in the market place of Qayyarah, 30 miles south of Mosul in Iraq&#8217;s north.

He was here in 2003, when U.S. forces invaded Iraq and deposed Saddam Hussein. He left the Army under honorable conditions after his enlistment was later completed. But he chose to come back for more and re-enlisted again last year &#8212; volunteering for another tour of duty in Iraq.

Iraqi police participated in the patrol, providing cover to the troops, who, as artillerymen, are performing support to other members of their battalion, even acting as a quick reaction force at times. They have to mingle with locals, who view them with both gratitude and suspicion.

Not everyone shared his enthusiasm.

The patrol itself &#8212; with its up-armored Humvees with various makes of heavy machine guns poking out and twisting around in the turrets &#8212; heaved down the street at the same pace as the soldiers on foot, and became a sort of circus show for the locals&#8217; curiosity.

Some of the people scowled as the troops passed. Some business owners smiled, however, and tried to make a pitch to the troops for their wares.

Qayyarah is a township of roughly 22,000, according to local officials. Its proximity to Forward Operating Base Q-West, about 20 minutes east from the base by road, makes it an easy place for the U.S. Army to monitor. FOB Q-West is the temporary home to the battalion and a host of other support personnel.

The market was quiet for the most part on Sunday, which was good for the soldiers. They were able to pick up some valuable intelligence through specific queries posed to shopkeepers by the interpreters.

By the end of the patrol, the soldiers had sweated through their uniforms in the torturous heat.