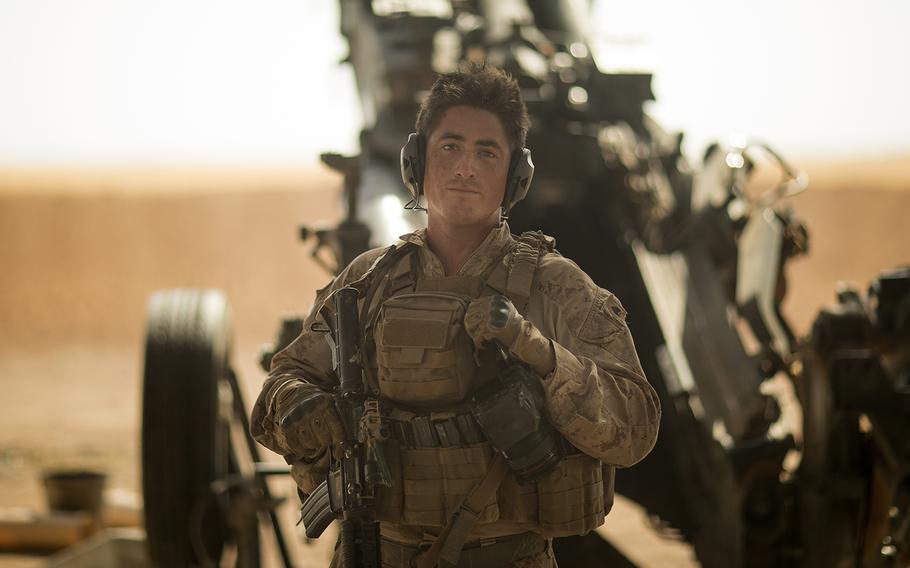 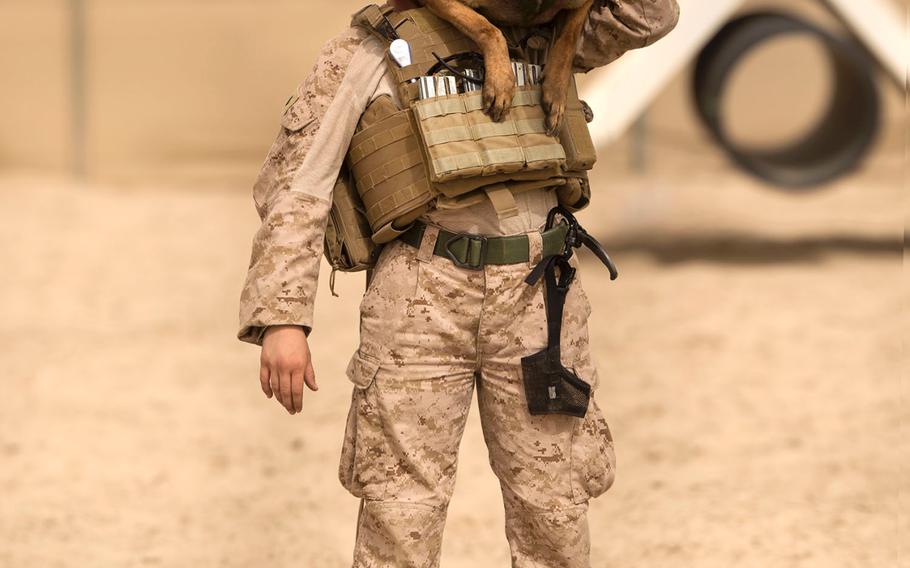 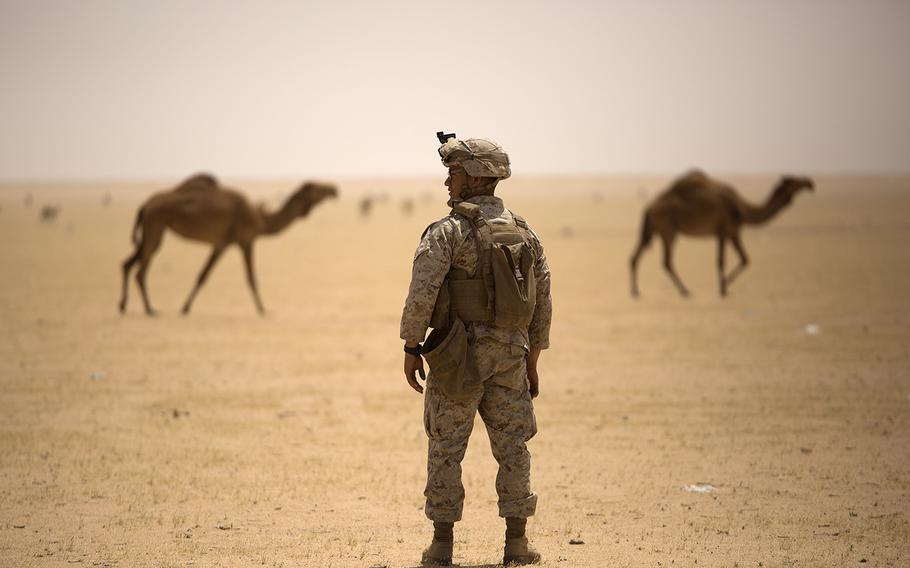 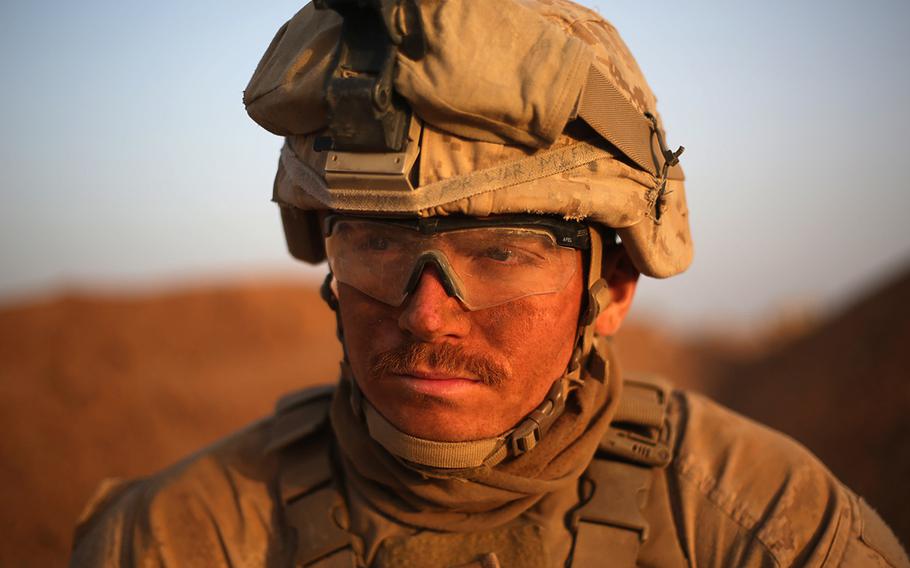 A Marine deployed in support of Operation Inherent Resolve rests at his machine gun pit, May 15, 2017. (Matthew Callahan/U.S. Marine Corps) 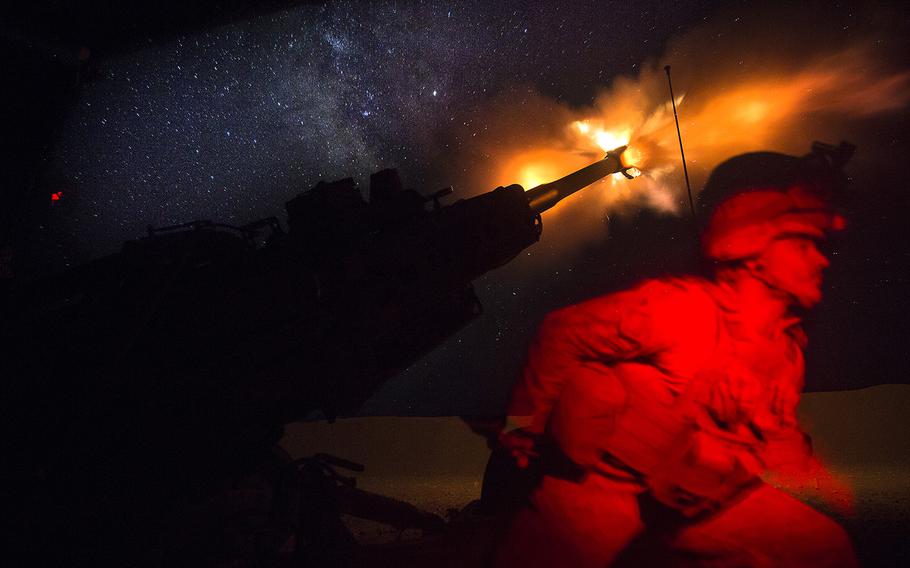 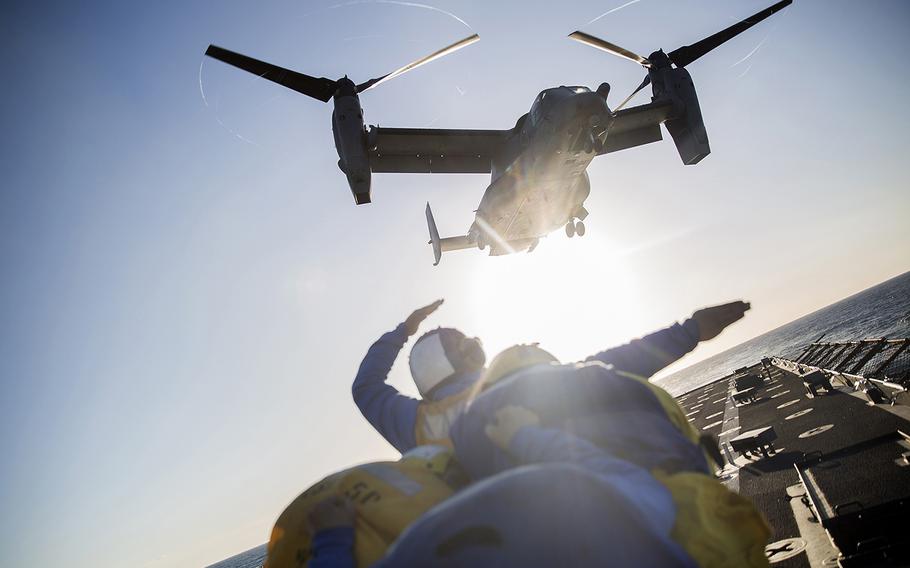 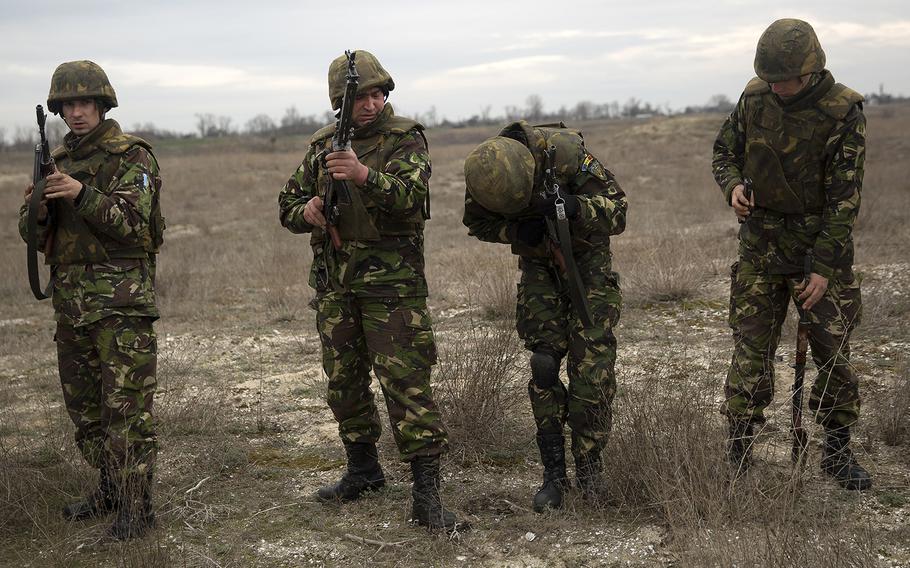 A Marine who filmed and photographed artillery strikes on the Islamic State in Syria is the first servicemember ever to be named both Military Photographer and Videographer of the Year.

Sgt. Matthew Callahan was recognized Saturday at the 2018 Eyes of History Gala hosted by the White House News Photographers Association in Washington, D.C. The military first began naming a top photographer in 1961. Videographers followed in 1989.

“What I try to do with my videos or photos is to get at the heart of it all, what it means to be a servicemember, what our missions are, what we do,” he told Stars and Stripes during a recent video call.

The 27-year-old documented an eight-month journey of the 24th Marine Expeditionary Unit and its thousands of men and women as they embarked from Camp Lejeune, N.C., for the Middle East.

One of his videos shows the USS Bataan's color-coded flight deck crew launching jets and helicopters. Another shows an amphibious assault across the Black Sea onto Romanian beaches. Some of his photographs illustrate odd realities of military life, such as a Marine watching camels cross a gunnery range in Kuwait.

Armed with a rifle, drone and camera, Callahan found himself working alongside artillerymen battling the Islamic State group in Syria last year.

“The mission itself was just nuts – they literally, all day, all night for months straight … just fired nonstop. You wake up to the booms; you go to sleep to the booms,” he said.

Callahan shot his most dramatic photo — of an artilleryman drenched in red light firing across a Syrian star-scape — during a four-hour night-fire mission.

“I was up all night on the gunline with them,” he said. “This one gun was firing an illumination round every 20 minutes. I had one shot every 20 minutes to get it right.”

Halfway through the mission, Callahan got the shot — using a red light to freeze the action.

“You hear on the radio 'Standby.' I open the shutter up and as soon as he said ‘Fire,’ I saw him moving and it was ‘shwoop-shwoop.’ It's my 'Starry Night,'” he said, referencing the famous painting by Vincent Van Gogh.

Instead of oil on canvas, Callahan used a six-second exposure at 2500 ISO with a quick splash of red light, and it may have never happened if it weren't for an unlucky deployment to Afghanistan.

In 2009, then-17-year-old Callahan and group of high school friends from Pembroke, Mass., decided to join the Marine Corps.

“We all wanted to be hard-chargin' grunts,” he said.

The newly minted Marine got his wish, deploying to Afghanistan in 2010, but tragedy struck on his first foot patrol, about a month into his tour.

While healing at a warrior-transition unit in Hawaii, Callahan was asked to photograph a chaplain's barbecue. Impressed with his work, the chaplain asked him if we wanted to work at the public affairs shop on base while he recovered.

“We have picture-takers in the military?” Callahan asked.

After another year and a half in the infantry he earned his combat correspondent identifier from the Defense Information School. A military journalism program at Syracuse University honed his skills for the Syria deployment.

All services are merging military journalists’ job designations and want troops who can write as well as shoot photographs or video. Callahan, who's leaving the Marines in a few months, said he's proof the old guard is wrong in resisting the change.

“You can do both – you can be good at both,” he said, adding that leaders need to enable troops “to create and tell stories that people give a damn about.”