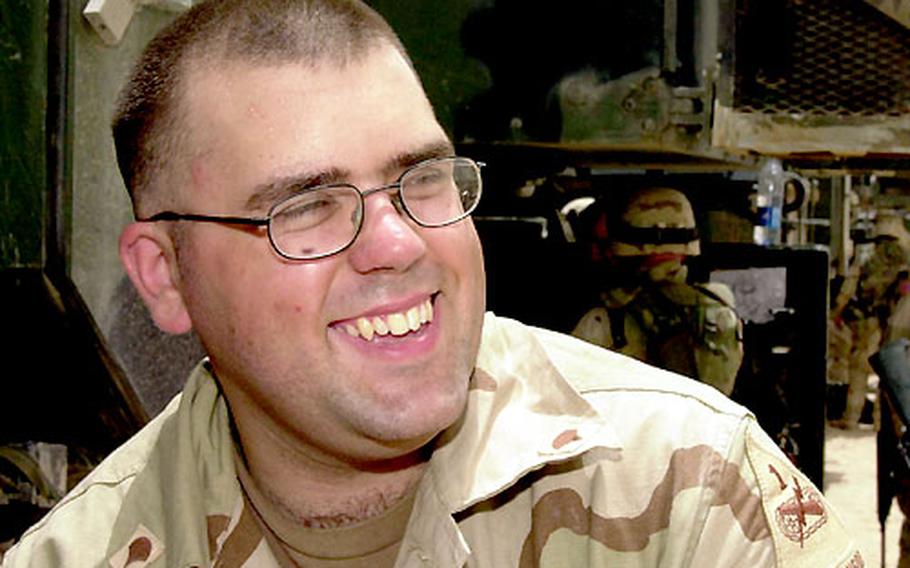 Spc. Ryan Glowacki, 22, of Pinckney, Mich., struck out on his own across the desert when the flatbed truck carrying his M109 Paladin broke down in Kuwait. (Rick Scavetta / S&S)

CAMP UDAIRI, KUWAIT &#8212; Ever since Spc. Ryan Glowacki drove his mobile artillery track 25 miles alone through the desert last week, his story has been the talk of 1st Brigade, 1st Armored Division.

An artilleryman with the 2nd Battalion, 3rd Field Artillery Regiment, Glowacki, 22, of Pinckney, Mich., spent last Friday night in the desert beside a broken-down flatbed truck that carried his 155 mm howitzer.

Glowacki had been at the Shu&#8217;aibah port unloading equipment for three days.

As his convoy headed north, to the desert camps outside Kuwait City where 1st Armored Division soldiers stage their equipment before heading into Iraq, he heard the truck&#8217;s transmission grinding. Somewhere near Ali al Salem air base, the truck stopped.

Glowacki flagged down another truck, the last in the convoy, and told a private to send an empty truck back for him. Hours later a truck returned, but the civilian driver was tired and went to sleep.

Glowacki let the man rest, but as the sun came up, he tried to wake the driver.

Back at camp, Glowacki&#8217;s buddies were not sure what happened to him.

Glowacki forced his driver to drop the truck&#8217;s ramps and then unloaded the mobile artillery piece. With no map, and just a general idea of which way to head, Glowacki fired up the M109 Paladin&#8217;s engine and headed off along the desert path. They don&#8217;t call it a self-propelled howitzer for nothing.

Glowacki stopped a Humvee, and soldiers pointed him in the right direction. There are only a few vague road signs that the Army tacked up at key intersections. He saw the area on an earlier trip to Udairi, but in the desert everything looks the same &#8212; tan and flat. He remembered seeing a broken axle on the road. If he saw it again, he would know he was on track.

Passing troops were amazed to see the lone artillery piece and a soldier on a solo mission.

When he heard noises from the vehicle&#8217;s tracks, Glowacki stopped. The track&#8217;s end connectors were coming loose. He found a hammer, pounded the connectors back on, and hit the trail.

Outside one camp, Glowacki stopped beside a convoy. When soldiers said they were going to Baghdad, Glowacki&#8217;s heart sank. He thought he had overshot the camp and driven clear to an airfield on the Iraqi border. Then his vehicle wouldn&#8217;t start.

He wandered over to a cluster of fuel trucks. A driver provided jumper cables and some enlightening information.

With his destination in sight, Glowacki felt better. He rolled through the camp gates and parked with his unit.

Glowacki&#8217;s endeavors were in the spirit of what the U.S. Army teaches troops, to make decisions and accomplish tasks on their own, said Command Sgt. Maj. Eric Cooke, 1st Brigade, 1st Armored Division&#8217;s senior enlisted man.

It reminded Cooke, 42, of Phoenix, of Operation Desert Storm, when Saudi drivers often abandoned tanks along the desert roadside.