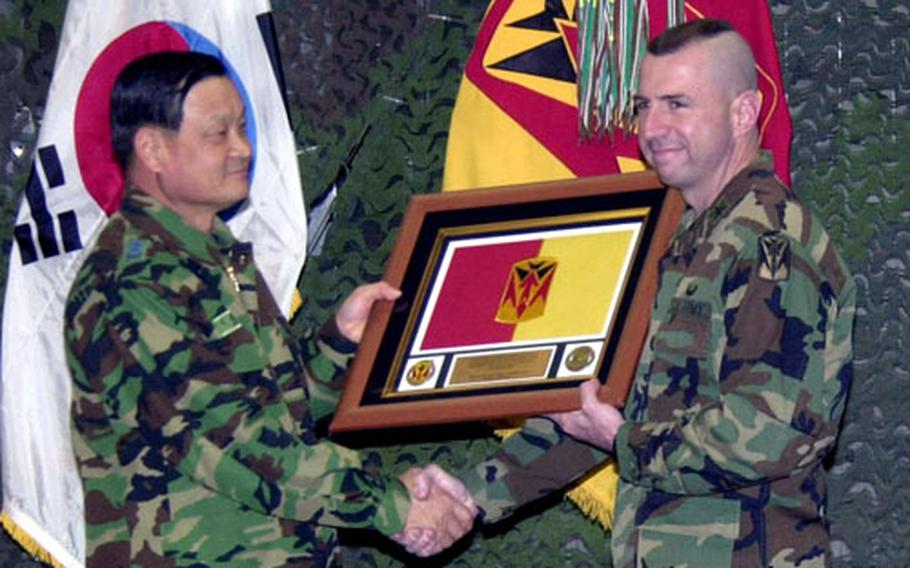 The following correction to this story was posted on Dec. 20: "A Dec. 18 story about the 2nd Battalion, 1st Air Defense Artillery, should have stated the Dec. 15 gathering was to celebrate the unit&#8217;s one-year anniversary, not a flagging ceremony."

About 400 battalion soldiers, U.S. and South Korean guests gathered in the theater at Kwangju, a South Korean Air Force base, on Thursday. The ceremony began with a brief slide show of soldiers working and playing on base and in the community.

He also thanked them for creating an &#8220;exceptional partnership&#8221; with the community, while saying that would have been impossible without Park&#8217;s help.

Park, the Korean American Friendship Society Kwangju chapter president, traveled to Fort Bliss to foster a relationship with the leaders before they moved to Korea. He also worked with the Kwangju community as U.S. soldiers moved to the base.

Operations Sgt. Maj. Javier Fernandez arrived with the advance party in October 2004 to help prepare for the unit&#8217;s arrival. He said the South Korean military has been key to his battalion&#8217;s success.

According to information provided by the battalion, soldiers adopted two local orphanages, helped prepare a home for the handicapped for winter, partnered with South Korean military forces and hosted an open house. And in their first year at Kwangju, they volunteered about 1,000 hours in the off-base community.

He said his troops are spread out across the peninsula, from Camp Casey near the Demilitarized Zone separating North and South Korea to Kwangu in the peninsula&#8217;s southwest portion.

While most one-year rotations on the peninsula are soldier by soldier, the air defense soldiers are the only ones to rotate entire fire batteries in and out. The Army is adopting that system as part of transformation, Rossi said, &#8220;and we&#8217;re at the forefront.&#8221;