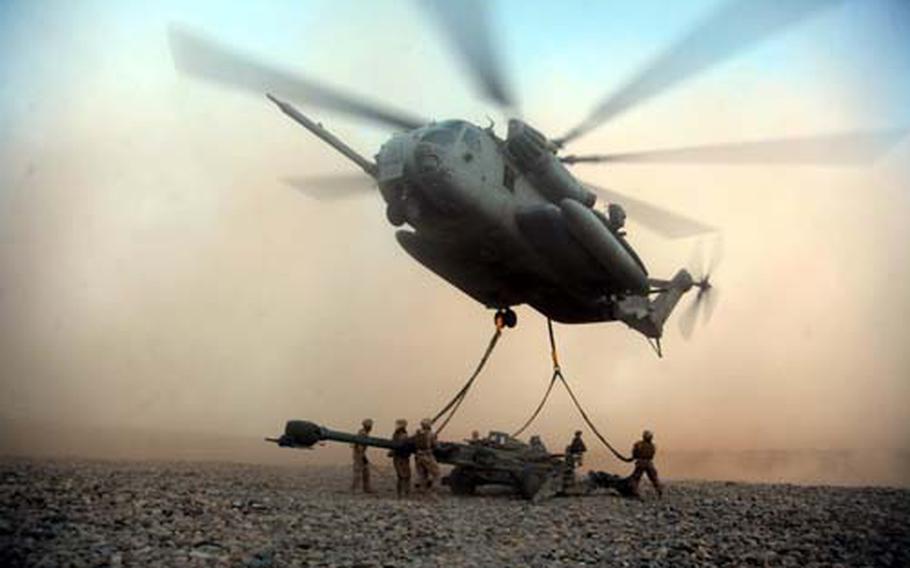 YOKOTA AIR BASE, Japan &#8212; Marine Corps artillerymen are back to manning the big guns.

The service deployed its first artillery battalion to Afghanistan in the spring and is spinning up artillery training everywhere from Camp Fuji, Japan, to Twentynine Palms, Calif., to fill the deployment pipeline.

Large-scale artillery exercises at Fuji &#8212; such as an upcoming cycle involving 400 Marines from Okinawa &#8212; were shelved during much of the past six years while artillerymen deployed to Iraq, mostly as provisional security forces, Hanweck said.

Because the Iraqi insurgency was concentrated in urban areas and relied heavily on roadside bombs, artillery was scarcely needed after the initial 2003 invasion. Instead of pulling lanyards, artillerymen raided houses, patrolled neighborhoods and escorted convoys.

But in Afghanistan, where Taliban and al-Qaida fighters engage U.S. troops in the country&#8217;s rural outreaches, heavy gun power is proving a vital part of operations, said Lt. Col. James Lewis, commander of the 3rd Battalion, 11th Marine Regiment. The Camp Pendleton, Calif.-based artillery unit deployed to Helmand province in May as part of the 10,000-strong Marine force that delivered the opening salvos of the renewed fight in Afghanistan.

However, with stricter rules of engagement put in place this summer to better protect Afghan civilians, determining when and how to employ the howitzer and other conventional weaponry has been part of the learning curve for the 3-11 and the regional combat team it supports in southern Afghanistan, Lewis said.

"We came here with a really good focus on a decision-making process [for granting fire requests] that we&#8217;ve continued to refine," said Lewis. And advancements in artillery technology have not only made cannon and rocket units lighter and more flexible on the battlefield, but also more accurate, he said.

"We&#8217;re essentially doing the same thing we&#8217;d do in a conventional fight but with a [counterinsurgency] focus," said Lewis.

There is no data to show the rate of ground-based fire missions since Gen. Stanley McChrystal issued a July 1 directive limiting airstrikes and artillery bombardment to cut down on civilian casualties, though it has been reduced in recent months, said Col. Wayne Shanks, spokesman for U.S. Forces Afghanistan.

Missions are now focused on engaging the enemy in the least destructive way possible, but that does not preclude commanders from granting fire support to protect troops in harm&#8217;s way, Shanks said.

"If Marines are taking effective fire and require supporting arms, that&#8217;s one of the reasons we&#8217;re here," Lewis said. "The vast majority of our fires with cannons and rockets are in self-defense."

Though the entire strategy in Afghanistan could be turned on its head as President Barack Obama and Secretary of Defense Robert Gates consider McChrystal&#8217;s assessment of the current situation on the ground, Marine artillerymen continue to prepare for combat in their traditional roles, according to the Pentagon.