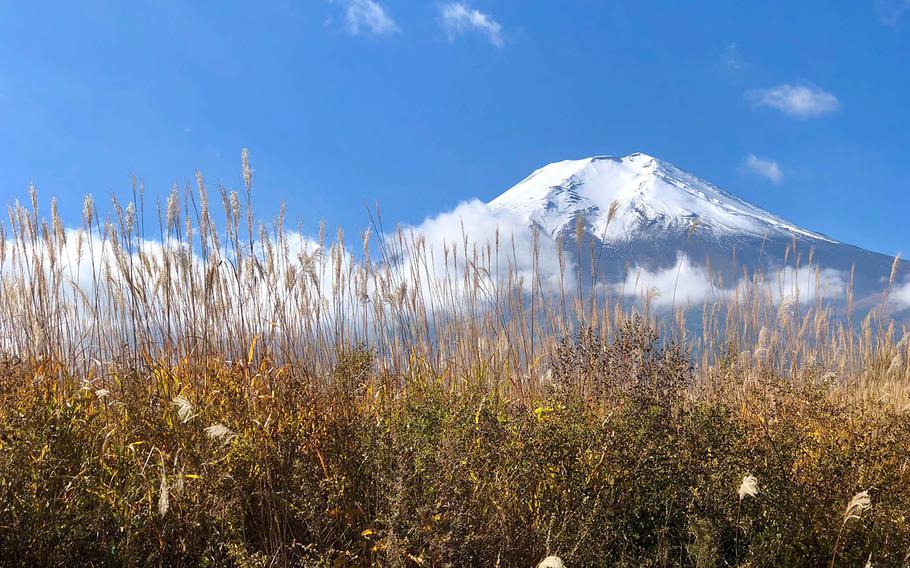 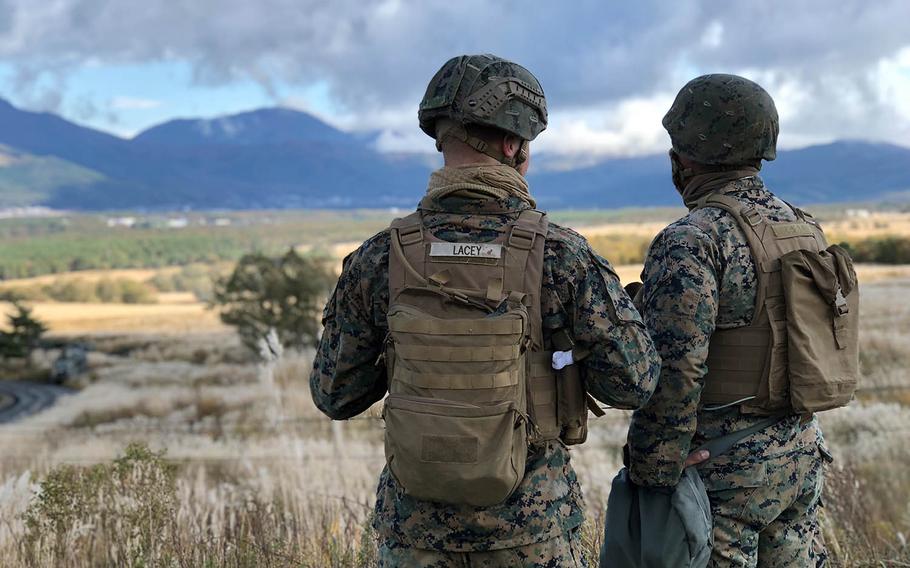 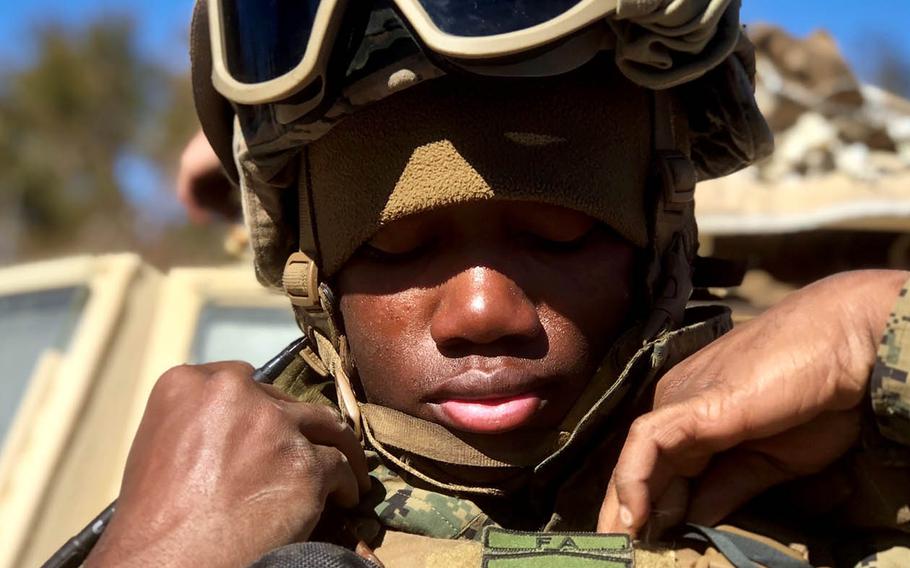 Buy Photo
Lance Cpl. Stevie Harrison shows off a patch given to him by a Japan Ground Self-Defense Force soldier during artillery training near Mount Fuji, Japan, Sunday, Oct. 28, 2018. (Caitlin Doornbos/Stars and Stripes) 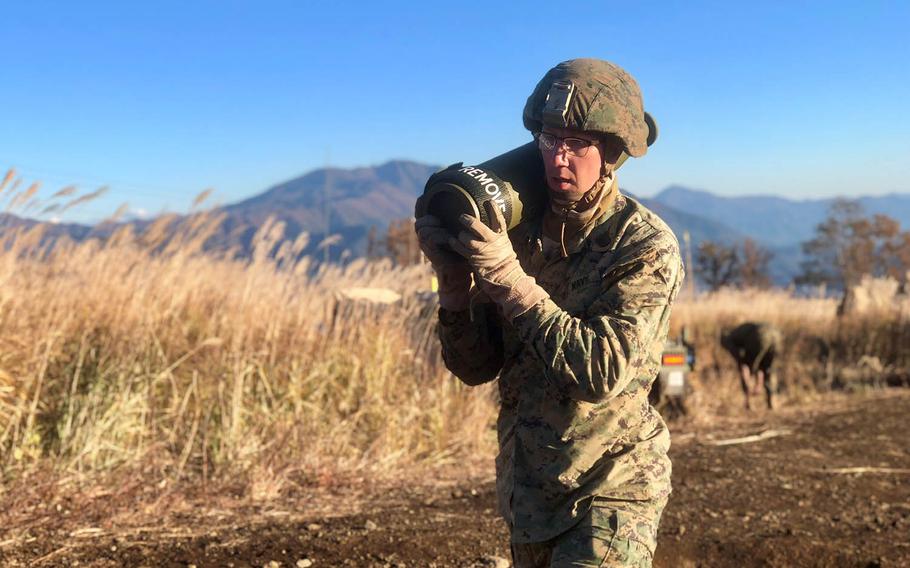 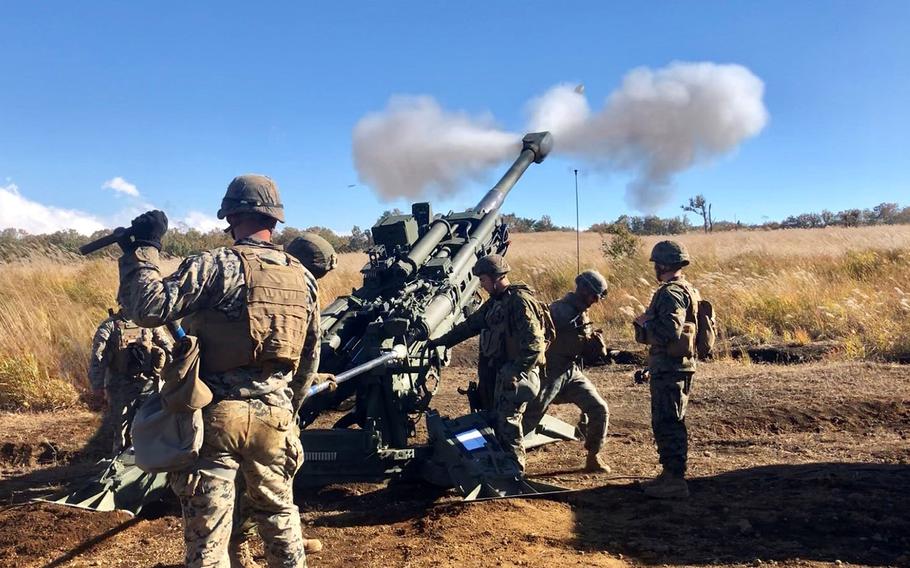 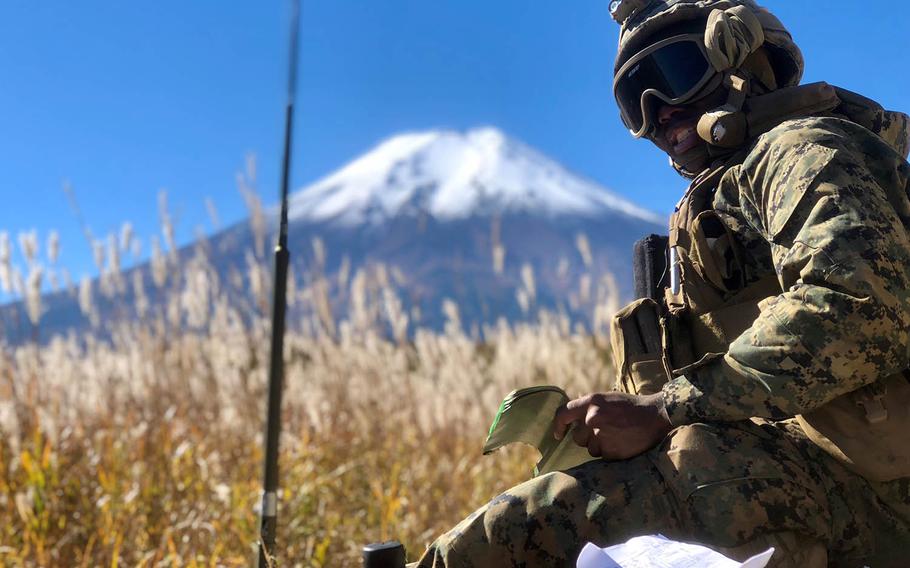 CAMP FUJI, Japan — On a recent chilly morning in the shadow of a snow-capped Mount Fuji, a battery of Okinawa-based Marines hauled 100-pound rounds of artillery munitions across their base camps on a range at Combined Arms Training Center Camp Fuji.

The task — along with other efforts assigned during an Artillery Relocation Training Program exercise late last month — aimed to simulate challenges the group might face during combat missions.

The 3rd Battalion, 12th Marines participated in the 10-day ARTP exercise through early this month. Along with the 450 Marines and sailors from three batteries came a battalion’s worth of equipment, including about 12 howitzers, multiple 7-ton tactical vehicles, Humvees, forklifts, wreckers, guns, protective gear and ammunition.

For more than 20 years, the Japanese government has been paying to move U.S. military personnel and equipment from Okinawa to mainland Japan for artillery training.

The arrangement started after the United States agreed in 1996 to end live-fire drills on Okinawa “to reduce the burden on the people of Okinawa and thereby strengthen the U.S.-Japan alliance,” according to a Japan-U.S. Special Action Committee report from the time.

Still, the U.S. was obligated to keep up its artillery proficiency to defend Japan under the Treaty of Mutual Cooperation and Security. The countries then devised ARTP, in which Japan pays to relocate equipment and servicemembers needed for artillery drills on the mainland four times a year at one of five sites from Hokkaido to Shizuoka prefectures.

The training typically involves an entire battalion twice a year with smaller, battery-sized events during the other sessions. The number of live-fire days cannot exceed 35 in a year and must be split among training sites. Individual sites can be used for only a maximum of 10 days annually, according to the agreement.

Capt. Andrew Horgan, commanding officer of the headquarters battery company that participated in the recent exercise at Camp Fuji, said having the chance to practice shooting artillery is essential to keeping up proper defense proficiency.

“If we can’t shoot, there could be a loss at how effective we are,” he said. “To watch a cannon execute properly, it’s ballet with a 100-pound round.”

Challenging terrain The opportunity to practice in various environments helps prepare Marines to operate in challenging terrains that they may not be accustomed, said 3rd Battalion commander Lt. Col. Richard Robinson III.

The wild grass in the North Fuji training area towered more than six feet high during the recent ARTP, making maneuverability through uncut areas nearly impossible. The black, volcanic rock that covers the area’s uneven ground made for tricky topography on long hikes. And in late fall, temperatures in the heightened-altitude region dipped into the low 40s at night as servicemembers slept in sleeping bags outside.

“It’s realistic training in a stress-induced environment,” said Lt. Jack Perham, a fire support officer. “These are things we can’t do in a simulator. We train how we would actually be operating.”

“This weather is different than other places, especially coming over from Okinawa where it’s warm, and you come here it’s a little chilly and windy,” Boles said. “I definitely appreciate that I get to hone my skills because it helps my Marines.”

The challenge was invigorating for Marines like Lance Cpl. Spencer McCarty.

“This is what I really joined [the Marine Corps] for,” he said while standing guard outside the headquarters battalion’s base camp. “To be in the field, going to other countries and exploring.”

“Stuff doesn’t always go as planned,” he said. “We’re dealing with issues we’ve never seen before just going off of what we knew from the schoolhouse. This is the only place you can learn it.”

All roles practiced ARTP is not just for the cannoneers firing the howitzers — every role in the battalion is practiced. Robinson said the exercise “provides the opportunity to practice all the other skill sets that we would need in moving forward to crisis response.”

“We practice embarkation, combat logistics and obviously the essential live-fire training that we do here, but also field training and combat medicine and maintenance, repair, supply,” Robinson said. “All the essential functions that keep us moving forward as a battalion, we all get the opportunity to do out here as part of the ARTP.”

“I get to actually do what I was meant to do,” Fernandezrubio said of being able to do small-arms training at ARTP.

Torres and Fernandezrubio also worked security shifts outside of their regular culinary duties.

“I like it because being a cook is not all about being in the mess hall, but actually going out and being a Marine,” Torres said.

Cultural exchange Though the exercise is supported by the Japanese government, not all Japanese citizens were pleased with the thundering booms that rattle the area during Camp Fuji’s ARTP.

On Oct. 28, a group of protesters stood with signs outside the gates to the training area opposing use of the grounds for such purposes. Some protested the use of explosives so close to Mount Fuji, a UNESCO world heritage site viewed by many as a sacred place.

Others, including several Japan Ground Self-Defense Force servicemembers, were more welcoming. While on duty at a security point near an area on the training grounds where JGSDF members were working, some Marines had meaningful exchanges with their Japanese counterparts.

Lance Cpl. Stevie Harrison said he traded a pocket knife with a JGSDF private first class, who gave Harrison a pair of lotus-shaped rank pins and a JGSDF patch.

“I’ll save them for souvenirs for the future and keep them in a safe place,” Harrison said. “As we were speaking, [the JGSDF soldier] also taught me about their rank structure. He was a leading PFC, which is like a corporal in the Marine Corps.”

“They were amazed by our gear — they said they don’t have armor plates in their flak [vests,]” Harrison said. “I thought it was pretty cool how curious they were when looking at our stuff.”

ARTP recently wrapped at Camp Fuji, and all equipment and personnel will soon return to Okinawa.

3rd Marine Division spokesman 2nd Lt. Gerard Callan said the exercise is an example of the U.S.’s commitment to its relationship with Japan.

“The U.S. and Japan have a long-standing history of cooperation as treaty allies for over 70 years,” he said. “We are committed to being good partners and will utilize these training opportunities to hone our warfighting skills to better provide for the defense of Japan.”