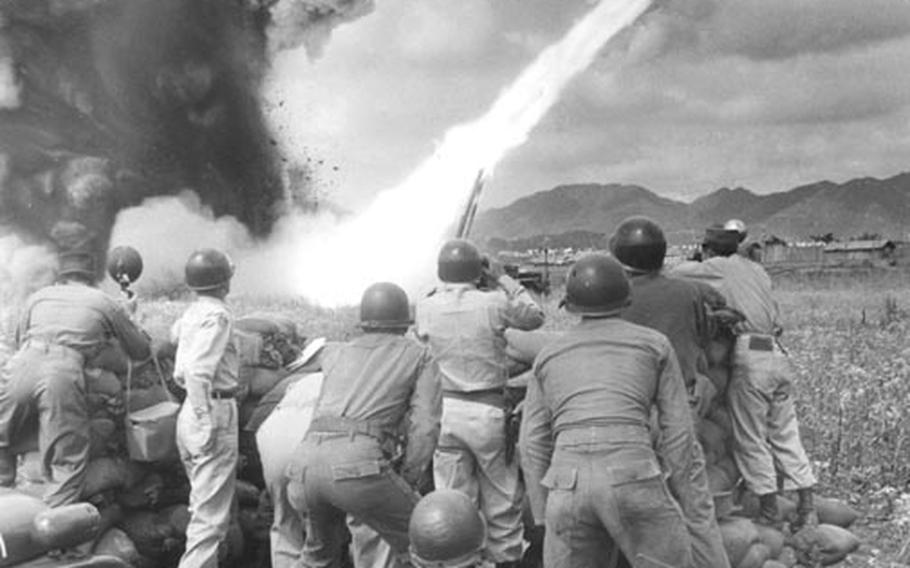 Buy Photo
An Honest John rocket blasts off at a firing range in South Korea in 1959. (Stars and Stripes)

SEOUL — The artillery arm of the U.S. Army — the men who lob devastation into an enemy to pave the way for onrushing infantry — celebrates its 184th birthday Tuesday, with a history dating back to American patriots firing captured British cannon at Ft. Ticonderoga.

From cannon ball and chain at a distance of a couple of thousand yards to long-range atomic pieces that reach distances exceeding 20 miles, the artillery has traced a pattern of constant improvement and more lethal firepower.

After the Revolutionary War, the first severe test for the artillery branch of America's fighting forces came in the Civil War, where Union and Confederate troops hammered at one another using makeshift ammunition and guesswork for distance ratios.

AT THE BATTLE OF GETTYSBURG, Gen. Meade's battalion fired over 32.000 rounds in three days. Big brother of all the long-range cannon in the U.S. artillery arsenal is the mammoth 280-mm. gun, so big that it takes two special trucks — one fore, one aft — to move the weapon.

An intricate communication system between the two drivers is necessary before one makes a move. Failure to stay in touch could mean obliteration of anything in the giant gun's path.

HOWITZERS STILL PLAY a vital part in making artillery dangerous to an enemy. There are six to a battery, largest of which is the 8-incher, capable of putting nuclear weapons into enemy territory up to 15 miles.

Three men from a battery make up the air control team, plus an Air Force pilot assigned. He directs air operations from the ground.

The Honest John artillery rocket is the toughest the U.S. has on the ground, able to carry a 1,500 pound warhead more than 20 miles.

WITH THE INCREASE of destructive potential and range of artillery, came the need for greater accuracy. The men who make it possible to "put it right down their throats" are the meteorologists — "metro section."

They release electronic computers by balloon and gain readings on high-altitude weather conditions which are relayed to fire directional centers.

Artillery is composed of many men in many jobs. One part is useless without the other. Teamwork makes it pay off.