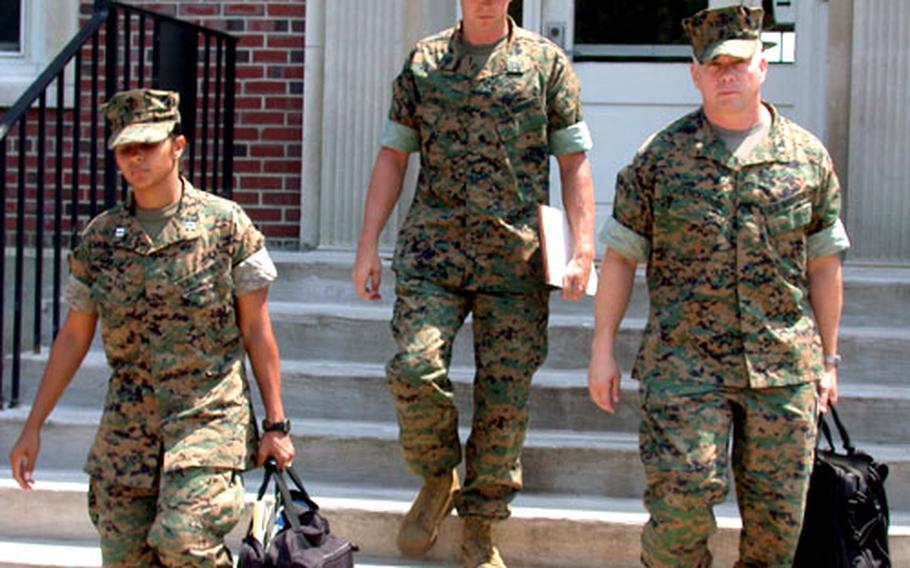 MARINE CORPS BASE QUANTICO, Va. &#8212; Testimony focused Tuesday on the Bucharest intersection where a Marine is said to have killed a Romanian rock star in an auto accident in December.

Stop signs at the scene &#8220;were a clear indication you had to stop at that intersection,&#8221; Special Agent James Loftstrom of the Naples, Italy, branch of the Naval Criminal Investigation Service said Tuesday at the Article 32 hearing for Staff Sgt. Christopher R. VanGoethem.

Loftstrom told the investigating officer for the case, Marine Lt. Col. Stewart Couch, that the placement of three stop signs at the scene were &#8220;unusual, but to me it was clear what you had to do.&#8221;

VanGoethem, 32, is a former commander of the Marine security detachment at the U.S. Embassy in Bucharest.

He is facing charges that stem from an accident that killed 50-year-old Teofil Peter, veteran producer and bassist for the rock band Compact, on Dec. 4.

A Breathalyzer alcohol test of VanGoethem taken by Romanian police at the site of the crash read 0.019 percent, Dowsett said.

In most U.S. states, the legal limit for blood alcohol is 0.08 percent.

But in Romania, it is illegal to drive with any alcohol in the blood.

Nevertheless, Dowsett told Couch that he has investigated &#8220;probably hundreds&#8221; of alcohol-related crashes and that in his opinion, the effect the alcohol found in VanGoethem&#8217;s blood was &#8220;none.&#8221;

Asked by Couch if Dowsett would have cited VanGoethem if he had been the law officer at the scene of the Bucharest accident, the trooper replied, &#8220;I might have brought him [in] for reckless [driving], but &#8230; [I] wouldn&#8217;t be looking for a conviction.&#8221;

Instead, Dowsett said, if he was the charging officer, he personally would have said the Marine bore &#8220;slight fault&#8221; for the accident.

While in Romania, Dowsett said he worked with a Romanian vehicle crash expert to inspect, photograph, and map the crash scene, interview Romanian officials and some of Peter&#8217;s family members, and inspect and photograph both vehicles.

VanGoethem was returning to the U.S. Embassy about 4:30 am local time, driving a dark-blue 2000 Ford Expedition 4x4 owned by the embassy.

VanGoethem&#8217;s &#8220;ability to see traffic approaching on his left was severely limited by the building&#8221; on the southwest corner of the street, Dowsett said.

The Ford ended up broadsiding a yellow, 2001 Dascha taxi, which was passing through the intersection from the Marine&#8217;s left-hand side.

The taxi rolled sideways and hit a concrete barrier topped with metal, Dowsett said. The force was great enough to toss the taxi in the opposite direction.

Dowsett specifically contradicted earlier Monday testimony by a NCIS official, who had said the taxi flipped four times after being hit.

Dowsett said he was never allowed by Romanian authorities to talk to the taxi driver, who was allegedly injured in the crash.

On returning to Virginia, Dowsett did calculations and computer modeling, and said his calculations dovetailed with the Romanian report about the crash, with the possible exception of one minor math error the Romanian inspector later amended.

The trooper said both his conclusion and the Romanian report placed the Ford traveling about 40 km (25 mph) in a 50-km zone at the time of the accident.

Although the intersection was marked with four stop signs, as well as the lights, one of the signs is confusingly placed and another, critical to the investigation, is obscured &#8220;by a tree that leans into the roadway,&#8221; Dowsett said.

Adding to the confusion, Dowsett said, were the four-way lights hang above the intersection, flash red, yellow and green during the day, and change to amber late at night, Dowsett said.

In Romania, unlike America, however, flashing amber lights indicate that a driver should give right of way to approaching drivers &#8212; not simply slow and approach with caution, Dowsett said.

Given the late hour, Dowsett said he wondered if VanGoethem might not have been fatigued, and tired drivers &#8220;return to what [they] know.&#8221;

Dowsett added a recommendation to his report that Marines and other U.S. personnel in Romania be given some sort of &#8220;rules of the road&#8221; training before the drive.

When the evidence has been fully presented, Couch will make a recommendation regarding VanGoethem to the convening authority, Col. William E. Rizzio, commander of the Marine Security Guard Battalion at Quantico.

Rizzio has the option of adopting Crouch&#8217;s recommendations, or mandating his own treatment of the case.