Capt. Dexter Holley, commander of Company B, 2/72 Armor, gives an “op order” brief the day before a simulated battle in the Strike ARTEP exercise Sunday in the hills of South Korea. (Joseph Giordono / S&S)

Capt. Dexter Holley, commander of Company B, 2/72 Armor, gives an “op order” brief the day before a simulated battle in the Strike ARTEP exercise Sunday in the hills of South Korea. (Joseph Giordono / S&S) The crew of Red 1, a tank with Company B, 2/72 Armor, prepares to move into battle position before a mock engagement. (Joseph Giordono / S&S) 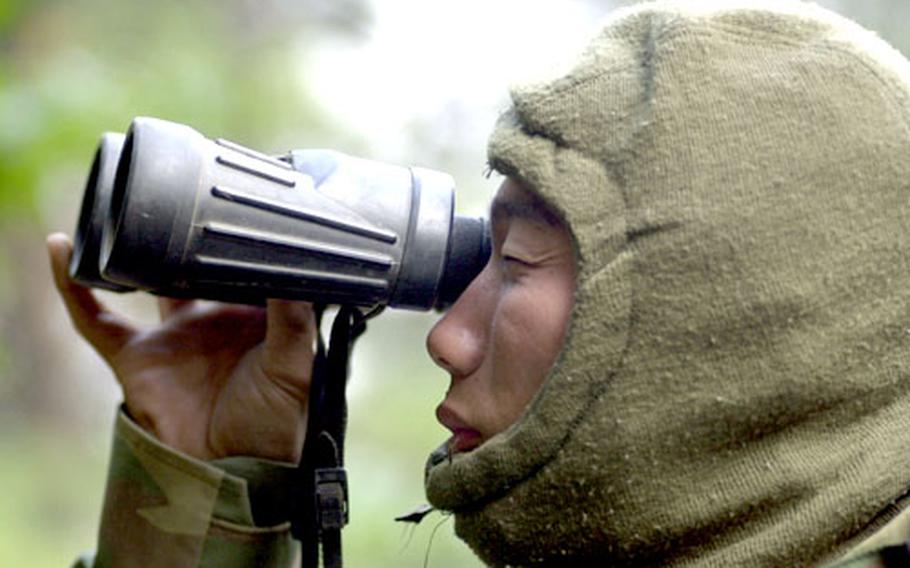 TWIN BRIDGES TRAINING AREA, South Korea &#8212; Even though 1st Platoon lost half its tanks to artillery before the enemy armor attacked through a smoke-obscured mountain pass, the battle plan for Company B, 2nd Battalion, 72nd Armor Regiment held up.

As the smaller, defensive force in a simulated battle during the second week of the Strike Army Readiness Training Evaluation Program exercise, the Bulldog Company tankers were tasked with beating back an overwhelming assault by enemy armor and infantry while defending the left flank of 1st Battalion, 506th Infantry Regiment.

By the time the smoke cleared around midmorning Monday, it was clear they had done just that.

Being flexible and adapting to changing battlefield situations are among the goals of this year&#8217;s 2nd Infantry Division Strike ARTEP, which involves some 5,000 soldiers, 200 tracked vehicles, 1,100 wheeled vehicles and 50 helicopters.

The exercise, which began Sept. 27 and ends Friday, also stresses combined-forces training. Light infantry and heavy-armor units are working together, just as they did during the very real invasion of Iraq this year.

As the sun rose early Monday morning, opposition forces started lobbing simulated artillery at the defensive positions Company B had dug. Two of Hanson&#8217;s tanks were &#8220;hit&#8221; by the rounds &#8212; in this case, an exercise controller tossing a noise-and-smoke device near the tank.

Throughout the morning, radio chatter tracked the progress of enemy units, which used smoke to obscure their advance through the Southern Bowl of the Twin Bridges Training Area.

On Hanson&#8217;s tank, the gunner, Sgt. Jason Kreiling, used thermal- and laser-targeting systems to track enemy engineers as they tried to burst through defensive obstacles. In keeping with the defensive plan, they didn&#8217;t fire until two vehicles were almost down the hill. Destroying those created a bottleneck; Company B called in artillery on the rest of the enemy armor and the rout was on.

Red One, the tank operated by Hanson and Kreiling, finished the engagement with one main-gun round left. The crew had killed at least two Bradleys, two tanks and two engineering vehicles.

About five hours after sunrise, &#8220;end-ex&#8221; was called, signaling that the simulated battle was over. Both sides moved back to their respective tactical assembly areas, rehashed the fight, then planned for the next one.

While battle training was the focus of the Strike ARTEP, Army officials also emphasized safety &#8212; both in the field and in getting to and from Area I bases.

Officers from 2nd ID met with local residents before the exercise to discuss ways to minimize the training&#8217;s impact. Part of that took on the odd sight of military vehicles escorting civilian trucks on a road that directly bisected the day&#8217;s engagement area in the middle of the battle.

&#8220;First-line supervisors are crucial to the safe accomplishment of every mission, from tying down a load correctly to crossing a river safely,&#8221; Maj. Gen. John Wood, 2nd ID commander, wrote in his column for the Indianhead, the division newspaper.