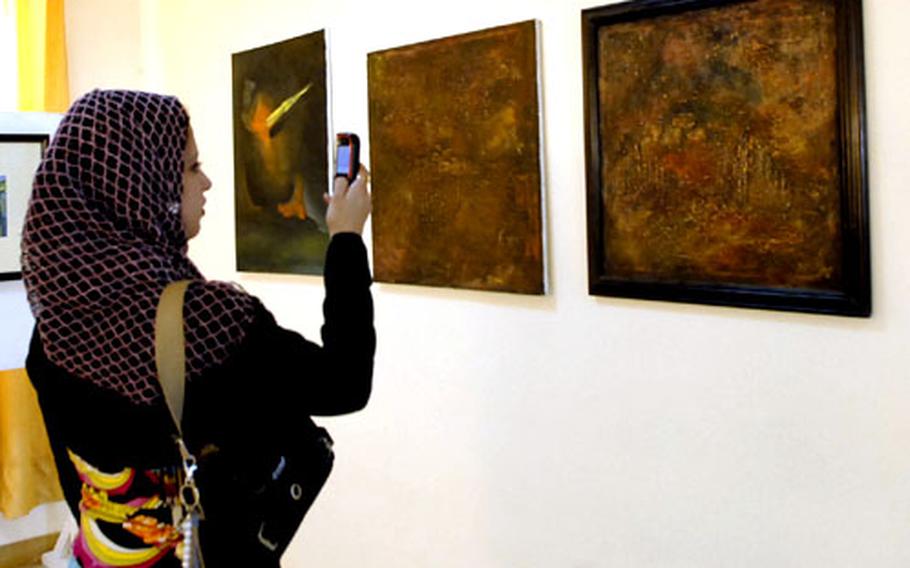 A woman takes a photo of a painting Wednesday at an art show in Baghdad’s Dora neighborhood. The art show opened Wednesday, and organizers hope the return of culture to the neighborhood, which had been torn apart by sectarian violence, will help cement security gains. (Heath Druzin / S&S)

A woman takes a photo of a painting Wednesday at an art show in Baghdad’s Dora neighborhood. The art show opened Wednesday, and organizers hope the return of culture to the neighborhood, which had been torn apart by sectarian violence, will help cement security gains. (Heath Druzin / S&S) 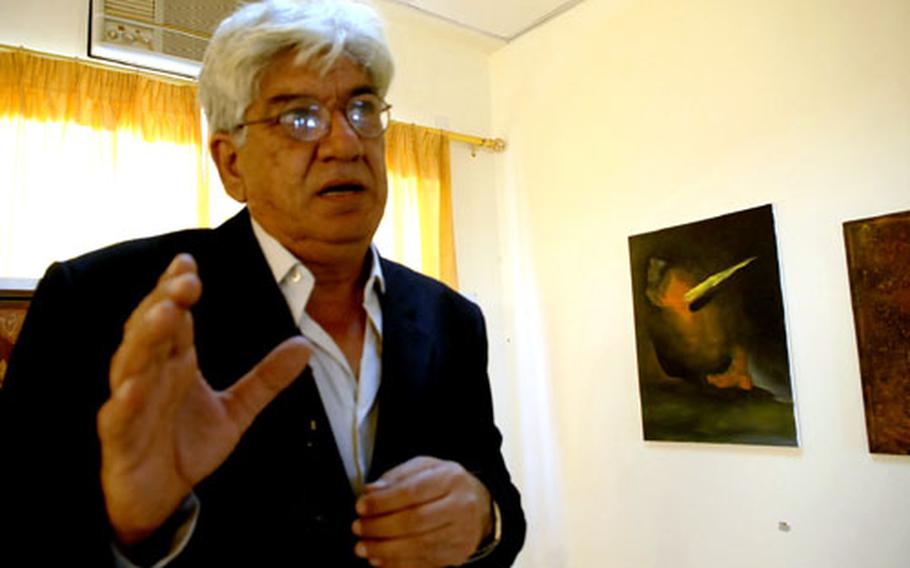 Farouk F. Rafeik speaks in front of one of his paintings at an art show he helped organize in Baghdad Dora neighborhood. (Heath Druzin / S&S)

BAGHDAD &#8212; A bare foot, visible only to the ankle, ascends into a black abyss as a bright yellow comet passes overhead.

The darkness in the painting represents the life that Saddam Hussein stole from Iraq and the comet the hope of peace that U.S. forces brought, says artist Farouk F. Rafeik.

Rafeik&#8217;s work is part of something unthinkable one year ago: an art show in Baghdad&#8217;s Dora neighborhood, once one of the most violent enclaves in Iraq. In 2006 and 2007, the area was the scene of intense fighting, and many Iraqis were chased from their homes based on their religion.

The show opened Wednesday after months of planning by Rafeik and soldiers from the 1st Brigade Combat Team, 4th Infantry Division, who also provided money for the event.

When they first approached artists about the event, the organizers were met with skepticism by people who still associated Dora with sectarian bloodshed, recalls Capt. Brett Walker, who helped coordinate the show. "It took some convincing," he says.

Eventually, so many artists submitted work that organizers ran out of space in the modest room in the Dora Technical College that they used as a gallery. On opening day, a stack of paintings lay against the wall waiting to be rotated into the exhibit, which included paintings and sculptures in an array of mediums and styles.

Dozens of people streamed through the packed room during the first hours of the exhibit, and many more spilled into the hall outside. They looked intensely at the works, discussed them with friends. The only signs that this was no ordinary art show were the Iraqi National Police officers and U.S. soldiers mingling with the spectators.

It&#8217;s important to show the world that Iraqis appreciate culture, says Ahmed Hamid, an engineering student at Dora Technical College who was wandering the exhibit.

Rafeik, who serves as an adviser to Iraq&#8217;s Ministry of Culture, is bespectacled with tousled gray hair and a professorial manner. At 60 years old, he says he remembers when Baghdad was a cosmopolitan city with a flourishing art scene. Saddam changed that by clamping down on artists and restricting what they could create.

"For a long time, I stopped painting," Rafeik says.

Now, he says, Iraqis are beginning to reclaim an artistic heritage thousands of years old. He hopes to continue the slow process of rebuilding Baghdad&#8217;s art scene with another, bigger Dora show in February.

"We have to learn these lessons step by step," he says.

In Rafeik&#8217;s painting of the foot, the comet representing American-secured peace has yet to land. The artist says there is still a long way to go for his city and his country.

"We are starting life now."