The second-story exterior of Baumholder’s city government building was badly charred in an Aug. 11 fire that caused at least 1 million euros in damage. Two Baumholder-based soldiers are suspects in the blaze, but they have not been charged. (Terry Boyd / S&S)

The second-story exterior of Baumholder’s city government building was badly charred in an Aug. 11 fire that caused at least 1 million euros in damage. Two Baumholder-based soldiers are suspects in the blaze, but they have not been charged. (Terry Boyd / S&S) 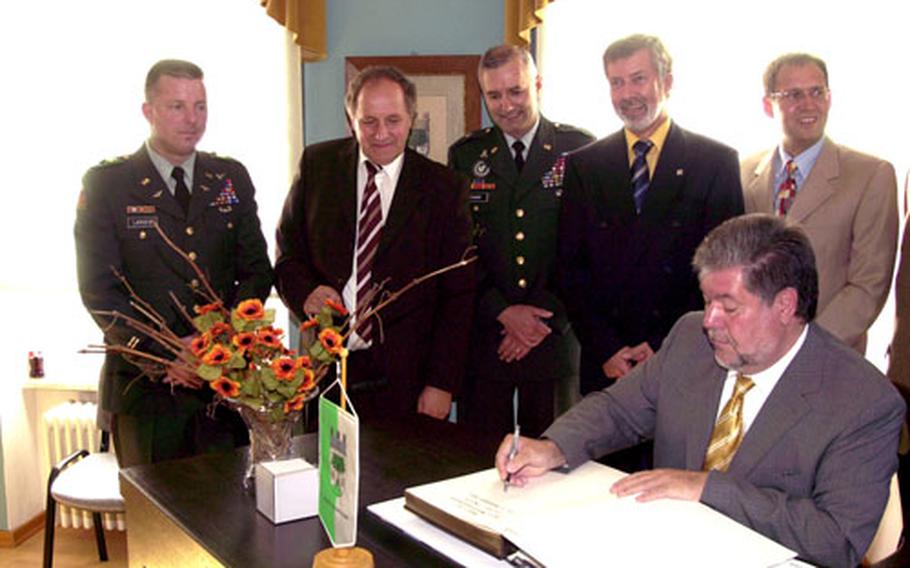 BAUMHOLDER, Germany &#8212; A year of increasingly serious incidents involving U.S. soldiers is testing relations between the Army and Germans in Baumholder.

The tension peaked last month with the arrest of two Baumholder-based 1st Armored Division soldiers in connection with the Aug. 11 arson that caused more than 1 million euros damage to a local government building.

Despite the problems, local German officials are hesitant to criticize the Americans, citing more than 50 years of overall warm relations, reiterating that locals view Americans as family.

With a few dramatic exceptions, today&#8217;s American soldiers are no worse behaved than their predecessors in 1980 or 1990. But those same officials say a volatile combination of booze, drugs and deployments has escalated problems since troops returned from Iraq in July 2004.

After diplomatic prefaces, mayors, police and local residents are blunt: Army officials have to help.

&#8220;We have to attack it as one community trying to solve a community problem,&#8221; said Peter Lang, Baumholder&#8217;s volunteer city mayor, who is also a lieutenant colonel in the German artillery regiment at Lager Aulenbach, next to H.D. Smith Barracks, the main American base. &#8220;If we work on this as a community, then we can solve it.&#8221;

That work has already begun. But so far, it has paid few dividends beyond closer ties between city leadership and the U.S. command.

Tucker sees a small number of soldiers causing most of the problems. The Rathaus fire aside, he sees nothing dramatically different from his days as 1st Brigade commander at Friedberg, other than he rates Baumholder residents as more welcoming and tolerant.

Germans tend to agree, noting that 20 years ago, Baumholder had more American military, three times as many bars and sometimes even more trouble.

But German police and city officials all say soldiers have told them they&#8217;re deliberately taking drugs and getting arrested in order to get chaptered out so they don&#8217;t have to go back to Iraq, a contention Tucker says is laughable.

One reason the problems may seem so intense to local police may be because &#8220;long periods of silent nights&#8221; end when soldiers return from the field, said Capt. Ullrich Dr&#246;scher, head of criminal investigations at Idar-Oberstein regional police headquarters.

Dr&#246;scher said he believes Iraq had a profound effect on base, including one soldier&#8217;s suicide his staff investigated. The violence they saw downrange blurred soldiers&#8217; views of what is acceptable behavior, he said. &#8220;Their tolerance for violence grew greater, but not as bad as I thought it would.&#8221;

Dig deeper, and it&#8217;s apparent there are divergent viewpoints among Germans here, with proximity to the problems roughly correlating to their opinion of Americans.

Baumholder Police Chief Siegfried Meyer recently called American officials to ask when soldiers are coming back from the field in Grafenw&#246;hr and Hohenfels so he&#8217;d be able to pump up his weekend force. Rowdy American soldiers tax his force every weekend they&#8217;re here, Meyer said.

Saturday &#8220;is the day of surprises,&#8221; said Stephane Menne, Lang&#8217;s brother-in-law. Menne lives on Bahnhof Strasse, along the main path between the base and a cluster of bars. Soldiers get drunk during happy hour at pubs around Baumholder&#8217;s city center, &#8220;get all pumped up&#8221; and head down to the clubs to see the lap dancers, Menne said.

When he opens his apartment door Saturday mornings, there are mementos from the night&#8217;s partying, from damaged cars to destroyed flowers and shrubs to vomit on the sidewalk.

It&#8217;s gotten to the point that his wife drives up the road, then down the road before parking, making sure the coast is clear, Menne said. But Menne and others say there is plenty of blame to go around since German youths also join in soldiers&#8217; antics.

Ultimately, &#8220;the problem is inside the base,&#8221; and company and battalion commanders have to start cracking down, Lang said.

Lang, who became mayor in July 2004, said he met with Larsen last October and November, taking him around town to see the problems. Through the winter, &#8220;things calmed down. Then when spring arrived, all the problems started again.&#8221;

Lang went to Larsen and Tucker again at the end of July.

Lang and Pees emphasize that their faith in Larsen and Tucker is unshaken.

Still, Lang is feeling a growing pressure from his constituency to do something. As mayor, he gets 2:30 a.m. calls from townspeople furious about the noise and destruction and wanting to know what he&#8217;s going to do about it.

One night about 11:30, &#8220;I saw five soldiers walking. And one guy was walking like this.&#8221; Lang made snakes in the air with his open hand to show the weaving gait. And while he is walking, he is urinating in the middle of town, he said.

Recently, Baumholder-based soldiers have run afoul of the law. Some of the more grievous examples:

Pfc. Zachary Watson, 18, and Spc. Samuel Bell, 22, are accused of starting a fire Aug. 11 that caused more than 1 million euros in damage to the local government center. Charges have not been filed. Watson and Bell also were allegedly involved in the robbery of a taxi driver earlier the evening of the fire, according to German police.Pvt. Stephen Blazofsky, 18, was charged Aug. 11 by the Army with attempting to murder a 62-year-old German woman. Blazofsky had been drinking heavily for three days when, after being told there was a party at the address, he pushed his way into a Baumholder home where the woman and her husband were sleeping, Police Chief Siegfried Meyer said. Blazofsky was so drunk that the woman was able to fight him off, Meyer said.Pvt. Charles M. Savage, 24, was charged with attempted premeditated murder for stabbing a German woman on April 11. The 31-year-old woman told police Savage had been sleeping on her couch for about three weeks when she awoke to find him sitting on her bed, stabbing her. Savage is also charged with making a false official statement, being away from his unit without leave and breaking a restriction, according to a written release from the 1st Armored Division. He has pleaded not guilty to all charges and has selected to be tried by an enlisted panel.&#8212; Terry Boyd