Arrival pace for Stryker troops, families picks up in Germany 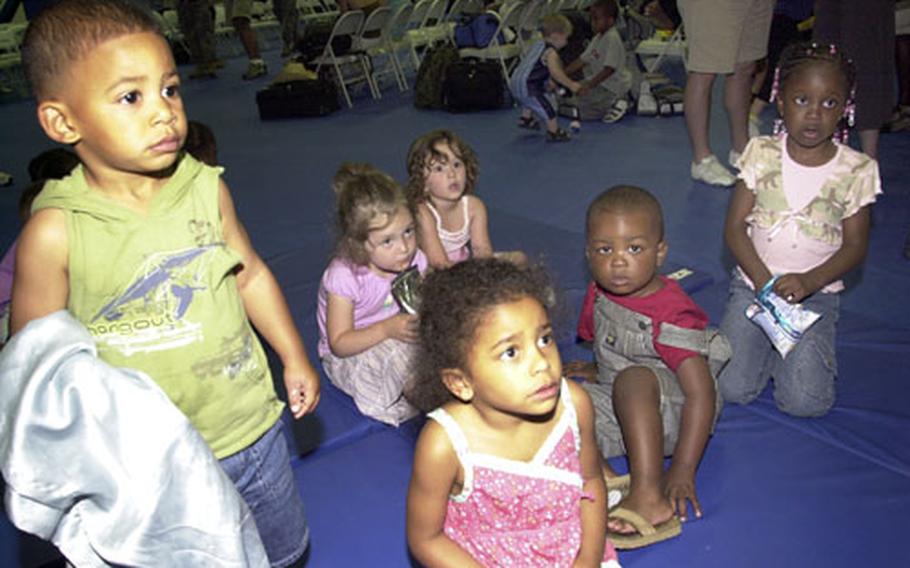 The children of some of the newly-arrived 2nd Cav soldiers watch cartoons while they wait for their parents to finish in-processing. (Seth Robson / S&S)

VILSECK, Germany &#8212; Three hundred 2nd Cavalry (Stryker) Regiment troops and family members arrived in Germany on Tuesday from the States, the largest contingent yet to make the trek to its new headquarters.

During the storm, single soldiers took shelter in large sheds while families kept dry inside a gymnasium.

Dick Cooper, deputy chief of the Directorate for Plans, Training, Mobilization and Security operations at Grafenw&#246;hr, said another 300 soldiers and family members would arrive Wednesday.

Before the back-to-back charter flights, more than 1,000 Stryker soldiers were already on the ground in Vilseck. They arrived with the unit&#8217;s advance party and in smaller groups, he said.

Next week there will be a break for the July Fourth holiday but after that, charter flights of Stryker soldiers will arrive each week until mid-August, when the bulk of the 3,500-strong unit will be in country, he said.

&#8220;The biggest undertaking is trying to get as many people into permanent quarters as we can on their first day in country,&#8221; Cooper said.

Inside the gymnasium, spouses talked to each other while children played or watched cartoons on a big-screen television.

One of them, Capt. Julia Baun, 26, of Buffalo, N.Y., said she had been in Germany for a month and had already visited Wiesbaden and Munich. Baun said she would help new arrivals with transportation and housing issues.

Another 2nd Cav soldier, Spc. Cameron Vickery, 19, of Ark City, Kan., was also helping new arrivals. On Tuesday he was responsible for two single soldiers whom he was showing around.