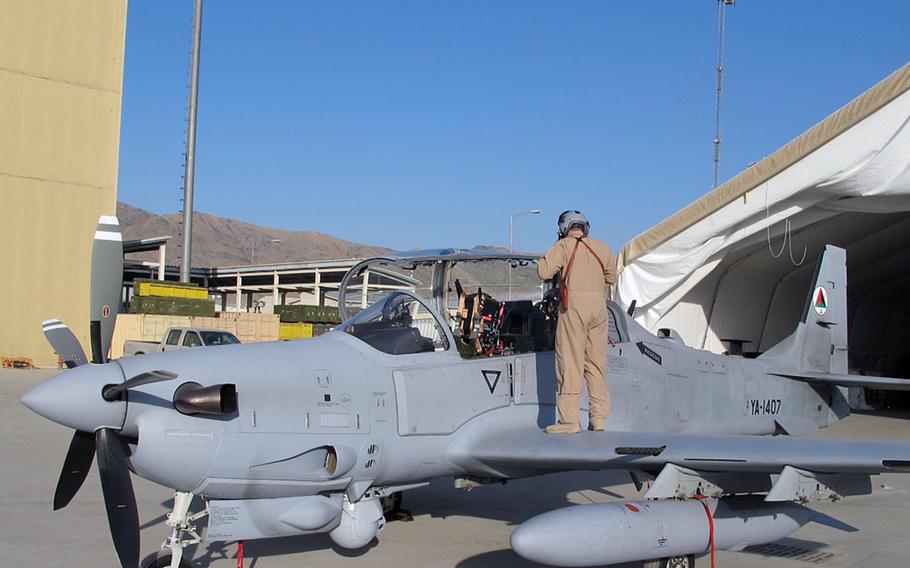 Buy Photo
Two pilots check out on a newly delivered Embraer A-29 Super Tucano at Kabul military airport on Feb. 4, 2016. The light ground attack aircraft are described as a major boost to the Afghan air force's capabilities because they are its first warplanes that can carry bombs. (Slobodan Lekic/Stars and Stripes)

Buy Photo
Two pilots check out on a newly delivered Embraer A-29 Super Tucano at Kabul military airport on Feb. 4, 2016. The light ground attack aircraft are described as a major boost to the Afghan air force's capabilities because they are its first warplanes that can carry bombs. (Slobodan Lekic/Stars and Stripes) 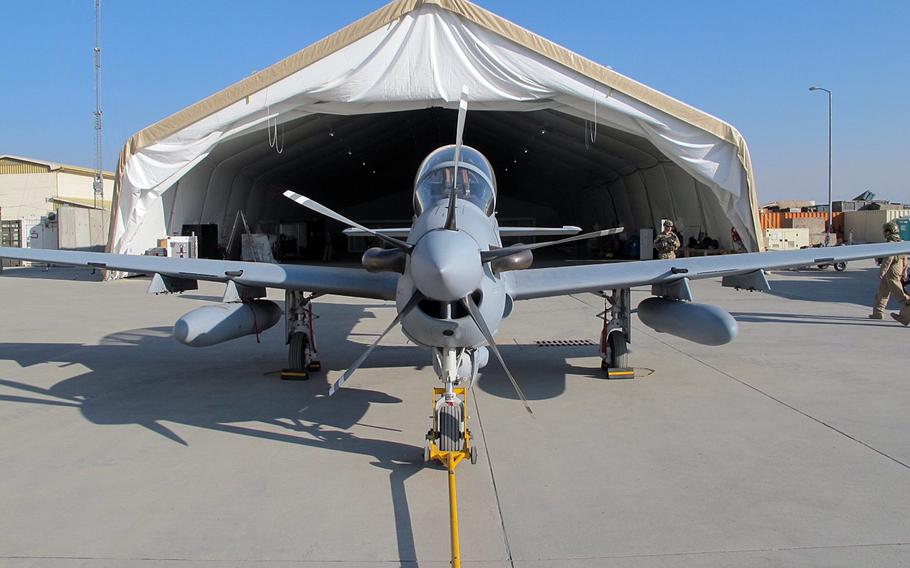 Buy Photo
Frontal view of a newly delivered Embraer/SNC A-29 Super Tucano of the Afghan air force at Kabul military airport on Feb. 4, 2106. The tandem-seat turboprop has five hard points on its wings and fuselage, and can carry rockets, bombs and pods for 20 mm automatic cannons. (Slobodan Lekic/Stars and Stripes) 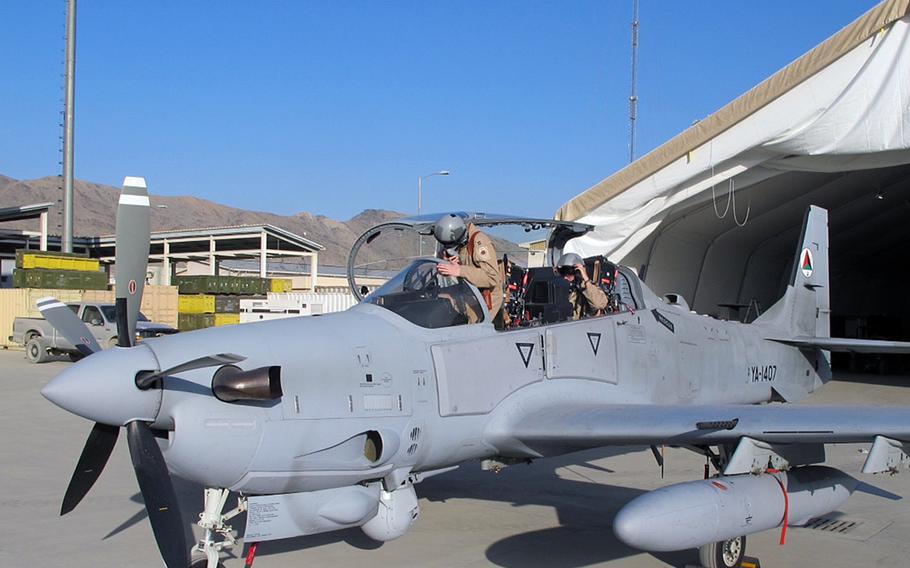 Buy Photo
Two pilots practice on a newly delivered A-29 Embraer/SNC Super Tucano light counter-insurgency aircraft at Kabul military airport on Feb. 4, 2015. Four Super Tucanos were delivered to the Afghan air force on Jan 15, the first of 20 on order. (Slobodan Lekic/Stars and Stripes) 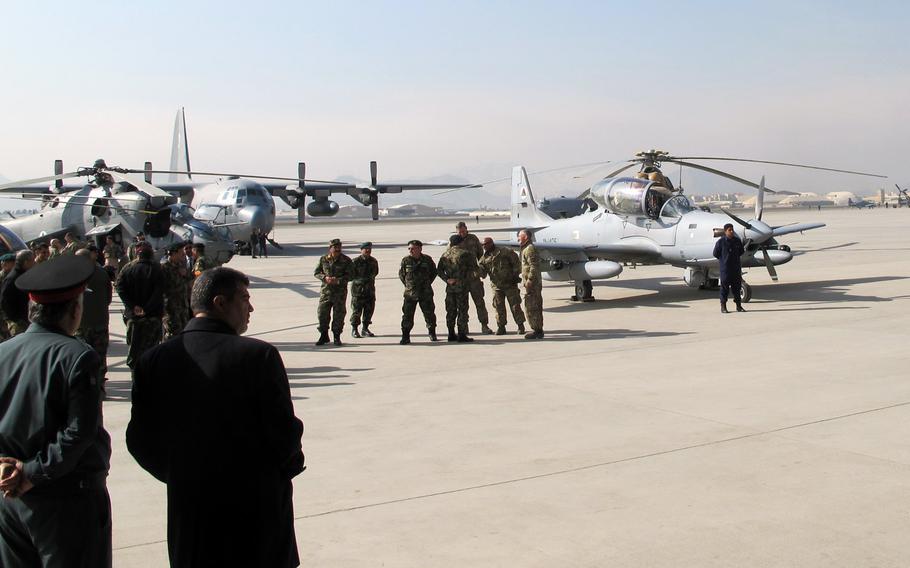 Buy Photo
An A-29 Super Tucano takes center stage at an Afghan air force ceremony on Feb. 11, 2016. The light attack aircraft represents a milestone in the growth of the flying service, which in the past did not possess aircraft of dropping bombs on ground targets. (Slobodan Lekic/Stars and Stripes) 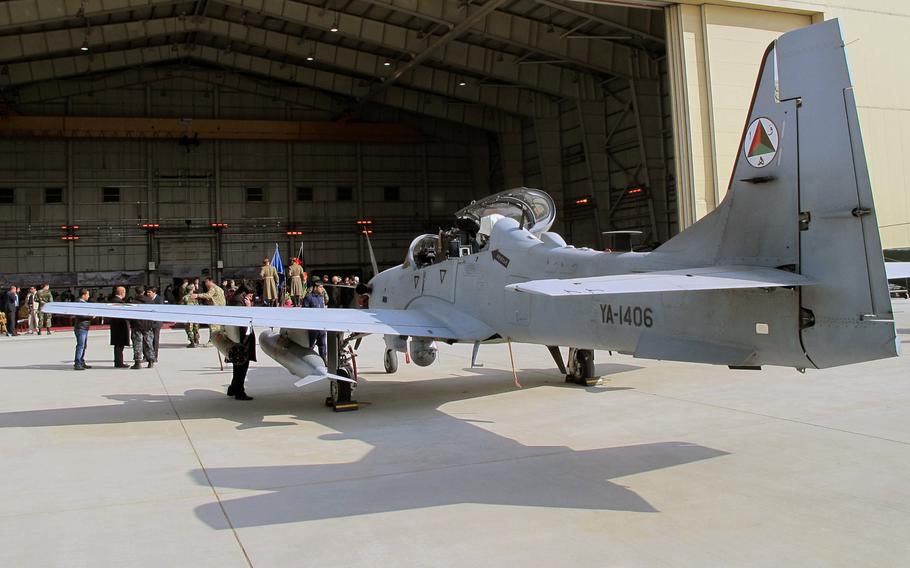 Buy Photo
An A-29 Super Tucano counter-insurgency aircraft at its roll-out at an Afghan air force ceremony on Feb. 11, 2016. President Ashraf Ghani attended the display and fly-past of aircraft in the service's inventory. (Slobodan Lekic/Stars and Stripes) 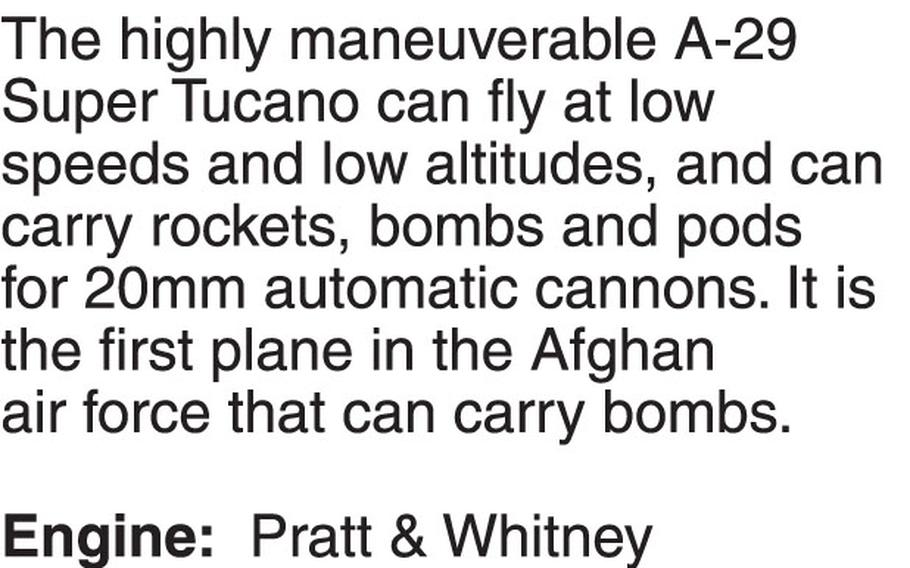 KABUL, Afghanistan — Afghan leaders and U.S. military commanders are hailing the arrival of the Afghan air force’s first four light-attack aircraft as a major boost to the nation’s military capabilities.

“Today, one of Afghanistan’s wishes has been fulfilled,” President Ashraf Ghani said Thursday during a ceremony to mark the rollout of the Embraer/SNC A-29 Super Tucano. “The first phase of rebuilding the Afghan air force has now been completed.”

The Super Tucanos will be the first Afghan warplanes capable of delivering 250- and 500-pound free-fall and laser-guided precision bombs, a vital requirement in interdicting and defeating the Taliban guerrillas.

The A-29 is also armed with two wing-mounted, .50-caliber machine guns. In addition to the bombs, it can carry pods equipped with two more machine guns, a 20 mm automatic cannon or air-to-ground rockets.

The planes are scheduled to go into action in late March or early April, when four more will be delivered. In all, 20 aircraft are on order under a U.S.-funded $427 million contract and are to be delivered by 2018.

Defense Minister Masoom Stanikzai said the planes are likely to be used first in southern Helmand, the opium-rich province where the Taliban have taken large swaths of territory from overwhelmed government forces, and in the eastern province of Nangarhar, where Islamic State militants have been trying to establish a foothold.

With the formal end of the NATO combat mission at the end of 2014, most allied air assets were pulled out, and the new rules of engagement for the smaller train-and-advise Resolute Support mission limit what coalition aircraft can do.

That has left many of the missions they performed to the Afghan air force, a service re-established as part of the armed forces in 2008.

Casualty evacuations and the ferrying of troops, ammunition and supplies have fallen to the fledgling Afghan air force and its fleet of helicopters, light transports and freighters.

That’s where the new Super Tucanos are expected to excel. The tandem-seat turboprops are optimized for ground-attack missions in Afghanistan’s hot, high and dusty environment. The planes are equipped with sophisticated avionics, including head-up displays, computer-controlled all-glass cockpits and infrared thermal-imaging devices that help pilots detect objects on the ground at night or in fog. They can also carry a large bomb load and can loiter for long periods over potential targets.

The first Super Tucanos to arrive were accompanied by their four pilots, who trained at Moody Air Force Base, Ga., for the past year, and by a group of maintainers who spent nine months at the base. Plans call for a total of 30 pilots and 90 maintainers to be trained at Moody by 2018.

“I am very proud to be part of this effort,” said Siawash, an electronics maintainer who just returned to Kabul in January after a nine-month training course at Moody. He declined to give his full name due to concern about possible Taliban threats to him and his family.

The Afghan fliers were accompanied back to Afghanistan by American pilots and mechanics from the 81st Fighter Squadron, a training unit based at Moody. All the U.S. instructors are former fighter-bomber pilots with considerable experience on A-10 Thunderbolt IIs, F-15E Strike Eagles and F-16 fighter bombers.

“We’re not only teaching them how to fly and maintain airplanes but also advising them how to stand up the attack squadron and integrate it into the wider war effort,” said Jason, an Air Force lieutenant colonel who gave only his first name as he could not be fully identified under Air Force rules.

The introduction of the A-29 was a key “building block” that will not just boost the capabilities of the air force and the Afghan military, which relies on air support, but will also familiarize Afghan crews with an advanced aircraft and allow them to transition to even more sophisticated jets in the future, coalition officers said.

“We’re giving them a capability with advanced avionics. The A-29 is well-suited for this place and will enable them to utilize the expertise for other platforms down the road,” said Brig. Gen. Chris Craig, commander of the U.S. and NATO mission to train the Afghan air force. “This is just a tough, tough place to fly airplanes in, (and) the A-29 was the right airplane right now.”