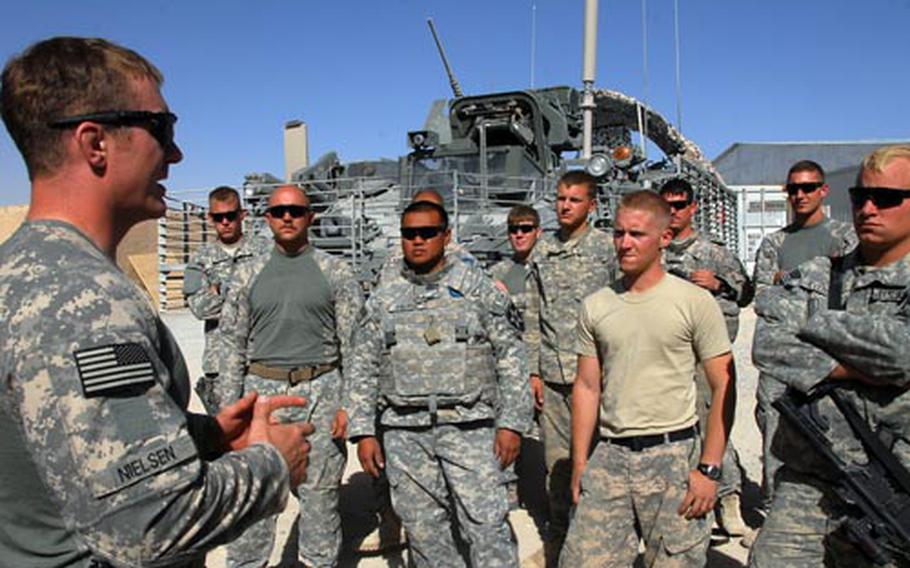 First Lt. John Nielsen of the 2nd Platoon, 52nd Infantry Regiment, 5th Stryker Brigade Combat Team of Fort Lewis, Wash., briefs his soldiers Tuesday for an afternoon mission patrolling Qalat, the capital of Zabul province in Afghanistan. The Stryker brigade arrived in the province for the first time roughly a month ago, representing an increase in troop strength in an area of Afghanistan that previously did not get a lot of military attention. (Sandra Jontz/ S&S)

First Lt. John Nielsen of the 2nd Platoon, 52nd Infantry Regiment, 5th Stryker Brigade Combat Team of Fort Lewis, Wash., briefs his soldiers Tuesday for an afternoon mission patrolling Qalat, the capital of Zabul province in Afghanistan. The Stryker brigade arrived in the province for the first time roughly a month ago, representing an increase in troop strength in an area of Afghanistan that previously did not get a lot of military attention. (Sandra Jontz/ S&S) 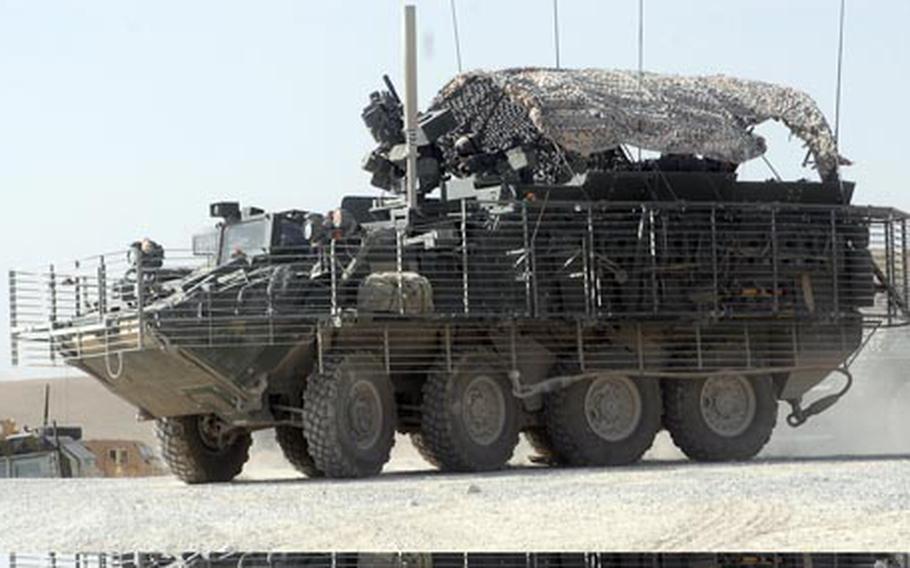 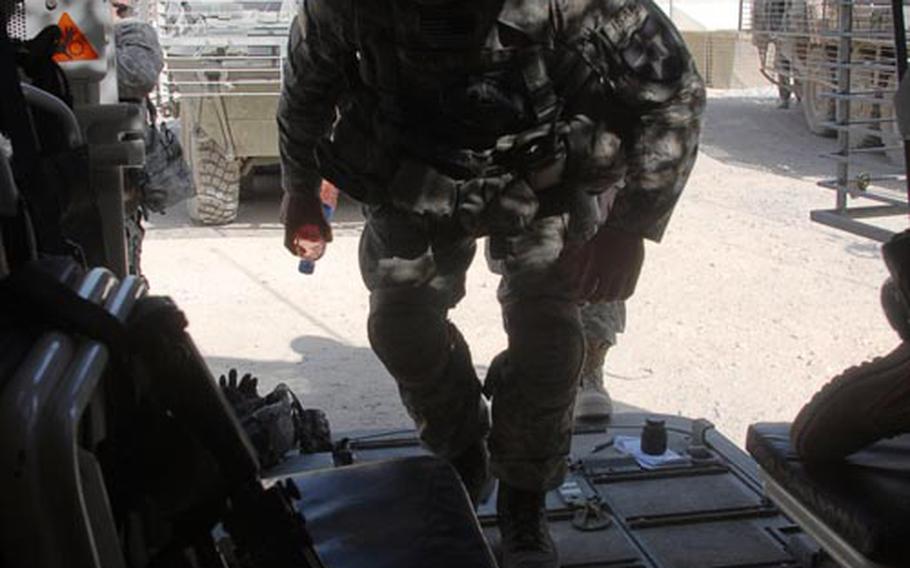 Load up and get ready to roll, 1st Lt. John Nielsen, leader of 2nd Platoon, 52nd Infantry Regiment, 5th Stryker Brigade Combat Team, told his soldiers moments before getting into a Stryker vehicle Tuesday for a patrol mission in various areas of Qalat, in Zabul province. (Sandra Jontz / S&S)

ZABUL PROVINCE, Afghanistan &#8212; It&#8217;s the forgotten province in a nation time seems to have forgotten.

And until the recent boost of U.S. forces to Afghanistan, it&#8217;s the province that the military paid less attention to than others in this ongoing war.

But that is changing with the recent arrival of the 5th Stryker Brigade Combat Team, 2nd Infantry Division, out of Fort Lewis, Wash. &#8212; the first Stryker brigade to be deployed to the rural, poverty-stricken 6,500-square-mile province in southeastern Afghanistan.

"The one thing about Zabul province that has been a challenge is the lack of ISAF combat power quite frankly. ... There just hasn&#8217;t been enough of it," said U.S. Army Lt. Col. Karl Slaughenhaupt, who arrived about a month ago to take over Task Force Zabul from the Romanian contingent, which ran International Security Assistance Force operations out of Forward Operating Base Lagman for three years.

"Zabul had been a lesser priority, and probably for good reason. There had been bigger fish to fry, so to speak, in other areas, and that has been the focus," he said. "Now with additional combat forces, we can cover down on Zabul."

"Zabul is a transit area for insurgents, for drug smugglers and has been a safe haven for anti-coalition forces," Tanase said.

Slaughenhaupt&#8217;s approach will mirror tactics used in Iraq &#8212; sending in troops to clear the small villages and valleys, and setting up combat outposts so troops can stay put.

"First we will try to deny the enemy access to the population, and then hunt the enemy down and deal with them when we have to," he said.

"What we want to do is marginalize [the threat]. Marginalize the enemy by denying access to resources, which is the populace.

"Our goal is that locals will feel more comfortable about sharing information about enemy activity, movement. Every indication I get from the government here is that the vast majority of the people in this province are not happy with the Taliban, [but] they have not been able to resist the enemy&#8217;s efforts to coerce them.&#8217;&#8217;

The brigade has been on the ground roughly one month, and it&#8217;s too early to measure success or failure rates, he said.

The biggest threat to coalition forces and the population in Zabul province are roadside bombs, or what the military calls improvised explosive devices.

"IEDs clearly are the enemy&#8217;s favorite choice of means to attack us," said Slaughenhaupt, a 23-year Army veteran.

"They&#8217;re getting more sophisticated than they have been in the past. Part of the reason for that is that they are trying to attack specific targets."

Slaughenhaupt cited the increased use of remote-controlled detonations, which allow insurgents to attack Afghan and ISAF forces.

In addition to neutralizing threats, the sailors look for trends, determine how bombs are made, and recommend countermeasures, said team leader Lt. Paul Mahoney.

Meanwhile, two recent suicide bombings in the town of Shajoy might signal a new threat in the province and point to an influx of foreign fighters, said Slaughenhaupt, who also serves as the BCT&#8217;s deputy commander.

The first bomber killed two people including a civilian and injured 17 others on Aug. 4, according to news reports. The second attack injured a dozen U.S. troops and a translator on Aug. 29.