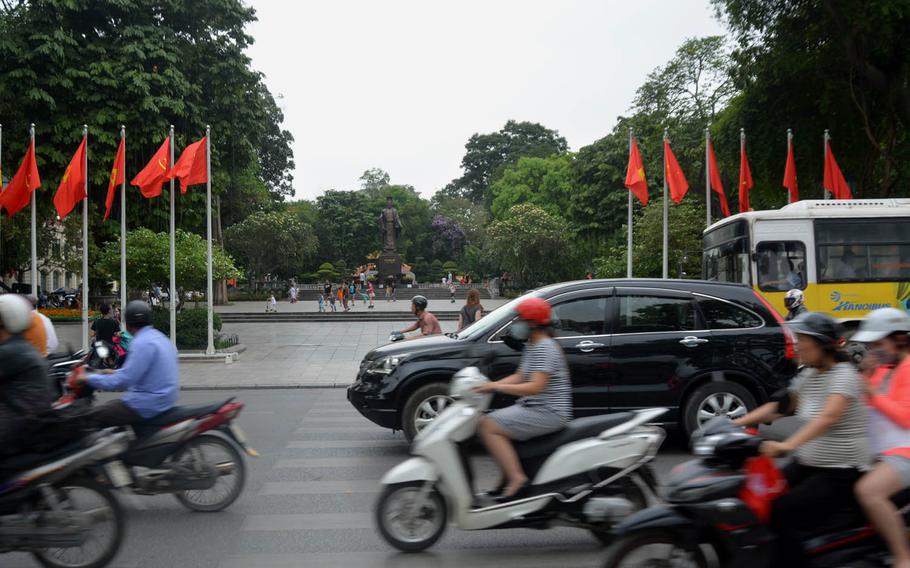 SUVs and buses compete with throngs of motorcycles as they drive by monuments and parks in Hanoi, Vietnam, on Thursday, May 18, 2016. The U.S. is considering fully lifting an arms-sale embargo despite lingering concerns among Congress and human rights groups about the Vietnamese record on individual freedoms, particularly regarding freedom of speech. (Erik Slavin/Stars and Stripes)

SUVs and buses compete with throngs of motorcycles as they drive by monuments and parks in Hanoi, Vietnam, on Thursday, May 18, 2016. The U.S. is considering fully lifting an arms-sale embargo despite lingering concerns among Congress and human rights groups about the Vietnamese record on individual freedoms, particularly regarding freedom of speech. (Erik Slavin/Stars and Stripes) 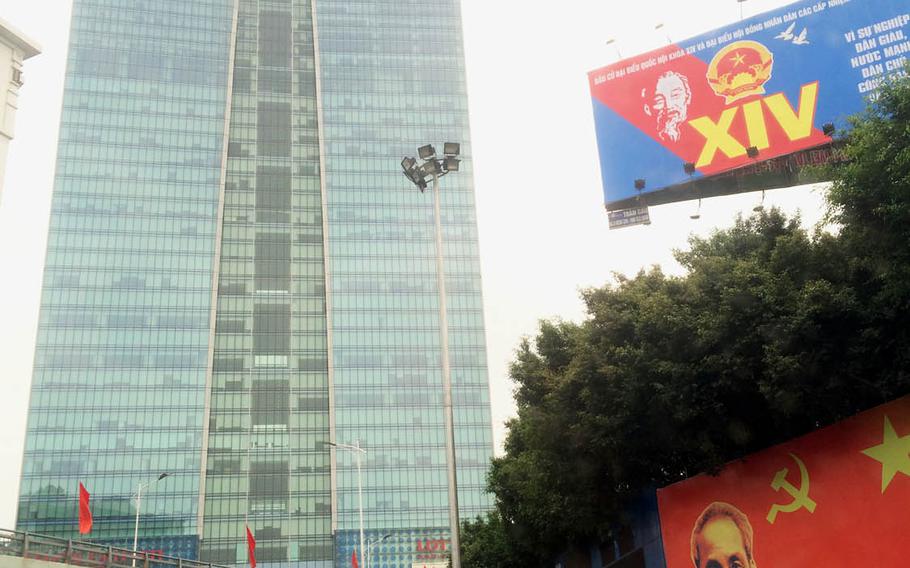 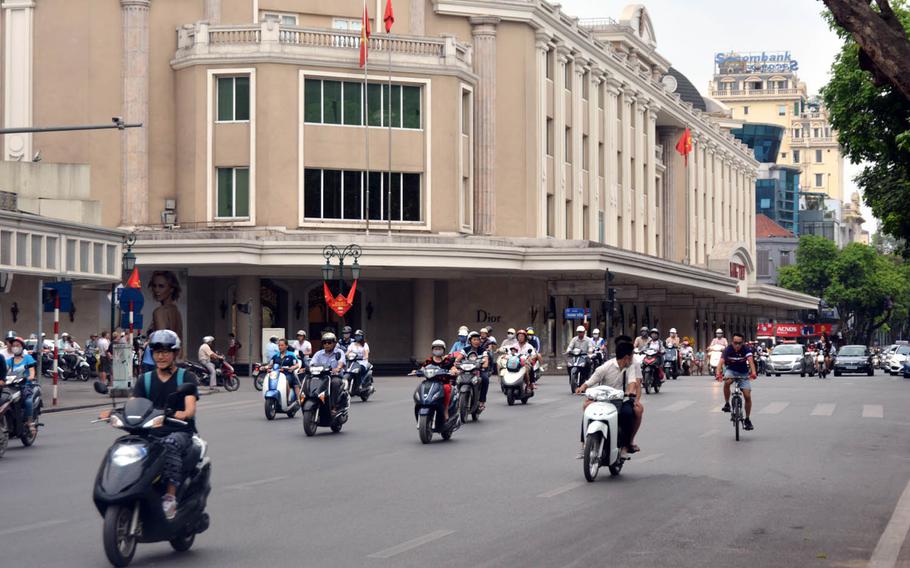 Motorcycles and mopeds swarm by a mall featuring high-end fashion brands from the western world in Hanoi, Vietnam's capital, on Wednesday, May 18, 2016. When President Barack Obama begins talks with leaders in Vietnam on Monday, he will see a country where the United States is popular among its people, but where the government crafts a careful balancing act between Washington and Beijing. (Erik Slavin/Stars and Stripes)

HANOI, Vietnam — When President Barack Obama arrives for talks with Vietnam’s leaders, he’ll see a country where the United States is popular among its people — but where the government crafts a careful balancing act between Washington and Beijing’s competing interests.

To say that today’s Vietnam bears little resemblance to the one the U.S. fought a war with decades ago does not go far enough. Development is so brisk in parts of major cities that it’s hard to recognize some of the same neighborhoods from just a year ago.

When the U.S. sent its first postwar ambassador to Vietnam in 1997, about 40 percent of the population lived under the poverty line. By 2012, that figure had dropped to 11 percent, according to U.S. figures.

Perhaps the biggest shift in relations comes on defense issues, where the U.S. is considering fully lifting an arms-sale embargo despite lingering concerns between Congress and human rights groups about Vietnam’s record on individual freedoms, particularly regarding freedom of speech.

And while the Vietnam War is mainly a history lesson to much of Vietnam’s youth, how America deals with the war’s legacy — unexploded ordnance, dioxin and health disabilities — remains an important barometer of trust for the Southeast Asian nation.

Multiple officials and analysts in Vietnam’s security establishment hope to hear Obama talk with officials Monday about China’s militarization of the South China Sea, where it has built artificial islands atop reefs also claimed by Vietnam and other countries in the region.

The U.S. Navy has repeatedly transited near the islands — despite Chinese protests — to assert its freedom-of-navigation rights in an area of critical economic importance.

“I do expect the Obama visit to have some positive impact on the region, especially in respect to the South China Sea,” said Tran Cong Truc, who oversaw past territorial disputes with China as Vietnam’s Border Department chief. “The U.S. has taken many steps so far, but the Chinese side is still doing things its own way, as usual.”

Lifting the arms embargo would allow the U.S. to sell Vietnam more maritime surveillance technology, an area where China has considerably more capability. Sales could include aircraft like the submarine-spotting P-3 Orion, which the U.S. is phasing out.

“Even if there is a total lifting of the ban, the U.S. can always reject a sale,” said Carl Thayer, a regional security consultant and professor emeritus at the University of New South Wales in Australia. “It doesn’t mean Vietnam is walking into the coffee shop and getting whatever it wants.”

Meanwhile, human rights groups maintain that the U.S. should not strengthen the Vietnamese military while the country continues to arrest political opponents. Vietnam sentenced seven bloggers and activists to prison in late March for crimes such as “conducting propaganda against the state,” according to Human Rights Watch.

On May 9 and 10, State Department official Tom Malinowski went to Hanoi to “urge Vietnam to release political prisoners without condition.”

Pete Peterson, ex-prisoner of war and first U.S. ambassador to Vietnam of the postwar era, told Stars and Stripes in a recent phone interview that Vietnam shouldn’t be judged on an absolute scale.

The country started from a very low point in the ‘80s and ‘90s, Peterson said. It is widely seen as tolerant of gay people and has done much to lift the population out of poverty.

“Vietnam isn’t doing all it could be doing on human rights, but compared to a lot of other countries, it is not doing so badly,” Peterson said.

Conservatives within Vietnam’s ruling Communist Party use such arguments to persuade rivals within the party to avoid getting closer to the U.S. Even advocates of closer U.S. relations talk of balancing great power relations.

Another popular argument among conservatives is that the U.S. hasn’t done enough “to heal the wounds of war,” Thayer said.

This has been largely undercut by increases in U.S. funding for environmental cleanup and health care, said Thao Griffiths, country representative for the Vietnam Veterans of America Foundation.

The group, which works with multiple branches of Vietnam’s government to address those issues, saw its funding from the State Department double last year.

Earlier this month, the first phase of a $100 million project to remove Da Nang airport of contaminants was completed, with much of that funding contributed by the U.S., Griffiths said.

The next constructive step would be remediation of Bien Loa, an air base near Ho Chi Minh City used heavily by the U.S. during the war in a densely populated area.

“Within the U.S./Vietnam relationship, collaboration on dioxin cleanup and supporting people with disabilities is among the highest priorities” for Vietnam’s government, Griffiths said.