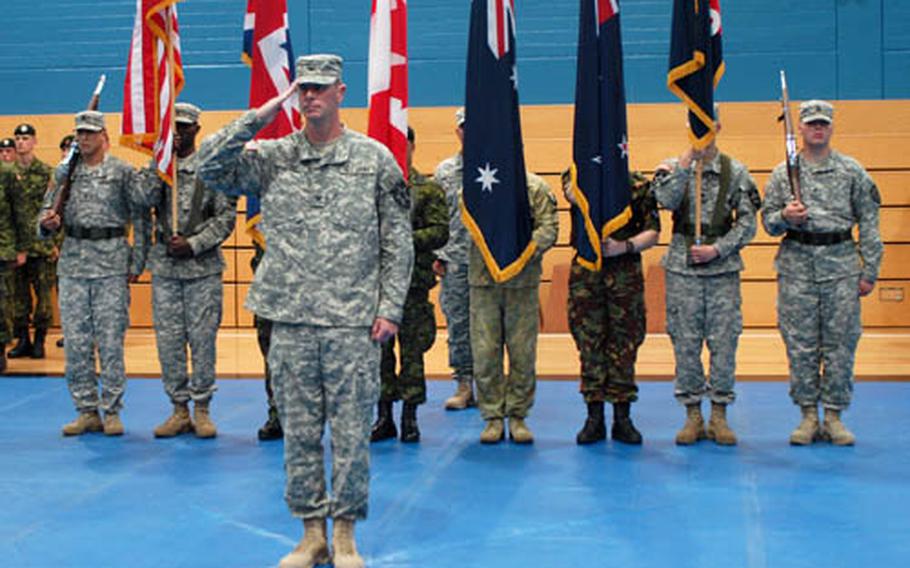 Soldiers from the U.S., Britain, Canada, Australia and New Zealand parade at Hohenfels, Germany, on Friday to kick off a month-long exercise. (Seth Robson / S&S)

HOHENFELS, Germany &#8212; Soldiers from the U.S., Britain, Canada, Australia and New Zealand will spend the next month at the Joint Multinational Readiness Center testing their ability to cooperate in a combat environment.

ABCA Armies &#8212; an organization that promotes interoperability between the five nations &#8212; is overseeing the exercise, which involves almost 2,000 personnel and runs until Oct. 8.

During the training, soldiers from the Fort Lewis, Wash.- based 3rd Stryker Brigade, 2nd Infantry Division and the other ABCA nations will conduct operations as if they are in Afghanistan and respond to simulated attacks conducted by 1st Battalion, 4th Infantry Regiment soldiers playing the role of Taliban insurgents.

The five ABCA nations have troops serving in Afghanistan and all have had troops in Iraq in recent years.

Australian Army Col. Shane Amor, chief of staff of the ABCA Armies program, said the organization was created in 1947 in response to issues that arose during World War II.

Initial members were Britain, Canada and the U.S. Australia joined in 1968 and New Zealand joined in 2006, he said.

"At the end of the day the five nations have similar values but different national identities and different ways of doing business and bring different capabilities to the fight," he said.

ABCA Armies analyzes issues that can hinder the armies from working together and recommends fixes, Amor said.

The Hohenfels exercise is designed to test ways to integrate computerized command and control systems used by the various armies, he said.

One of the 3rd Stryker Brigade soldiers in Germany for the training, Sgt. Harrison Barber, 21, of St. Louis, said he was excited to be there.

The Strykers got back from Iraq in September last year and expect to deploy again soon, Barber said.

If the unit heads to Afghanistan, which the Army says in unlikely, Barber could find himself working closely with troops from another ABCA nation.

Does Barber know the name of the white bird depicted on the New Zealand soldiers&#8217; shoulder patches? "No."

Barber said he doesn&#8217;t think there is much difference between a 21-year-old from St. Louis and one from another ABCA country.

"We like to play football and basketball or go to the mall and go shopping or hang out with friends," he said.

But there are a few differences. The New Zealand and Australian soldiers were excited about a big rugby match between the two nations at the weekend.

Lt. Col. Peter Connolly, of the 1st Battalion, Royal Australian Regiment said there are plans for soldiers from the different nations to play each other using different football rules.