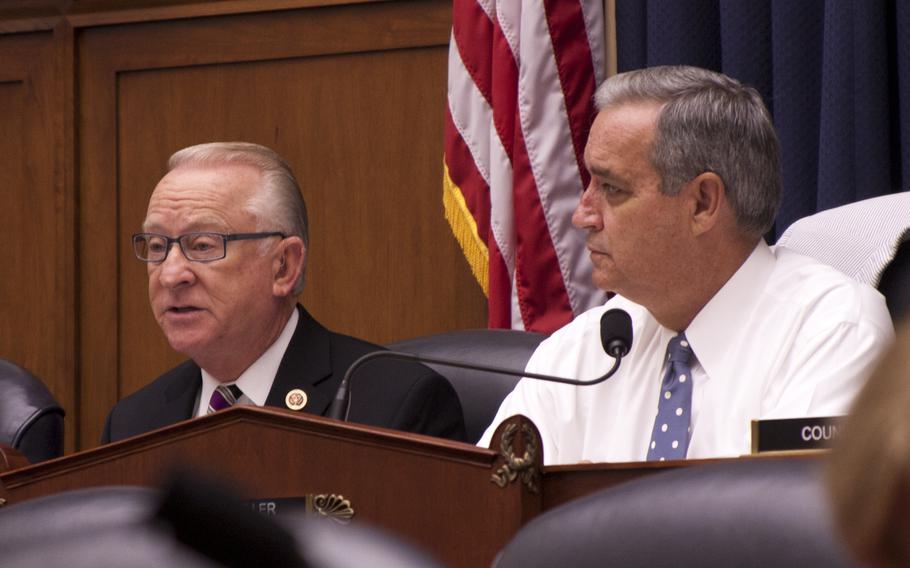 Rep. Buck McKeon, R-Calif., chairman of the House Armed Services Committee, speaks at a joint Congressional hearing with the Defense Department and Department of Veterans Affairs on July 10, 2013 in Washington, D.C. McKeon announced he will not seek re-election in fall 2014, ending his 20-year congressional career. (C.J. Lin/Stars and Stripes)

WASHINGTON — The next session of Congress will open with two new armed services committee chairmen and plenty of postwar problems to tackle.

McKeon had served in that role for the last three years, and as the House education committee chair for two years before that. Republican rules mandate six-year term limits for committee leadership positions, and he said stepping into a lesser role next session forced him to reassess another run for public office.

Last March, Senate Armed Services Chairman Carl Levin, D-Mich., announced his plans to retire at the end of 2014. He has led that committee since 2007, the longest run of any senator since Georgia Democrat Sam Nunn in the early 1990s.

Levin is 79, McKeon 75. Both are stepping away as the Pentagon winds down the war in Afghanistan and girds itself for ongoing funding fights with a Congress focused on deficit reduction.

McKeon wants to avoid being seen as a lame duck chairman, announcing a defense spending efficiency review, plans for several member trips to Afghanistan, and a goal of reforming the military’s handling of sexual assault cases.

But he also gave a nod to one potential successor, committee vice chairman Mack Thornberry, R-Texas. The 18-year congressman was in the running for the chairmanship when McKeon was selected, and has made public his desire to take over for McKeon.

“I expect (Thornberry) to run, and I expect him to win,” McKeon said. “I think he’d make an excellent chairman.”

Sen. Jack Reed, D-R.I., is the presumptive replacement for Levin. The Senate Armed Services Committee has outlined similar ambitious plans for its upcoming year, including a review of the recent military retirement cost-of-living cuts passed as part of a budget deal last month.

Among his accomplishments, McKeon highlighted last month’s passage of the annual defense authorization bill. It’s the 52nd consecutive year Congress has passed that military legislation, a record unmatched by any other legislative priority and a point of pride among committee members.

In a statement, the House Armed Services Committee’s ranking member, Rep. Adam Smith, D-Wash., praised McKeon for his bipartisan approach to issues and willingness to engage with political opponents.

“Buck set a tone on this committee that the rest of Congress should seek to emulate,” he said.