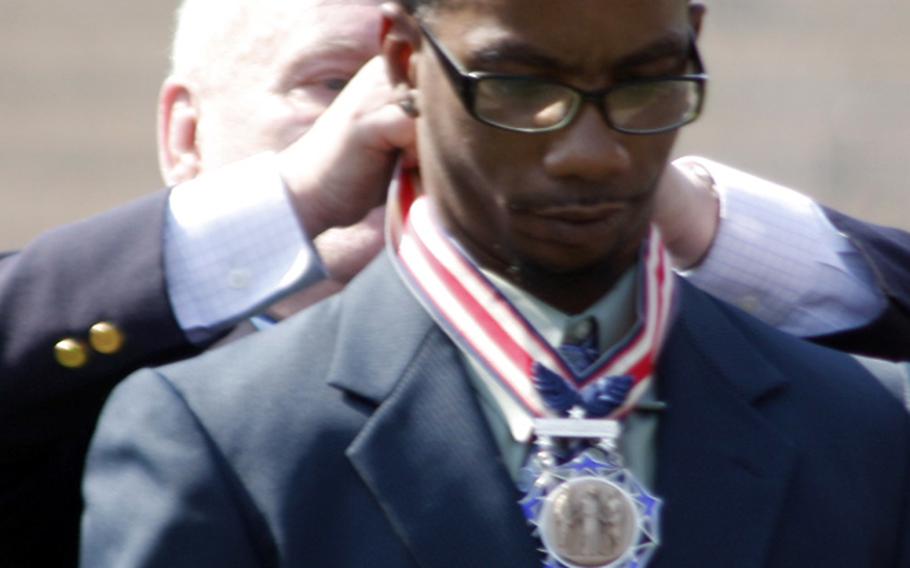 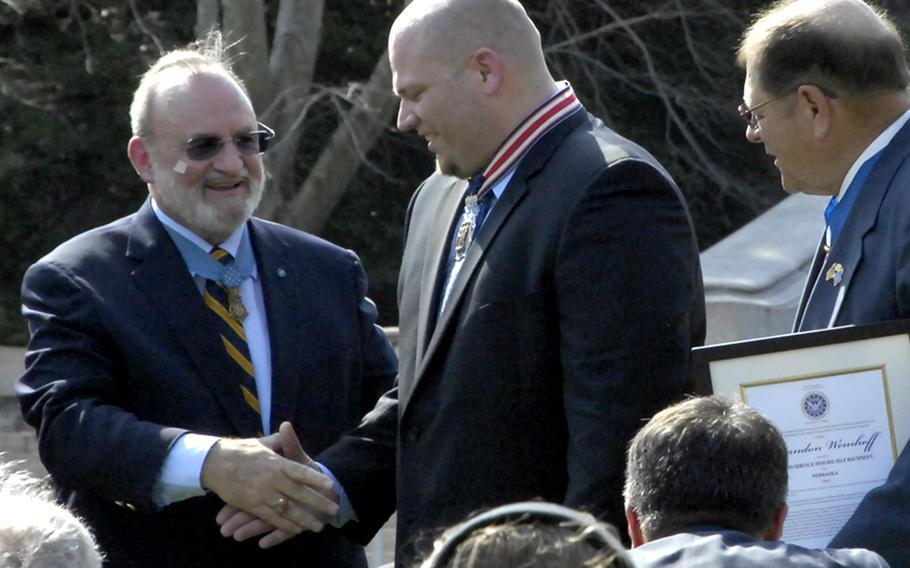 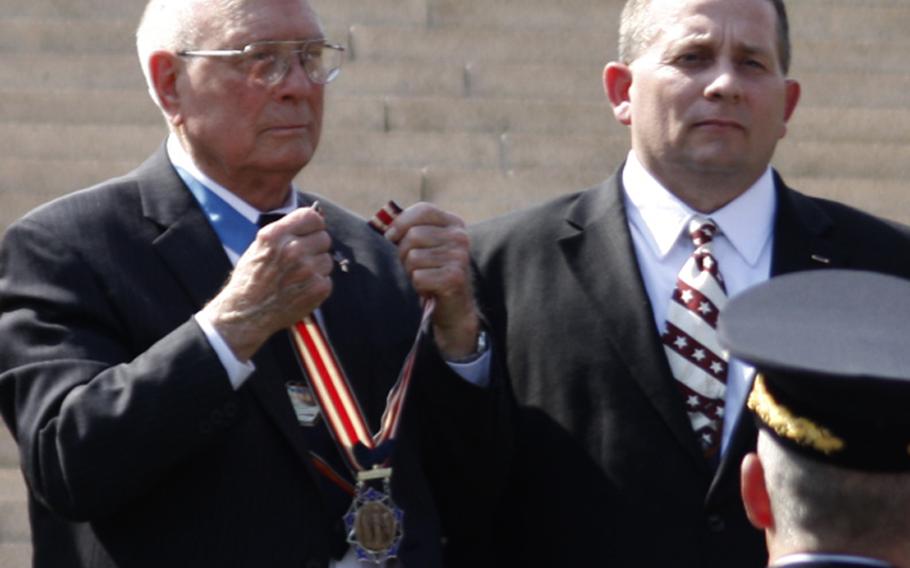 Buy Photo
James McCormick listens as his citation is read. Ready to present him with his medal is World War II Medal of Honor recipient and fellow West Virginian Hershel Williams. (Rick Vasquez/Stars and Stripes) On Friday, he and fellow living Medal of Honor recipients honored three civilians who Brady said &ldquo;are the kind of people that we fought for.&rdquo;

The ceremony at Arlington National Cemetery was the fifth annual Citizen Service Before Self Honors, a way to recognize &ldquo;everyday people who become extraordinary,&rdquo; Brady said.

Every American has the responsibility to put others in front of themselves, and there are many acts of courage and sacrifice every day, said retired Gen. Richard B. Myers, former chairman of the Joint Chiefs of Staff.

The awards are a way to &ldquo;recognize those among our citizens who are truly heroes,&rdquo; Myers said.

James McCormick of New Haven, W.Va., helps homeless veterans find jobs and housing through his nonprofit organization, Raising Cane Farms. McCormick retired from the Army after 22 years because of an injury.

Montel Mixon of St. Paul, Minn., rescued a woman from her burning home after she had been locked in the bathroom by her boyfriend, who set the house on fire. Mixon fought off the boyfriend inside the burning home to break down the door and get the woman and her two children to safety.

Brandon Wemhoff of Lincoln, Neb., risked his life to prevent a robbery in a drug store. Wemhoff saw a man walk in wearing a ski mask and carrying a handgun, and he started to throw things at the man to distract him. When the man pulled out a knife, Wemhoff grabbed the man, disarmed him and pinned him down until the police arrived.

In addition to the Citizen Service Before Self awards, the Congressional Medal of Honor Foundation and Society honored teenager Spencer Zimmerman with the American Spirit Award.

Zimmerman, an Eagle Scout, took his friend Dayton Howard with him on a triathlon. Howard has cerebral palsy and can&rsquo;t walk or talk. Still, Zimmerman and Howard completed the 500-meter swim, 12-mile bike and 5K run together, in 1 hour and 28 minutes.

The idea behind the awards came up more than a decade ago recognize the good that happens every day, said Brian Thacker, who earned a Medal of Honor in Vietnam.

&ldquo;For a long time, it was just a great idea,&rdquo; Thacker said, but it didn&rsquo;t come to fruition until the start of the Congressional Medal of Honor Foundation.

The recipients wanted to model the award on their own medal, knowing that people &ldquo;take the calculated risk&rdquo; every day.

&ldquo;Certainly it&rsquo;s uncomfortable being up on the pedestal all the time,&rdquo; he said, but this is a way they can use that platform to honor others who would otherwise remain unsung.