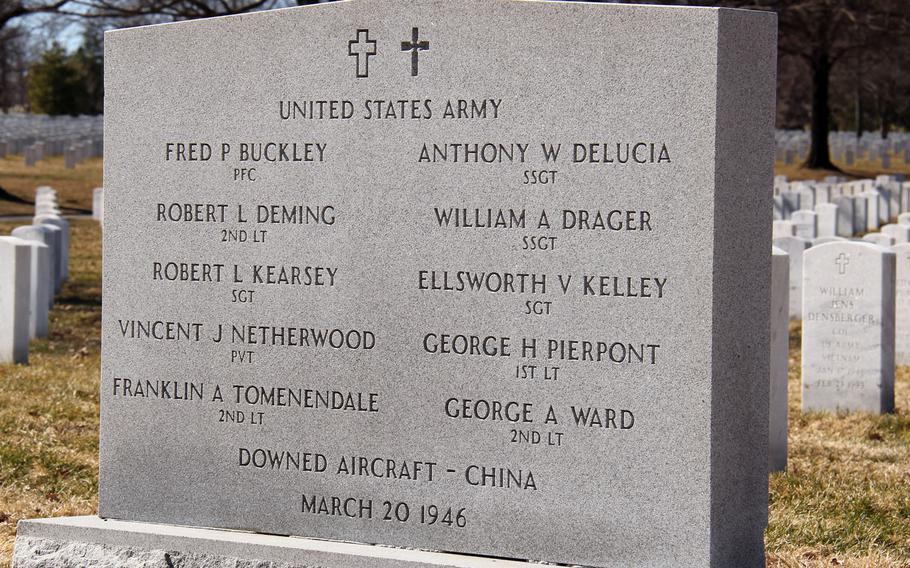 Managers at Arlington National Cemetery in Virginia for years resisted the entreaties of family members to change the date on a marker commemorating the crew of a B-24 that crashed in China on Aug. 31, 1944, instead keeping the date they were officially declared dead by the Army. The cemetery announced it is changing the date. (Rick Vasquez/Stars and Stripes)

WASHINGTON — A long struggle to make gravestones at Arlington National Cemetery reflect reality rather than bureaucracy apparently has a happy ending for families of a World War II bomber crew lost during a mission in August 1944.

For 12 years, some families of the crew fought to get the date on the monuments changed, as recounted by Stars and Stripes in May.

Family members repeatedly argued to cemetery and Army personnel officials that gravestones that obscured the reality of the combat deaths of the 10 crewmen dishonored them. But the efforts never amounted to anything.

Until now. An Arlington cemetery official told Stars and Stripes that the Army now has the evidence it needs to correct the monuments to show to real date of death.

“Arlington National Cemetery will be replacing the current marker, changing the date of death to August 31, 1944, in accordance with the amended date of death provided by Department of the Army after a formal request for review by the Board of Correction to Military Records,” Arlington cemetery spokeswoman Jennifer Lynch told Stars and Stripes in an email. “We have initiated the reorders for all seven markers” — those for six individual crew members buried at the cemetery and one large monument with commingled remains, she said.

The unofficial leader of the group of families pushing for the change, retired Navy Capt. James Drager, whose father was among the crew, called it a great relief. Younger generations of his family would have continued the fight to get Staff Sgt. William Drager’s date of death right after he was gone, James Drager said.

“I actually had my adult sons and my teenage grandsons geared up to continue this fight for as long as it needed, because they’ve been watching me for years,” he said.

The fate of the crew was a mystery for more than 5 decades.

After bombing a harbor on Formosa, now called Taiwan, the damaged plane disappeared, and the Army declared the crew dead in March 1946. But in 1996, farmers hunting herbs on a mountainside in China’s Guanxi province found twisted wreckage and bones of the crew.

After recovery, six members of the crew were buried at Arlington in 2000, and commingled remains were buried in a common gravesite. The funeral was both solemn and spectacular, Drager remembers. But when he visited the site with family a year later — after the monuments had been put in place — he was shocked to see the 1946 date.

He notified other family members around the country, who were similarly disturbed.

“These guys deserve a World War II date on their grave for eternity — not a 1946 weather balloon accident,” J.D. Deming, nephew of 2nd Lt. Robert Deming, navigator on the flight, told Stars and Stripes earlier this year.

After the Stars and Stripes story ran in May, several staffers in the offices of U.S. legislators in whose districts crew family members live began probing the issue, as did Greg Gardner, the Army’s Past Conflict Repatriations branch chief, Drager said.

Stars and Stripes could not reach Gardner by deadline for this story.

The Army got information from the Central Identification Laboratory-Hawaii, which oversaw the recovery, that allowed the service to issue new official findings of the date of death, Drager said.

Lynch said the cemetery expected to have delivery of the seven new markers within three to four months, and put them in place within days once all are received.

Deming said he was glad the process didn’t drag out any longer — but August 2014 is a fitting month to finally make the fix.