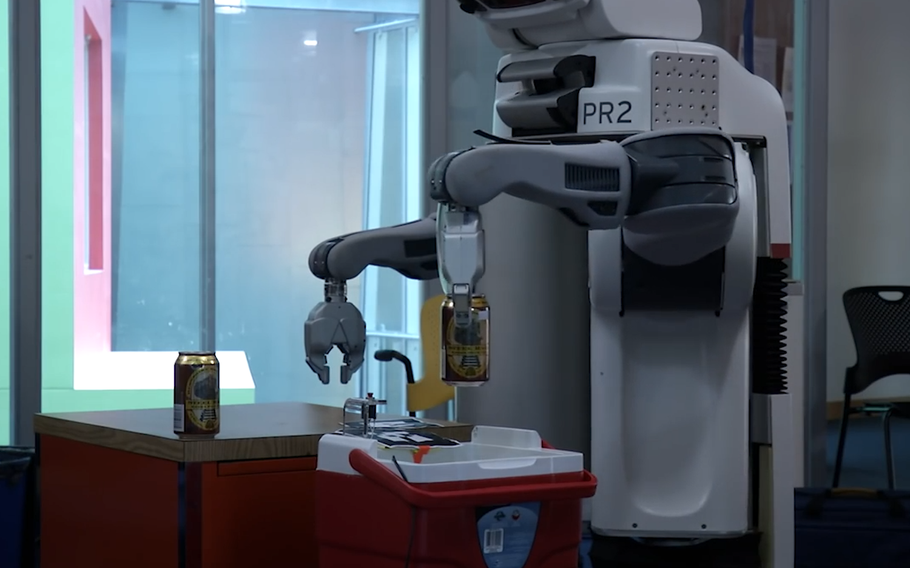 This screengrab from a MIT Computer Science & Artificial Intelligence Laboratory video shows a robotic bartender. Republican senators are proposing an amendment to a defense spending bill that would bar the Pentagon from spending any more money on research to produce such robots. (MITCSAIL/YouTube)

WASHINGTON — Robots might be taking over the world, or just trying to tend bar, but not on the Pentagon’s dime if the two senators from Arizona have their way.

Republican Sens. Jeff Flake and John McCain pushed for an amendment to defense spending legislation that would bar the Pentagon from continuing to spend money on research to produce “beerbots,” or robot bartenders.

“Did you hear the one about three robots that walk into a bar?” asked Flake, while flanked by the image of the futuristic bartenders. “No, you haven’t. It’s not a joke but rather a project paid for in part by the Department of Defense.”

Flake, who filed the amendment earlier this week, took to the Senate floor Thursday to argue for the measure ahead of a vote on the defense spending bill that would direct more than $670 billion towards a wave of Defense Department increases, including a 2.6 percent servicemember pay raise, plus new gains in the number of troops, equipment and weapons for the 2019 fiscal year.

The so-called “minibus” appropriations measure, H.R. 6157, is part of a larger package of more than $850 billion to fund labor, health and human services and education priorities. It will also fund priorities directed in the recently passed 2019 National Defense Authorization Act, which directs policy and spending plans for the Defense Department.

Flake, who cosponsored the amendment with McCain, the chairman of the Senate Armed Services Committee who has been battling brain cancer and away from Washington since December, said the Defense Department shouldn’t be worrying about robots serving drinks.

The Pentagon could fund grants that help universities to further research on the automation of U.S. jobs, such as the robotic bartenders, which slowly have made appearances at bars and even Royal Caribbean cruises in recent years. And schools such as the Massachusetts Institute of Technology have long worked with the Defense Department to develop robots and other technology.

“With our national debt exceeding $21 trillion, taxpayers should not have to pick up the Pentagon’s tab for “beerbots” and other unnecessary items which were in the bill we’re considering now,” Flake said.

The senator has been pushing for a series of amendments to cut nearly $500 million in spending from H.R. 617, such as a limit on funding for purchases of littoral combat ships and the now-delayed military parade. For example, Flake is pushing for the purchase of one LSC ship rather than the two authorized in the NDAA.

But most of Flake’s amendments were not slated for a debate ahead of a vote on the funding measure.

“I’m disappointed that I’m unable to call up any of my amendments and debate the merits of these items and the importance of addressing our out-of-control debt,” he said. “We need to get serious about how we’re spending taxpayer money. We need to open up the debate and allow real debate on our national priorities.”

Flake, however, held out hope the “beerbots” amendment could be included in a package of amendments slated to be added to the legislation. Shortly before H.R. 617 passed Thursday, the "beerbots" amendment was included.

“This may be the last call for the beerbots,” he said.

The legislation now goes to a congressional conference committee to be reconciled with its House version before requiring votes in both chambers. If approved, the legislation goes to the president for his signature.