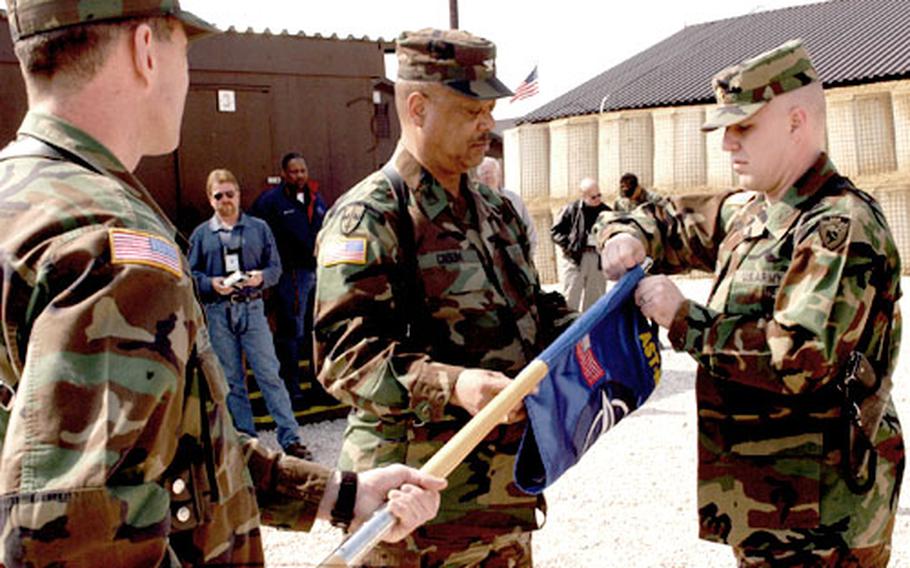 FORWARD OPERATING BASE McGOVERN, Bosnia and Herzegovina &#8212; An epoch of peacekeeping from Camp McGovern ended when its Area Support Team folded the guidon flag on Tuesday.

Maj. Robert Leasure of 2nd Army Command, the last commander at McGovern, was sorry to leave and apologized for teary eyes to a modest group gathered for the ceremony.

It is no surprise the event was emotional for Leasure, who has spent a year at the camp and seen it reduced from a busy place full of soldiers to a ghost town.

Most of the other troops departed within the last two months.

The AST, a part of Area Support Group Eagle, has maintained the camp and made sure that soldiers stayed focused on their mission since September 2001, Leasure said. The team took care of 500 troops deployed to the camp and 200 extras during surge periods.

McGovern was home to thousands of troops over the years. Since its establishment in December 1995, the camp was key to bringing peace to the nearby town of Brcko, whose destiny was undecided in the peace agreement that ended the war. Protests and riots between ethnic groups and even against troops were not uncommon during the first few years of peacekeeping.

A large American flag has flown high at the camp for years. The area has progressed significantly, and a decision to turn it into a &#8220;cold base,&#8221; with only civilian guards and minimum maintenance staff, was made earlier this year. A budget of only $10,000 was allocated for the camp in 2004 and less than $3,000 has been spent.

The last soldier to leave the camp when it closes later in the year will be Master Sgt. Larry Fisher, who has worked with Leasure.

Fisher, of the 1st Squadron, 167th Cavalry Regiment, 35th Infantry Division, first arrived in February 2003 for a peacekeeping rotation with SFOR 13. After six months patrolling the country, he visited home for a month and returned to the camp to serve with AST.

Leasure and Fisher also tried to help some of the local civilians find other jobs when those at McGovern ended.

Leaving the country in the next few days, Leasure will leave behind many friends.

And for the first time in his life, Leasure had to give up something the military teaches troops to fight for with their lives: the guidon flag.

But Leasure got to keep the flag in the end. Croom handed it over to him later in the day.